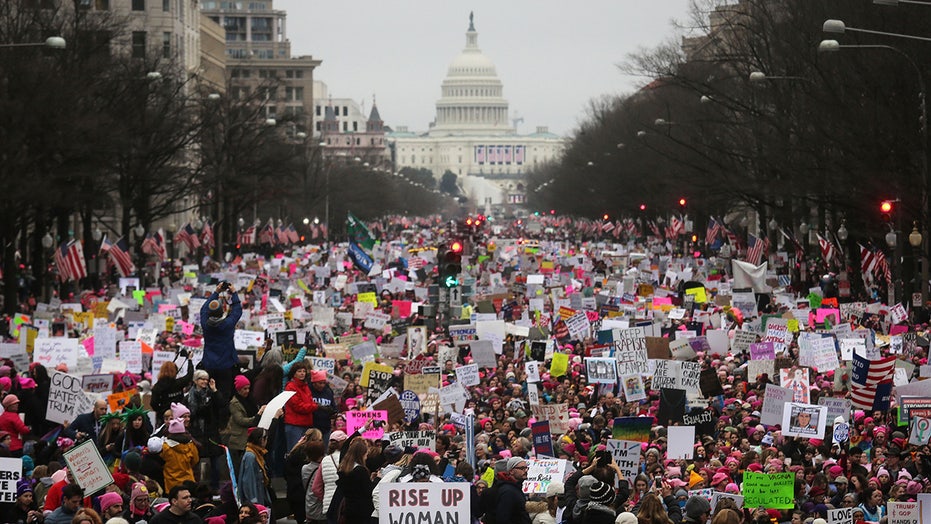 The National Archives confirmed this week that it had blurred out signs in a photograph on display of the 2017 Women’s March in Washington, D.C., that is now showcased at the museum -- a move for which it later apologized.

The photograph in question -- on display as part of an exhibit celebrating the centennial of women’s suffrage -- shows the 2017 march down Pennsylvania Avenue the day after President Trump was elected. The image, taken by Getty Images photographer Mario Tama, shows the street crammed with marchers, many showing anti-Trump signs.

WASHINGTON, DC - JANUARY 21: Protesters walk during the Women's March on Washington, with the U.S. Capitol in the background, on January 21, 2017 in Washington, DC. Large crowds are attending the anti-Trump rally a day after U.S. President Donald Trump was sworn in as the 45th U.S. president. (Photo by Mario Tama/Getty Images)

But The Washington Post first reported that many of those placards have been blurred out. Placards that read “God Hates Trump” has “Trump” blurred. Other signs that refer to women’s anatomy are altered, according to the Post. One that said “If my vagina could shoot bullets, it’d be less REGULATED” has “vagina” blurred out while one that says “This P***y Grabs Back” has that obscenity blurred out.

In a statement to the Post, it said archivist David Ferriero -- appointed by former President Barack Obama in 2009 -- supported the decision.

“As a non-partisan, non-political federal agency, we blurred references to the President’s name on some posters, so as not to engage in current political controversy,” Archives spokeswoman Miriam Kleiman told The Post. “Our mission is to safeguard and provide access to the nation’s most important federal records, and our exhibits are one way in which we connect the American people to those records. Modifying the image was an attempt on our part to keep the focus on the records.”

But the move was criticized by others. Rice University historian Douglas Brinkey told the Post there was no reason to alter a "historic photograph."

"If they don't want to use a specific image, then don't use it. But to confuse the public is reprehensible," he said. "The head of the Archives has to very quickly fix this damage. A lot of history is messy, and there's zero reason why the Archives can't be upfront about a photo from a women's march,” he said.

The National Archives later apologized for the decision.

“We have removed the current display and will replace it as soon as possible with one that uses the unaltered image,” the statement said. “We apologize, and will immediately start a thorough review of our exhibit policies and procedures so that this does not happen again.”

The furor came as new Women’s Marches were scheduled to take place in Washington, D.C., New York and in other cities across the country.