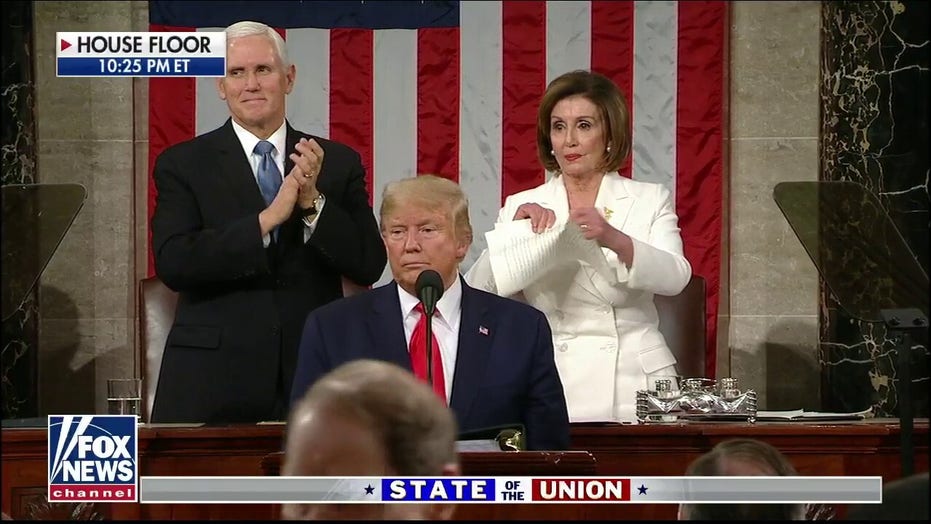 House Speaker Nancy Pelosi, D-Calif., apparently did not enjoy President Trump's State of the Union address, tearing her printed copy of the speech immediately as the president wrapped up his remarks Tuesday night.

When Fox News asked her afterwards why she did it, she responded: "Because it was the courteous thing to do considering the alternatives." She added: "I tore it up. I was trying to find one page with truth on it. I couldn't."

On the heels of an impeachment trial, which is expected to end in an acquittal in the Senate on Wednesday, tension was palpable between Pelosi and Trump. The president apparently "snubbed" the speaker when she tried to shake his hand as he handed printed copies of his address to her and to Vice President Mike Pence.

The ripping of the speech sparked lots of other reactions across social media.

"Disappointed to see @SpeakerPelosi rip up the speech that mentioned lives we’ve lost and heroes we celebrated at the SOTU. No matter how you feel or what you disagree with, remember others are watching. This was unbecoming of someone at her level in office," former U.N. ambassador Nikki Haley said.

"NEW  LOW FOR NANCY PELOSI: She ripped up @realDonaldTrump's #SOTU speech for the cameras on national TV. This speech was about American heroes and American workers. She decided THAT was worth literally tearing apart. Absolutely disgraceful," House Republican Whip Steve Scalise condemned the speaker.

"House Speaker Pelosi just ripped up Trump’s speech at its conclusion. Hardcore base will cheer it, many will see it as classless and petty," The Hill media reporter Joe Concha reacted.

"Pelosi literally tearing up the speech as Trump walks away without facing her," Huffington Post senior writer Jonathan Cohn summarized the icy ending to the address.

Rep. Gerry Connolly said Trump took “a hatchet and whacked away what little was left of that bridge” of bipartisanship.

"It was a shameful, destructive and divisive speech," Rep. Gerry Connolly, D-Va., said. "…I don't think I've ever seen the chamber as clearly divided as it was tonight."

"I think the number one issue in this country is health care and he just lied about it," said Rep. Lois Frankel, D-Fla., who was among the Democrats throwing their hands up in disgust at Trump’s healthcare remarks and chanting “H.R. 3.” “I mean he's in court trying to get the Affordable Care Act thrown out so that people with pre-existing conditions are not protected.”

Others cheered on Pelosi's move.

"Do y’all understand that Nancy Patricia D'Alesandro Pelosi RIPPED UP that crap speech and tossed it on the dais like the trash that it was WHILE that cretin was still speaking. And she did it ON CAMERA! @SpeakerPelosi is a real one!" actress Yvette Nicole Brown praised the speaker.

"We just saw the moment of the night. Speaker Pelosi ripped up her copy of Trump’s speech as he concluded his remarks," MSNBC legal analyst Glenn Kirschner wrote.