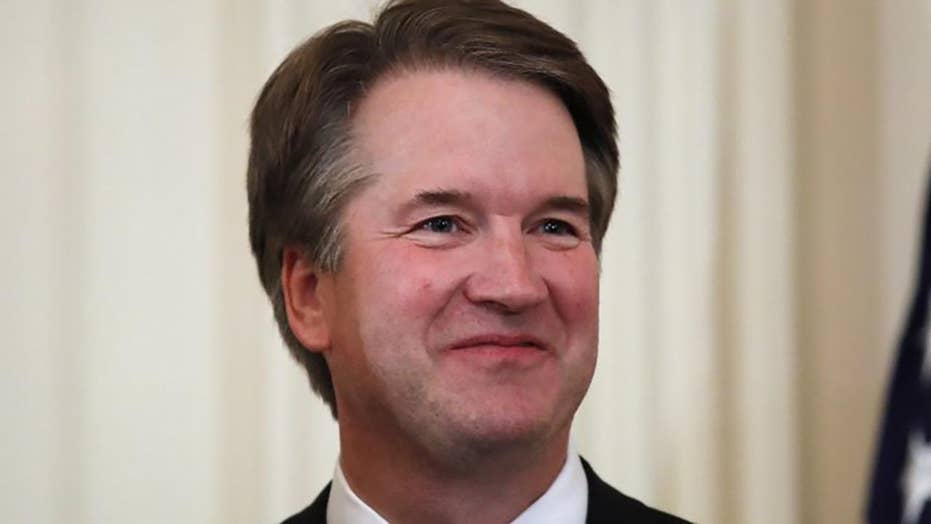 Nadler's request came days after a liberal lion of the high court, Associate Justice Ruth Bader Ginsburg, defended Kavanaugh as a "very decent, very smart individual," and long after progressive activists have largely moved on to other matters.

Rep. Doug Collins, R-Ga., said in a statement that Nadler's request is so "far outside the scope of judicial ethics, it’s harassment."

In this July 10, 2018, photo, protesters hold signs supporting Planned Parenthood in Seattle and against Brett Kavanaugh's nomination to the Supreme Court.

Nadler, along with Hank Johnson, D-Ga., wrote to the National Archives to seek "certain presidential records related to Justice Brett M. Kavanaugh’s service in the White House from 2001 to 2006."

They cited the Presidential Records Act, which allows congressional committees to obtain “contain information that is needed for the conduct of [their] business and that is not otherwise available," subject to executive privilege and other limitations.

Tens of thousands of documents relating to Kavanaugh's time in the White House Counsel's Office were withheld during his confirmation process, the lawmakers said, after they were processed by a private attorney for potential privilege issues.

"As a result of this process, the Senate Judiciary Committee received only a small fraction of Justice Kavanaugh’s White House record before voting on his nomination," Nadler wrote.

Nevertheless, some of Kavanuagh's writings in the Bush administration did play a central role during his confirmation process. In a dramatic exchange during the hearings, Sen. Cory Booker, D-N.J., now a presidential candidate, implied that Kavanaugh had been open to racial profiling tactics, citing an email exchange between Kavanaugh and a colleague in the Bush White House.

Carrie Severino, co-author of 'Justice on Trial: The Kavanaugh Confirmation and the Future of the Supreme Court,' says there were no real winners in the fight to confirm Brett Kavanaugh.

Booker did not provide Kavanaugh a copy of the emails to review, and claimed Republicans had tried to hide them. However, Senate Republicans said the documents had been publicly released earlier in the day, even as Booker suggested he could be expelled from the Senate for releasing them.

The emails released later on during the hearings showed Kavanaugh advocating for race-neutral security screening policies at airports after 9/11, but said that during an "interim" period before such policies could be implemented, administration lawyers would need to "grapple" with the possibility of factoring in race during screenings in the interest of national security.

In his letter, Nadler sought the new documents on a "rolling basis," and specifically asked for any "emails sent to or received by Justice Kavanaugh, including emails on which he was a carbon copy or blind carbon copy recipient, during the period in which Justice Kavanaugh served as staff secretary, including any documents attached to such emails."

Additionally, the Democrat requested "the textual records contained in Justice Kavanaugh’s office files from the period during which he served as staff secretary."

Any successful effort to remove Kavanaugh from the bench would require a two-thirds vote of both the House of Representatives and the Senate.

Several 2020 Democratic presidential contenders -- including Elizabeth Warren, Kamala Harris, Kirsten Gillibrand, and Pete Buttigieg -- have said they would be open to legislation that would expand the size of the Supreme Court, to effectively dilute the importance of conservative justices' votes. The size of federal appeals courts, including the Supreme Court, is set by Congress.

"When are we going to move on from the smear campaigns, and begin working on real, bipartisan solutions to improve the lives of the Americans we were elected to represent?” Collins asked.