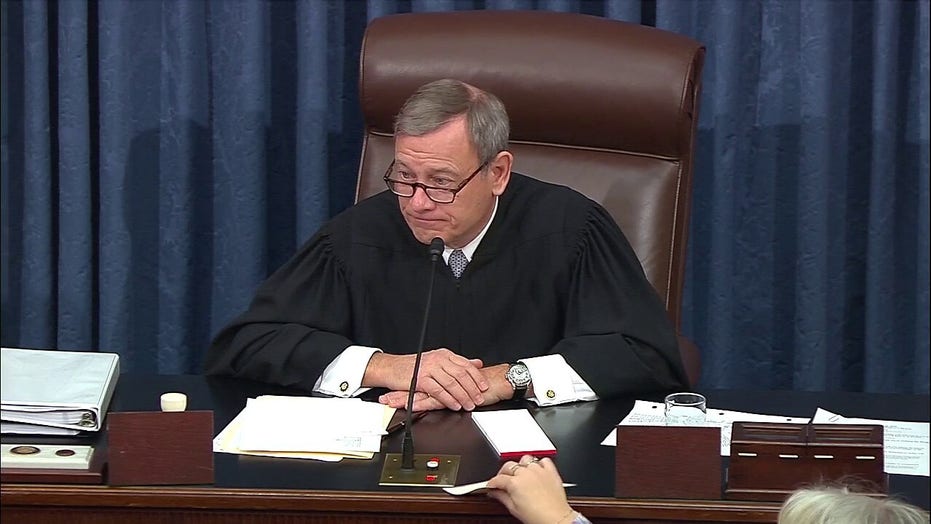 Chief Justice John Roberts seemed visibly irritated when Sen. Elizabeth Warren, D-Mass., formally asked a question during President Trump's impeachment trial Thursday that referenced him and questioned the legitimacy of the Supreme Court and Constitution in relation to the proceedings.

In accordance with Senate rules, the chief justice of the United States must read aloud the questions posed by senators to the impeachment managers and the president's counsel. Roberts formally recognized Warren, a Democratic presidential candidate, who then submitted her written question to a clerk.

Roberts read her question from the card -- which referenced him.

"At a time when large majorities of Americans have lost faith in government, does the fact that the chief justice is presiding over an impeachment trial in which Republican senators have thus far refused to allow witnesses or evidence contribute to the loss of legitimacy of the chief justice, the Supreme Court, and the Constitution?" Roberts read from the card handed to him by the clerk. 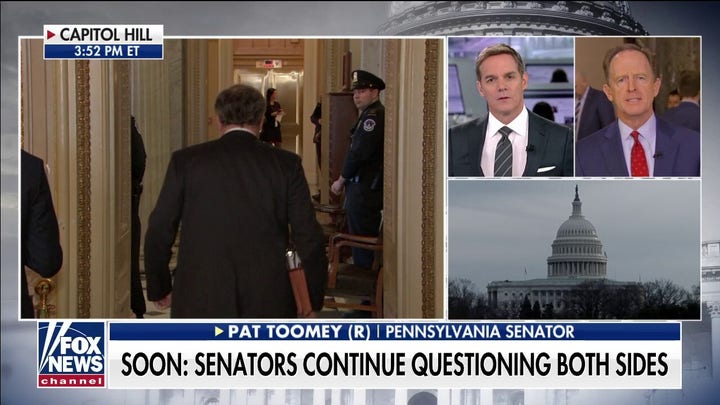 When he finished reading the question -- explicitly posed to the House Impeachment managers -- Roberts pursed his lips and shot a chagrined look.

After a moment, Rep. Adam Schiff, D-Calif., the lead impeachment manager, appeared at the dais to answer the question -- standing mere feet in front of Roberts.

Schiff appeared to try to distance himself from Warren's question, offering a short answer to the question before speaking at length about a tangential exchange.

"I would not say that it leads to a loss of confidence in the chief justice," Schiff said, adding that Roberts has thus far "presided admirably."

He then quickly pivoted to a criticism of President Trump and a conversation he had about the impeachment trial with Rep. Tom Malinowski, D-N.J.

Schiff said Ambassador Kurt Volker had spoken in September 2019 with Ukrainian diplomat Andriy Yermak, and during the conversation he told him that Ukrainian President Volodymyr Zelensky should not do a "political investigation" of his predecessor, Petro Poroshenko.

Yermak replied, Schiff said, that Volker's remark was ironic because of "the investigation [the U.S.] wants to do with the Clintons and the Bidens."

"What is our answer to that," Schiff recalled asking Malinowski.

"This [impeachment] proceeding is our answer," the freshman New Jersey lawmaker responded.

Schiff claimed the exchange with Malinowski proved that a "trial without witnesses" doesn't reflect badly on Roberts -- but instead on Congress.

Because of the trial, Warren is in Washington, instead of campaigning in states like Iowa, which is holding caucuses on Monday. Warren is seeking the votes of progressives.