Former Special Counsel Robert Mueller faced a barrage of criticism Wednesday from House Republicans for his handling of the collusion and obstruction investigations into President Trump, as his fiery congressional hearing gave the probe's detractors a rare chance to confront him.

At the same time, the highly anticipated testimony offered little in the way of new revelations. Far from an operatic rendition of the Mueller report that Democrats hoped would paint a clear picture of pernicious misconduct by the president, the testimony resembled more a spoken-word album -- halting, at times awkward, with scant dramatic flair.

The result of hours of grueling hearings before two House committees -- like the report itself -- was ambiguous. Mueller at times appeared flustered, often asking lawmakers to repeat questions, while referring back to the report or stating topics were outside his purview whenever questioners sought to drag him outside the bounds of his written findings.

Mueller notably declared Wednesday that, despite Trump's assertions to the contrary, the report does not exonerate the president of obstruction of justice. Defending his probe, Mueller told House Intelligence Committee Chairman Adam Schiff, D-Calif., “It is not a witch hunt." 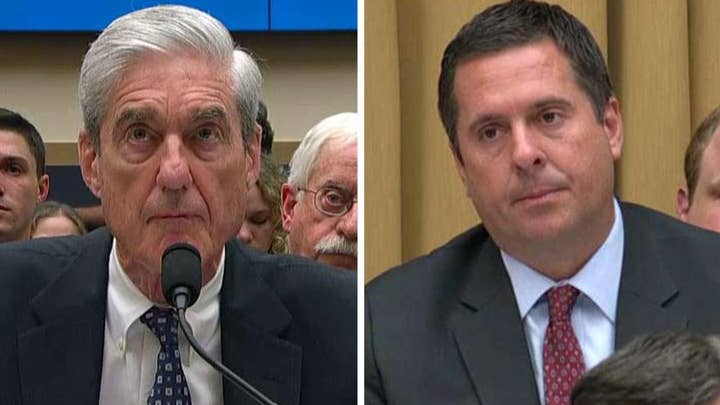 Still, Mueller stood by his findings that there was no evidence of a criminal conspiracy between the Trump campaign and the Russians during the 2016 election. Schiff, in the second hearing of the day, charged that Mueller’s report found that the Trump campaign “welcomed” Russia’s interference in the election. Intelligence Committee ranking member Devin Nunes, R-Calif., followed by quipping, "Welcome everyone to the last gasp of the Russian collusion conspiracy theory."

Much of the hearing, though, provided a forum for Republicans to fume at Mueller over the way he conducted the other part of his probe, on the obstruction component.

Republicans argued prosecutors should only bring charges in such a case -- and would have no business saying whether someone is innocent, in questioning the section of his report stating that while the probe did not establish Trump committed a crime, it also did not exonerate him.

“Can you give an example other than Donald Trump where the Justice Department determined an investigated person was not exonerated because their innocence was not conclusively determined?” Texas Republican Rep. John Ratcliffe asked Mueller.

“I cannot, but this is a unique situation," Mueller replied.

Another member of the House Judiciary Committee, Texas Rep. Louie Gohmert, told Mueller he “perpetuated injustice” for spending two years investigating the president. "What he's doing is not obstructing justice; he is pursuing justice," he said.

Ohio Rep. Steve Chabot called the report a “one-sided attack” on the president, as he demanded answers about the origins of the Russia probe, claiming anti-Trump bias at the time among top officials of the Justice Department.

Schiff says Mueller hearing will dig into disloyalty, greed and lies of 2016 election

Democrats -- amid a push from liberals to impeach Trump – have argued the report proves the president worked to hinder the probe. Under questioning House Judiciary Committee Chairman Jerry Nadler, D-N.Y., Mueller flatly replied “no” when asked if his report totally exonerates the president, as Trump has argued.

MUELLER SAYS HE IS 'NOT FAMILIAR' WITH FUSION GPS, THE FIRM BEHIND THE STEELE DOSSIER

"The president was not exculpated," Mueller said, also adding that Trump refused to sit for an interview with his investigators.

“Although Department policy barred you from indicting the president for this conduct, you made clear that he is not exonerated,” Nadler told Mueller. “Any other person who acted this way would have been charged with a crime. And in this nation, not even the president is above the law.”

In an attempt to prove obstruction, Florida Democratic Rep. Val Demings asked Mueller about the president's responses to questions from his team, asking, “Isn’t it fair to say the president’s written answers were not only inadequate and incomplete because he didn’t answer many of your questions, but where he did, his answers showed that he wasn’t always being truthful?”

Mueller replied: “I would say generally.”

Republicans pushed back on the obstruction accusation, repeatedly arguing Trump was not guilty of the underlying offense of coordination with Russia during the 2016 election. House Judiciary Committee ranking member Rep. Doug Collins, R-Ga., asked Mueller if his probe was “curtailed or stopped or hindered” at any point. Mueller replied, “no.”

Mueller said at the outset of the hearing he wouldn’t discuss the origins of the FBI's investigation into the president, saying he won’t be “able to answer questions about certain areas that I know are of public interest.” Pressed by Republicans about the anti-Trump dossier paid for by Democrats, authored by ex-British spy Christopher Steele and commissioned by firm Fusion GPS, Mueller repeatedly refused to discuss the issue, saying, “This is outside my purview.”

The dossier of claims about Trump's relationship with Russia was provided to the Justice Department at the early stages of the investigation. Republicans have demanded answers about the origins of the Russia probe, claiming anti-Trump bias at the time among top officials of the Justice Department.

Rep. Jim Jordan to Mueller: Maybe a better course of action is to figure out how the false accusations started

He also repeatedly declined to answer questions about Joseph Mifsud, the mysterious Maltese professor believed to have played a key role in igniting the Russia probe. Investigators say he was the one who told then-Trump campaign aide George Papadopoulos in April 2016 that the Russians had “dirt” that could damage Hillary Clinton’s 2016 presidential campaign. Mueller's report said Mifsud told the FBI inaccurate information. “I can’t get into it,” Mueller said.

Mueller acknowledged, under questioning from Republicans, being friends with former FBI director James Comey. He also addressed anti-Trump texts sent by then-FBI agent Peter Strzok, saying he moved to "swiftly" reassign Strzok from the probe when he learned of them. He fired back at a Republican lawmaker who questioned the Democratic ties to some on his team, saying, "I've been in this business for almost 25 years, and in those 25 years, I have not had occasion once to ask somebody about their political affiliation. It is not done."

“The investigation did not establish that members of the Trump campaign conspired with the Russian government in its election interference activities,” Mueller said. “We did not address ‘collusion,’ which is not a legal term. Rather, we focused on whether the evidence was sufficient to charge any member of the campaign with taking part in a criminal conspiracy. It was not.”

“We found insufficient evidence of the president’s culpability,” Mueller added.

Mueller started his day with testimony before the House Judiciary Committee, before heading for more questioning in front of the House Intelligence Committee, where Democrats had high hopes for the hearings. On Capitol Hill, the hearing on Wednesday drew a large crowd of spectators, including anti-Trump activists.

But in between hearings, White House press secretary Stephanie Grisham tweeted: "The last three hours have been an epic embarrassment for the Democrats. Expect more of the same in the second half."

The president has repeatedly decried Mueller’s probe as a “witch hunt,” emphatically denying he or his campaign colluded with Russia to undermine Democrat Hillary Clinton’s chances in the 2016 race, or that he worked to obstruct the investigation. In the hours before the hearing, the president fired off a spate of tweets accusing Mueller of being conflicted and protesting his request for Aaron Zebley, his top aide on the probe, to join him at the witness table Wednesday.

“So Robert Mueller has now asked for his long time Never Trumper lawyer to sit beside him and help with answers,” Trump tweeted. “What’s this all about? His lawyer represented the “basement server guy” who got off free in the Crooked Hillary case. This should NOT be allowed. Rigged Witch Hunt!”

Nunes, at the beginning of the Intelligence Committee hearing, also protested Zebley’s appearance, saying Republican members wouldn’t ask him questions. Schiff countered that it was fine for Zebley to appear, saying Trump – the "angry man down the street" – must not have wanted him there.

Earlier this week, the Justice Department sent Mueller a letter telling him to keep his upcoming testimony to House lawmakers "within the boundaries" of the public version of his report. The letter provoked criticism from Democrats ahead of Wednesday’s hearing, with Nadler calling it “incredibly arrogant.” But Attorney General Bill Barr told Fox News on Tuesday that it was former Mueller’s team who asked for guidance ahead of the hearing.

Mueller submitted his report to the Justice Department in March; a redacted version was later released to the public in April.

Mueller has only spoken in public once about his investigation: in May, Mueller made clear his disinterest in testifying before lawmakers, saying, “Any testimony from this office would not go beyond our report."

Mueller’s investigation, which was initially ordered to look into the 2016 election in May of 2017, took place over nearly two years. It expanded to probe financial crimes of Trump associates before the election, conversations Trump’s national security adviser had with the Russians during the transition and whether Trump obstructed justice with his comments and actions related to the probe.

Mueller, the former director of the FBI under Presidents George W. Bush and Barack Obama, was appointed special counsel by Deputy Attorney General Rod Rosenstein in May of 2017. Mueller’s team indicted, convicted, or won guilty pleas from 34 people and three companies as part of an investigation that has also probed issues unrelated to the 2016 campaign.