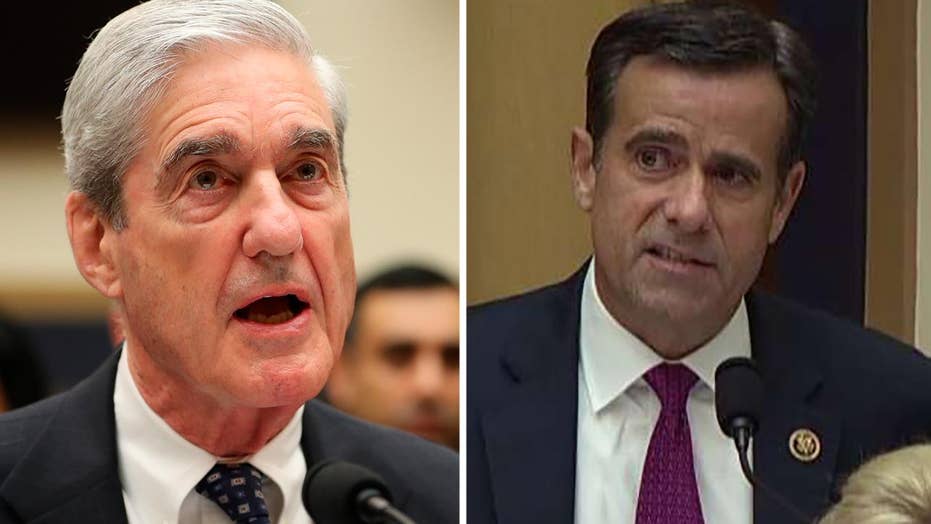 Republican slams volume 2 of Mueller report at hearing: This was not authorized under the law to be written

Rep. John Ratcliffe tells Robert Mueller that according to special counsel regulations, reports should be written on decisions reached, yet volume 2 of his report on potential obstruction of justice violations reached no conclusion.

Ratcliffe, R-Texas, asked Mueller during congressional testimony to identify which Justice Department policy “set forth a legal standard that an investigated person is not exonerated if their innocence from criminal conduct is not conclusively determined.” The lawmaker was raising concern about Mueller's report saying that while the probe did not establish Trump committed a crime, it also did not exonerate him.

“Can you give an example other than Donald Trump where the Justice Department determined an investigated person was not exonerated because their innocence was not conclusively determined?” Ratcliffe continued.

Mueller replied: “I cannot but this is a unique situation."

Ratcliffe continued to tear into Mueller, stating: “Okay, well you can't--time is short, I got five minutes, let's leave it at you can't find it because--I'll tell you why, it doesn't exist."

He contended that the obstruction section of the report “was not authorized under the law to be written—it was written under a legal standard that does not exist at the Justice Department.”

“I agree with Chairman Nadler this morning when he said Donald Trump is not above the law,” Ratcliffe said. “But he damn sure should not be below the law which is where Volume II of this report puts him.”

Ratcliffe’s moment at Mueller’s highly anticipated hearing before the House Judiciary Committee Wednesday focused solely on Mueller’s decision “not to make a determination on whether the President committed a crime.” But he has also said Trump was not exonerated, repeating that at Wednesday's hearing.

Prior to his public testimony Wednesday, Mueller only spoke publicly about his work once—during a press conference from the Justice Department in May.

Mueller explained, at the time, the longstanding Justice Department policy, which states that a sitting president cannot be charged with a crime, noting that “charging the president with a crime was not an option we could consider.”

“We concluded that we would not reach a determination one way or the other about whether the president committed a crime,” Mueller said at the time. “That is the office’s final position.”

On Wednesday, committee Chairman Jerrold Nadler, D-N.Y., asked Mueller whether his report “exonerated” the president, to which Mueller said: “No.”

Republicans have fumed over the former special counsel’s decision to leave open the issue of alleged obstruction of justice by the president. In May, Attorney General Bill Barr even broke with Mueller, stating that he “personally felt he could’ve reached a decision.”

“The opinion says you cannot indict a president while he is in office,” Barr said, referring to the Justice Department policy laid out by its Office of Legal Counsel. “But he could’ve reached a decision whether it was criminal activity, but he had his reasons for not doing it, which he explained.”