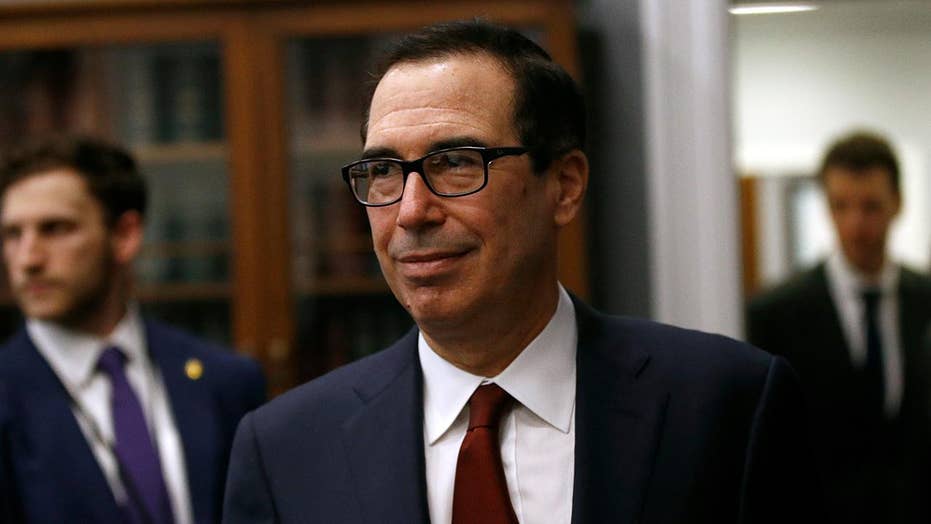 Treasury Secretary Steven Mnuchin said Wednesday that the department hasn't decided if it'll comply with a demand by a key House Democrat to deliver President Trump's tax returns, and won't meet a Wednesday deadline to do so.

The news came a day after Mnuchin faced off in a contentious exchange on the issue with the chairwoman of the House Financial Services Committee, California Rep. Maxine Waters. Mnuchin, who testified for more than three hours, said he would rethink whether to reappear before the committee, based on Waters' behavior.

In a letter to House Ways and Means Committee Chairman Richard Neal, D-Mass., who asked for Trump's returns a week ago, Mnuchin said Treasury would consult with the Justice Department and further review the request.

WATCH: MNUCHIN SPARS WITH MAXINE WATERS, TELLS HER TO 'BANG THE GAVEL' AS SHE GOES WIDE-EYED IN SHOCK

"The legal implications of this request could affect protections for all Americans against politically-motivated disclosures of personal tax information, regardless of which party is in power," Mnuchin wrote.

He said Treasury respects lawmakers' oversight duties, and would make sure taxpayer protections were "scrupulously observed, consistent with my statutory responsibilities."

Earlier Wednesday, Trump, who has broken with decades of presidential tradition by not releasing his returns, told reporters he wouldn't do so while he's under IRS audit. He said much the same thing last week.

"I would love to give them, but I'm not going to do it while I'm under audit."

The IRS says there's no rule against subjects of an audit releasing their tax filings.

The brouhaha comes as several other Democrat presidential contenders have vowed to release their returns or have already done so. Sen. Elizabeth Warren of Massachusetts released her 2018 tax returns on Wednesday, showing she and her husband earned nearly $1 million last year.

And Sen. Bernie Sanders, I-Vt., announced Tuesday that he'll release 10 years of tax returns on Monday -- filings expected to show that the self-declared Democratic socialist made millions from book sales.

Trump's position has long been that he is under audit and therefore unable to divulge his returns. But in recent weeks, he has added to the argument, saying publicly and privately that the American people elected him without seeing his taxes and would do so again.

The president has told those close to him that the attempt to get his returns represented an assault on his privacy and a further example of the Democratic-led "witch hunt."

Trump has repeatedly asked aides about the status of the House request and has inquired about the "loyalty" of the top officials at the IRS, according to one outside adviser who spoke on condition of anonymity to discuss private conversations.

Democrats didn't expect the department to comply, but they haven't sketched out their next steps. Rep. Dan Kildee, D-Mich., speaking before Mnuchin's response was delivered, said it may take Neal a couple of days to issue his own response.

House Democrats are at a party retreat in the Virginia suburbs of Washington.

Neal has adopted a methodical approach to seeking Trump's returns. He has the option of eventually seeking to subpoena the records or go to court to get them, but it's not clear if he's prepared to ratchet up the confrontation.

Neal's initial letter didn't lay out any consequences for the IRS if it didn't comply, and a spokesman said a likely course would be a second, more insistent, letter.

"We intend to follow through with this," Neal said Wednesday. "I'll let you know fast."

The request for Trump's tax filings is but one of many oversight efforts launched by Democrats after taking back the House in last fall's midterms. Neal is relying on a 1920s-era law that says the IRS "shall furnish" any tax return requested by the chairmen of key House and Senate committees.

Mnuchin told lawmakers that his department will "follow the law," but he hasn't shared the department's interpretation of the statute.

The White House did not respond to questions as to whether the president asked Mnuchin or the IRS head to intervene.

The president's outside attorney also did not respond to a request for comment.