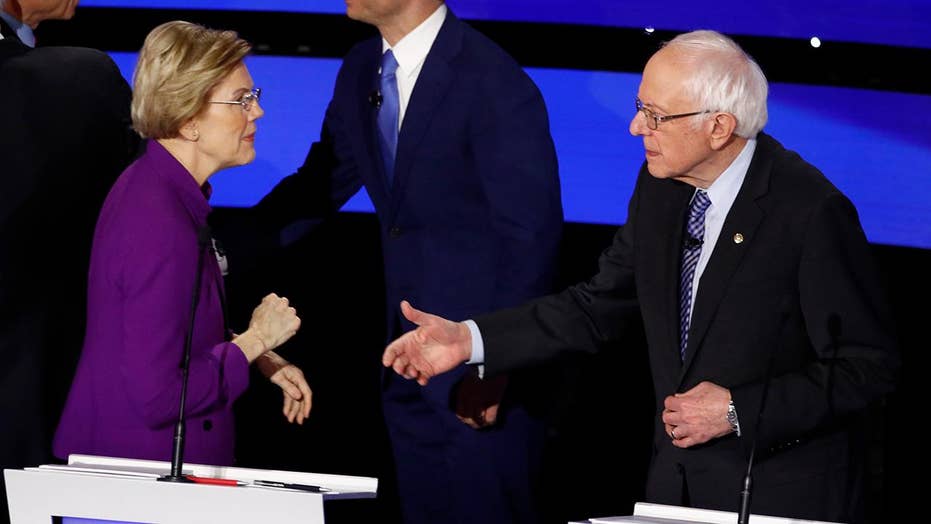 Tense Sanders-Warren exchange caught on hot mic: I think you called me a liar on national TV

Audio of the tense post-debate exchange between Sen. Elizabeth Warren and Sen. Bernie Sanders revealing both of them accusing the other of ‘lying’ on national television; Fox News correspondent Peter Doocy reports.

It’s been nearly a week since the primetime dust-up between progressive standard-bearers and 2020 Democratic presidential nomination rivals Sens. Bernie Sanders of Vermont and Elizabeth Warren of Massachusetts over sexism in politics and whether or not he told her a woman couldn’t win the presidency.

The two candidates shook hands and briefly conversed at a Martin Luther King Jr. prayer service in Columbia, S.C., on Monday morning. Later, the two marched arm-in-arm along with many of their top rivals for the nomination

Both White House contenders have been trying to move on from the showdown, and Sanders, in particular, has turned up the volume in recent days on his pitch for women voters in the state that holds the first primary in the race for the White House.

But those efforts haven’t been met with total success.

The independent populist lawmaker who’s making his second straight bid for the White House made headlines once again on Sunday for saying 'yes' when asked if gender remains an obstacle for female politicians.

In an interview with New Hampshire Public Radio, Sanders broadened the context, saying that "everybody has their own sets of problems. I’m 78 years of age. That’s a problem. There are a lot of people say, well, you know, I like Bernie's nice guy, but he's 78 years of age. And so we have to argue, please look at the totality of who I am.”

His comments capped a weekend where Sanders repeatedly emphasized his commitment to fighting for women’s rights. In front of more than 1,000 people at a town hall in Exeter, he pledged “that I will never nominate any individual to the Supreme Court or any other federal courts who is not 100 percent pro-Roe v. Wade.”

And his campaign went up with a new statewide TV commercial in which the senator highlights his commitment to women’s rights, warning that under Republican President Trump, “women’s rights are under attack.”

Sanders kicked off his trip by emphasizing that “we are in this together” as he spoke to the crowd on Saturday ahead of the Portsmouth Women’s March.

Sanders didn’t take part in the actual march in Portsmouth, as he moved on to his next event.

Sanders’ appearance at the rally in Portsmouth appeared to be a late addition to his schedule. Reporters weren’t notified until Friday night. The campaign said that the organizers of the event had invited the senator -- but not everybody appeared happy with his appearance.

Portsmouth Democrats Chair Laurie McCray told Fox News that “the Women’s Marches, in my opinion, should be for, by and about women and the issues that are important to them. They should not be used as platforms for political candidates.”

A Democratic activist who attended the march – who asked for anonymity – also said she felt uncomfortable with the appearance of a presidential candidate at the event – noting it “dampened the spirit” of the march.

Sanders’ spotlighting of women’s rights came less than a week after his clash with Warren at the debate over a disputed CNN report that Sanders had privately told Warren in a December 2018 meeting that a woman could not realistically become president in 2020. The meeting took place as both lawmakers were each gearing up to launch White House bids.

“Well, as a matter of fact, I didn’t say it," Sanders insisted at the debate, as he unequivocally denied that the conversation took place. 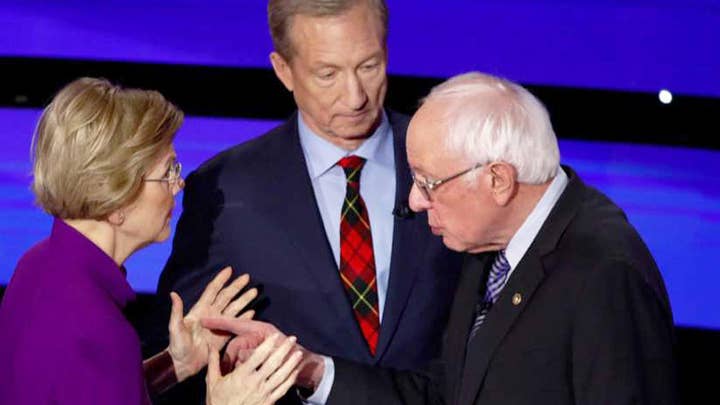 But at the end of the debate, Warren refused to shake Sanders’ hand as the two senators had a brief, heated conversation in which both candidates accused the other of calling them a liar on national television. Since the salvos on the debate stage, both candidates have refused to discuss the showdown, and Sanders didn’t bring it up at his Portsmouth or Exeter stops.

“Bernie is responsible for what he says and how his campaign behaves. All candidates are. Period,” emphasized  Democratic strategist Michael Ceraso – a veteran of Sanders’ 2016 presidential campaign who worked as Pete Buttigieg’s New Hampshire state director before parting ways last summer with the campaign.

“For him to imply being a woman is a negative is misogynistic and out of touch, especially when he got beat by Sec. Clinton in 2016, who also went on to earn more votes than the current president. Bernie’s campaign was mired in staff controversy in 2016, especially among women staffers who felt they were treated unfairly and inequitably compared to their male counterparts. Bernie’s comments reinforce the perception that he has not evolved on women issues,” Ceraso argued.

Both Sanders and Warren have refused to discuss the showdown since the debate and Sanders argued that the media has over-emphasized the incident. And supporters of both candidates who attended the town hall in Exeter – didn’t seem fazed by the scrap up between the two presidential candidates and longtime friends.

Dabra Seiken of Portsmouth – who remains undecided between Sanders and Warren with three weeks to go until primary day – said: “what bothers me is the rigmarole everybody’s making about it.”

“If Bernie said that, that doesn’t even bother me because I’ve said that,” Seiken added. “If he said it, I don’t care.”

And she lamented “I love them both and I don’t know how I’m going to decide.”

Jen Hart of Newburyport, Mass., stressed that “I don’t even want to talk about it. I think it’s a distraction… it’s not the most important thing.”

Sean Crowley of Fremont, N.H. – who identified himself as a longtime Sanders supporter – said the clash was “a waste of time and energy.”

And, he argued, “it’s the mainstream media trying to stir things up.”