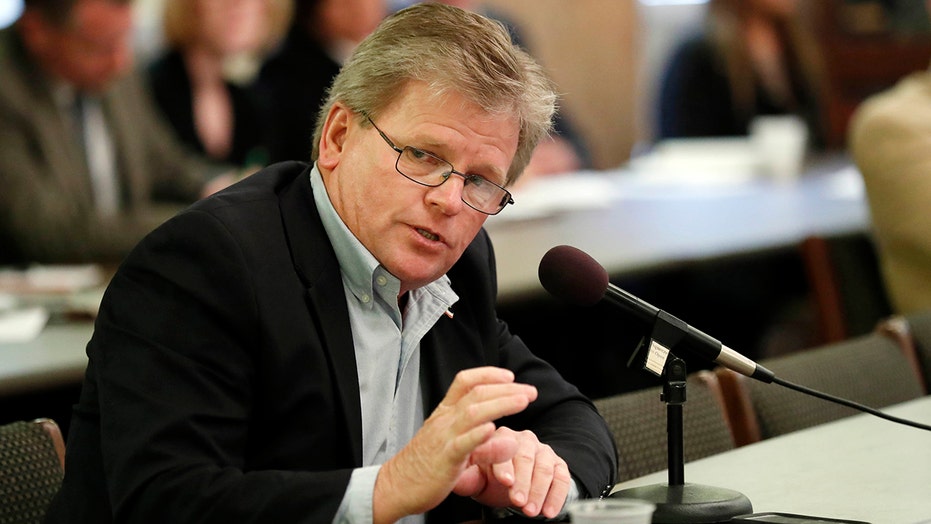 A Mississippi state rep was arrested Saturday after he allegedly punched his wife in the face when she didn't undress quickly enough when he wanted to have sex, according to a report.

Republican Rep. Douglas McLeod, of Lucedale was taken into custody after the alleged incident, which took place at his home around 9 p.m., the Sun Herald reported, citing a police report.

PENNSYLVANIA STATE REPRESENTATIVE RESIGNS AFTER BEING ACCUSED OF SEXUAL ASSAULT

When George County sheriff's deputies responded to the home for a report of domestic assault, the report said McLeod opened the door with a glass of alcohol in his hand and said, "Are you kidding me?"

Mississippi Rep. Doug McLeod, R-Lucedale, allegedly punched his wife in the face when she took too long to undress when he wanted to have sex, according to a police report.<br data-cke-eol="1"> (AP Photo/Rogelio V. Solis, File)

The 58-year-old went back inside, yelling that "the cops are here," before going back to the front door, the report said. Investigators said he "had slurred speech and walked slow in a zigzag pattern," and at one point had to grab a handrail to balance himself.

According to the report, deputies saw two women at the top of the stairs, both looking frightened. McLeod's wife eventually went outside after deputies assured her they would keep her away from her husband.

The lawmaker's wife reportedly said McLeod was drunk and "just snapped" — something she claimed he often does when intoxicated.

McLeod had allegedly punched his wife and bloodied her nose. Blood was found on the McLeods' bed and floor, according to the report.

His wife ran to a woman in another room, where they locked themselves inside. The unidentified other woman alleged McLeod began to bang on the door, telling the women to open it. He allegedly said that if the other woman didn't open the door, he'd "kill her (expletive) dog."

Republican House Speaker Philip Gunn said Tuesday that if the allegations are true, McLeod should resign from office.

"I have attempted to contact Rep. McLeod to request his resignation, if in fact, these allegations are true," Gunn said in a statement. "These actions are unacceptable for anyone."

McLeod, who has represented George and Stone counties since 2012, did not immediately return Fox News' request for comment.

He is unopposed for reelection this year.