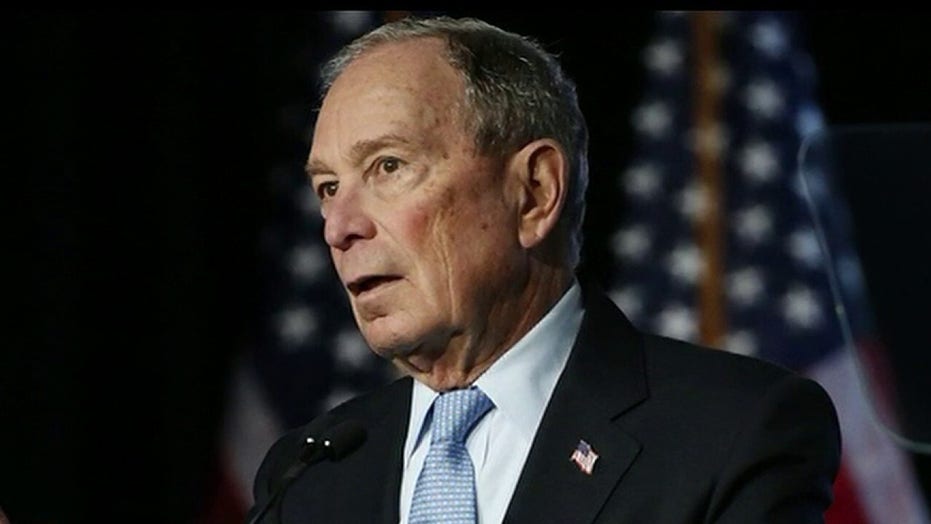 Former New York City Mayor Mike Bloomberg suspended his presidential campaign Wednesday after spending record amounts from his own fortune on an ad-blitz strategy that failed to yield any wins on Super Tuesday beyond a single victory in the American Samoa caucuses.

He immediately announced he would be endorsing Joe Biden, following in the footsteps of other moderate-leaning Democratic presidential candidates who have consolidated support behind the former vice president in his primary brawl against Vermont Sen. Bernie Sanders.

"I’m a believer in using data to inform decisions. After yesterday’s results, the delegate math has become virtually impossible – and a viable path to the nomination no longer exists. But I remain clear-eyed about my overriding objective: victory in November," Bloomberg said in his statement.

Bloomberg finished well behind on Super Tuesday, despite spending more than a half-billion of his own fortune on his 2020 bid -- centered on a strategy of skipping the early-primary stories in favor of Super Tuesday. To put his investment in perspective, he spent close to the GDP of American Samoa in order to win that contest -- and only that contest.

In backing the former vice president, Bloomberg emphasized: “I’ve known Joe for a very long time. I know his decency, his honesty, and his commitment to the issues that are so important to our country – including gun safety, health care, climate change, and good jobs."

President Trump, who has been relentless in mocking Bloomberg over everything from his height to his debate performances, delivered his barbed observations on the race once more after Bloomberg dropped out.

"Mini Mike Bloomberg just 'quit' the race for President. I could have told him long ago that he didn’t have what it takes, and he would have saved himself a billion dollars, the real cost. Now he will pour money into Sleepy Joe’s campaign, hoping to save face. It won’t work!" he tweeted.

But regardless of whether he won the nomination or fell short, Bloomberg's vowed to spend freely to try and defeat Trump in November's general election.

Bloomberg flirted with a White House run in late 2018 and early 2019, but decided in March of last year to forgo a bid, as Biden was ramping up a campaign and Bloomberg didn't want to split the moderate vote.

He later reversed course as Biden struggled in the fall, but took the exceedingly risky path of skipping Iowa, New Hampshire, Nevada and South Carolina, placing his bets on posting big numbers in the 14 Super Tuesday states. He blanketed the airwaves with ads from coast-to-coast, hired an army of consultants and campaign aides and positioned them across the country, and had been gaining traction in national polls, only to lose steam after rocky debate performances.

Bloomberg's White House bid was also crippled by the resurgence of Biden -- who after extremely disappointing finishes in Iowa and New Hampshire, rebounded a bit in Nevada and then crushed the competition in this past weekend's South Carolina primary. That landslide victor propelled the former vice president to sweeping victories on Super Tuesday.

Minutes after Bloomberg's announcement, Biden took to Twitter to praise his rival, who's also spent millions of his own money the past decade to try and curb gun violence and battle the effects of climate change.

"I can’t thank you enough for your support—and for your tireless work on everything from gun safety reform to climate change. This race is bigger than candidates and bigger than politics. It’s about defeating Donald Trump, and with your help, we’re gonna do it," Biden wrote."

Bloomberg's announcement came 24 hours after he declared he had “no intention of dropping out."

But speaking with reporters in Florida Tuesday morning, the centrist candidate acknowledged that the possibility of a contested Democratic nominating convention in July in Milwaukee was his only pathway to becoming the party’s standard-bearer, saying, “I don't think I can win any other way.”

From late November, when he declared his candidacy, through early last month, Bloomberg ran a scripted campaign that relied on daily campaign stops and a tidal wave of unprecedented ad spending.

But as the nominating calendar kicked off, he came under increasing attack from his Democratic nomination rivals, who accused him of trying to buy the election. And he was slammed during his two debate performances by rival Sen. Elizabeth Warren of Massachusets over an alleged culture of sexual harassment directed at women at his media company. His past support of stop-and-frisk policies in New York haunted his presidential campaign, even as he expressed regret for them.