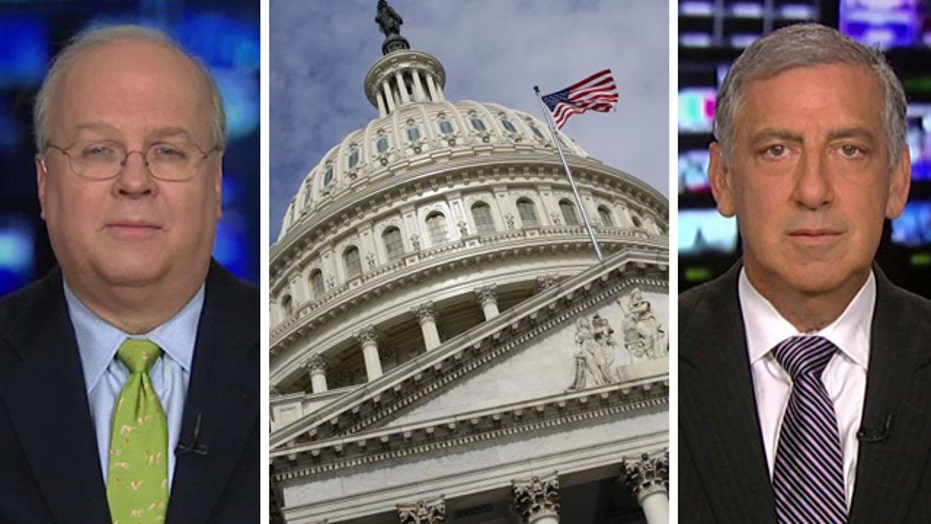 Can Republicans take the Senate?

The conventional wisdom -- that Democrats will probably lose the Senate this fall -- is now hardening into cement.

Even Democratic pundits are falling into line.

We all know that politics is a never-ending spin cycle in which commentators cast their own side in the most favorable light. That helps explain why some conservatives insisted up to Election Day that Mitt Romney was going to send Barack Obama packing.

It's still early for definitive pronouncements about whether Republicans will pick up the six seats they need to make Mitch McConnell majority leader. However nationalized the election, these are a series of local races.

But when Chris Matthews, a former Tip O'Neill aide, is talking down his party's chances, it's a recognition of reality. "It's going to be very hard to hold the Senate--I think the Senate goes," he said on MSNBC.

Give him points for honesty: Matthews isn't glossing over the bad news for the Dems, He added that Republicans have "passion" and Democrats are "not sure of themselves."

Another MSNBC commentator, who famously worked for the president, is similarly downbeat. As Mediaite noted, Robert Gibbs served up his pessimism with one caveat involving his former boss.

When Gibbs jumped from the White House to MSNBC, he told me he wouldn't just be an administration mouthpiece. And with those comments, he proved it (though he is, understandably, consistently pro-Obama).

Maybe some liberal commentators will shift to cheerleading mode when the midterms enter their stretch run. But for now, some of MSNBC's top voices are engaged in reality-based programming. Or maybe they're just depressed.

Some liberal columnists are reacting by giving their team advice. The Washington Post’s Eugene Robinson says the Democrats should talk up ObamaCare, but also “give their voters a compelling reason to go to the polls — and that means explaining, in the most urgent terms, just what is at stake.

“Today’s Republican Party is not ‘conservative’ by any reasonable definition of the word. It is a radical party seeking to dramatically alter the social compact by which we have lived for decades.”

Best defense is a good offense, and all that.

To be sure, many factors could change by November. Whether such Democrats as Mary Landrieu and Mark Begich can hang on involves local dynamics as well as national issues. But the president's unpopularity, the rocky rollout of ObamaCare and the anemic economy spell big trouble for the party holding the presidency -- which almost never does well in the sixth year of an administration.

Back in 2010, when he was  presidential press secretary, Gibbs said on the air that the Democrats could lose the House. He was right, of course, and merely stating the obvious, but Hill Democrats went haywire.

“I still have tire tracks from Nancy Pelosi,” Gibbs told David Gregory. “Honesty can only go so far in Washington when you’re employed.”

Public Editor Margaret Sullivan has launched “AnonyWatch,” an effort to spotlight her paper’s promiscuous use of unnamed sources.

“‘De Blasio went into this thinking that he and Cuomo were friends,’ a Democratic insider said, speaking on the condition of anonymity because of concern over retribution, ‘but Andrew Cuomo doesn’t really have friends.’

“Whoa! How does that square with The Times’s clear written rule not to smear people anonymously? (“Anonymity should not be used as a cloak for personal attacks.”) And what exactly is a Democratic insider, I wonder. A Cuomo insider? A De Blasio insider? A guy inside Democratic headquarters after hours with a mop?”

Good for Sullivan. May I refer her to yesterday’s piece on CNN’s ratings boost over coverage of the missing-plane story?

“‘It is a tremendous story that is completely in our wheelhouse,’ said a senior CNN executive, who asked not to be identified defining the network’s strategy for its coverage…

“‘It’s an incredible mystery full of human drama, with an international element,’ the senior CNN executive said. ‘Anything international plays into our hands because we have more reporters to deploy all over the world.’”

No one from CNN would praise the network on the record? It had to be some super-secret background deal?

This is not to detract from CNN’s success on the Malaysia story (though I’ve criticized the excessive speculation, which the story mentions). But the idea of granting anonymity is so a person can criticize his own company or agency without fear of reprisal. Fulsome praise ought to be on the record.

The British phone-hacking trial has been dragging on for many weeks, but Tuesday was a rough day for the former editor of News of the World.

There was a bombshell accusation about Andy Coulson, who ran the Rupert Murdoch tabloid and went on to become a top aide to Prime Minister David Cameron.

A key witness said Coulson agreed to pay for the paper to hack the phones of aides to Prince William and Prince Harry. This, he said, involved paying a private eye 500 pounds a week to break into the voicemail of the royal staffers.

And this wasn’t just any witness. It was Clive Goodman, former royal editor of News of the World, who went to jail in 2007 for phone hacking.

The defense will undoubtedly raise questions about Goodman’s credibility. But Cameron is undoubtedly ruing the day he hired Coulson.