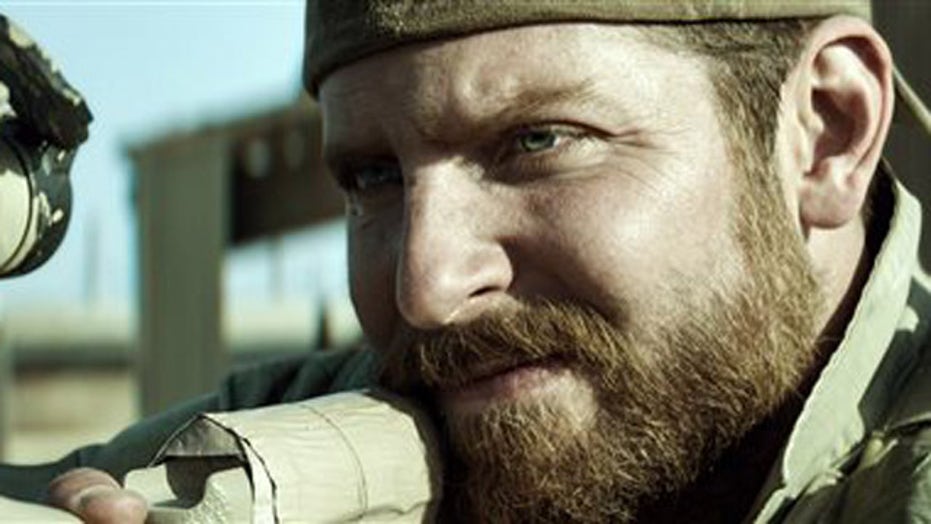 First lady Michelle Obama urged Hollywood to give a more accurate portrayal of veterans and defended the Oscar-nominated "American Sniper," which has received criticism for its depiction of war.

Bradley Cooper, who is nominated for best actor for his portrayal of the late Navy SEAL sniper Chris Kyle, joined Obama and media heavyweights in Washington, D.C., on Friday to launch "6 Certified" with representatives from Warner Bros., National Geographic Channels and the Producers Guild of America.

The initiative will allow TV shows and films to display an onscreen badge that tells viewers the show they're watching has been certified by the group Got Your 6, which derives its name from military slang for "I've got your back." To be approved, the film or show must cast a veteran, tell a veteran story, have a story written by a veteran or use veterans as resources.

"We hope our country will welcome back our veterans — not by setting them apart but by fully integrating them into the fabric of our communities," Mrs. Obama said.

Mrs. Obama also came to the defense of "American Sniper" — about Kyle, considered the most lethal sniper in U.S. military history. It has become a box-office sensation and has strong supporters but has also weathered a growing storm of criticism that the film glorifies murder and serves as war propaganda.

"While I know there have been critics, I felt that, more often than not, this film touches on many of the emotions and experiences that I've heard firsthand from military families over these past few years," she said.

Chris Marvin, managing director of Got Your 6 and a former U.S. Army officer and Blackhawk helicopter pilot, said their campaign isn't hoping to show veterans in a good light but in an honest one.

"Most Americans tell us that they only see veterans portrayed as broken or as heroes who walk on water in film and television," he said by phone. "We're missing something in the middle. Veterans are everyday people.

"They're your next door neighbor who helps you bring your garbage cans back when they blow away. They're your kids' fifth-grade math teacher. It's the person running for city council," he added. "You see them every day in your own life but you don't see them on film or television."

The Got Your 6 group was launched in 2012 to enlist Hollywood in the effort to discourage stereotypes and promote more accurate representation of the 2.6 million soldiers coming home over the past 10 years.

Surveys have found that many Americans presume veterans suffer from post-traumatic stress disorder, are homeless or are addicted to drugs or alcohol.

The group has taken lessons from other successful efforts to change national viewpoints, including increasing gay rights, reducing teen pregnancies, encouraging colonoscopies, improving animal rights and reducing drunken driving. It has identified Hollywood as an engine of cultural change.

"This is more of a challenge than anything else. We're challenging the entertainment industry — myself included — to live up to the responsibilities inherent in the powers we have and with the reach that we have," said Charlie Ebersol, a producer and creator of the "6 Certified" program.

Ebersol said films like 1987's "Full Metal Jacket" by Stanley Kubrick and Clint Eastwood's new "American Sniper" would likely be eligible for certification because they portray veterans accurately, even if the soldiers in those films aren't representative of the population of veterans.

Mrs. Obama cited TV shows including "Nashville" and "Doc McStuffins" as ones that share stories of "our veterans in new and meaningful ways." She said telling veterans' stories honestly makes for "tremendous TV and movies" and "are good for business as well."

Ebersol had his own list of shows with positive veteran portrayals, including the Jay Pritchett character in "Modern Family," Sam Waterston's portrayal of veteran Charlie Skinner on "The Newsroom" and Seth Rogen's guest role as a veteran on "The Mindy Project." In all them, being a veteran wasn't their defining characteristic.

"We have a real opportunity to go way beyond the platitudes of the entertainment industry. We love to say, 'I support the troops!' and 'I've got a yellow ribbon!' but there's an actual, tangible way to make a difference. That's what the challenge is here."