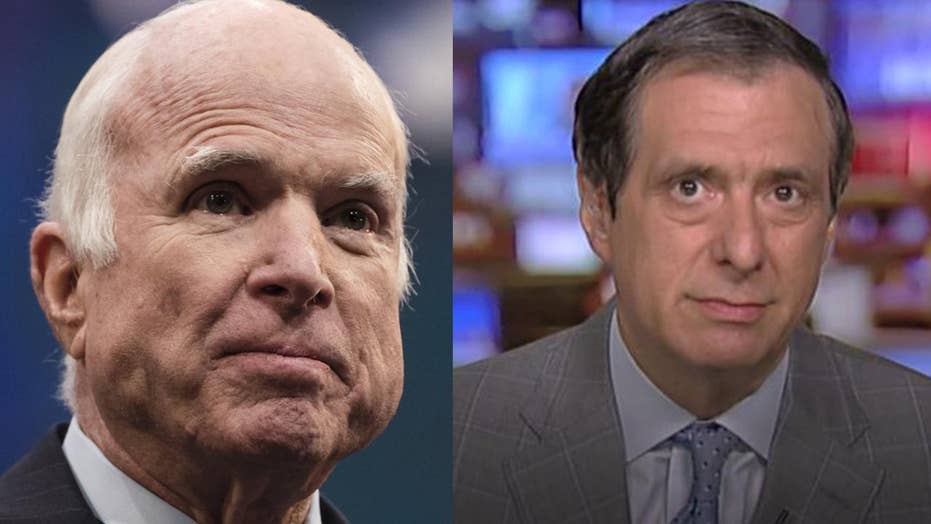 Kurtz: Why the McCain Sendoff Has Become a Litmus Test

Howard Kurtz weighs in on why Senator John McCain's sendoff has become a political litmus test.

No matter when John McCain left this earth, he would have been praised to the skies by the journalists who admired him enormously, even though they liked him far better when he was taking on his own party.

But because he died in the Trump era, there is in many of the media tributes an implicit or explicit contrast being drawn with the president who most of these same journalists decidedly do not admire.

And President Trump has fueled that story line by balking at saying anything positive about the 81-year-old senator after his death on Saturday—even, according to The Washington Post, nixing a plan by John Kelly, Sarah Huckabee Sanders and other staffers to have the White House put out a statement praising McCain as a hero.

And in final words read by his former campaign chief Rick Davis, McCain appeared to take a subtle shot by saying we shouldn't confuse patriotism with "tribal rivalries" and "weaken it when we hide behind walls, rather than tear them down."

Trump, after a fierce backlash, again lowered the White House flag to half-staff yesterday with a statement that "despite our differences on policy and politics, I respect Senator John McCain's service to our country."

I'll leave it to readers and viewers to decide which of these two tough-talking adversaries they prefer. But there is simply no question that in giving the onetime Vietnam POW a hero's sendoff, many journalists and commentators are delivering an implicit rebuke of Trump.

It's a case study in the disparity between the way the media treat politicians they like, personally and ideologically, and those they dislike. McCain, who once jokingly called the press "my base," provided enormous access and was the most frequent Sunday show guest ever. Trump says 80 percent of the media is fake news and frequently attacks journalists and their outlets, though he does provide more access than is commonly realized because he doesn't hold formal press conferences.

None of that should matter when it comes to coverage, but it does.

"John McCain's death offers a moment to think about the insurgency in the GOP that vexed him during his final decade as a politician, and that produced in Donald Trump a man he seemed to loathe, but couldn't figure out how to stop."

Ignatius, a "Morning Joe" fixture, goes on to say he believes McCain was among those who could never imagine that enough Americans "would actually vote for someone of such low moral character. McCain's refusal to temporize about Trump, as other Republicans have, was one of his finest moments."

So it becomes a litmus test: If, like McCain, you are a person of moral character, then you must stand up to Trump.

"I'm well aware that McCain could be maddeningly inconsistent and flawed. He equivocated about the Confederate flag in 2000. He too often acquiesced to Mitch McConnell's torching of Senate norms. For goodness sake, McCain decided Sarah Palin should be vice president. As he himself admitted, he should have done much more to fight Republican extremism."

And yet, the piece says, "the sum total of his career still represents a meaningful alternative to Trump, McConnell and the rest of today's Republican leadership."

And so, like so much else in today's society, everyone must be judged by where he or she stands on Trump or his policies. The acrimony between the two men makes that an easier story line, but it's not the only story line.

John McCain was shot down over Hanoi in 1967. He was first elected to Congress in 1982. He had an entire career, an entire life, before Trump took office last year.

To judge this wounded warrior through the lens of Trumpism is unfair, and suggests to me that too many in the media feel compelled to make everything about this president.