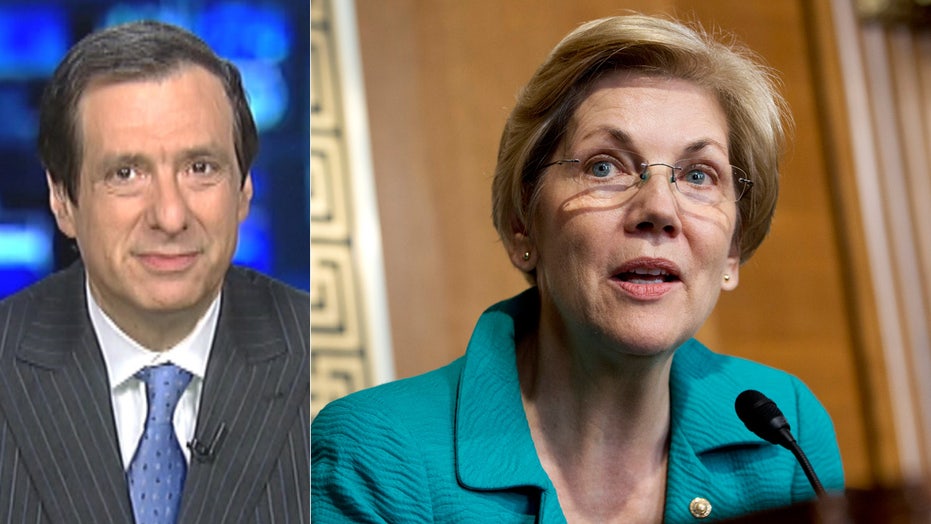 Kurtz: Elizabeth Warren a heartbeat away?

From a lacerating anti-Trump speech carried live on MSNBC and CNN, to endorsing the Democratic nominee on Rachel Maddow’s show, to the Friday morning meeting at Clinton’s home, Warren has been all but shouting that she is available.

And Warren didn’t deflect the question when Maddow asked if she believes she is qualified to take over as commander-in-chief: “Yes, I do.”

Now it may be that the pundits are talking up Warren because she’s a colorful figure who has a slashing style--Donald Trump is a “thin-skinned money grubber” and all that—and rather entertaining to cover. Keep in mind that journalists kept pressing her last year on why she wasn't running for president, and repeatedly refused to take no for an answer.

But there hadn’t been much veepstakes chatter in recent months because Warren had remained neutral during the primaries.

Now I see the surface appeal of Clinton tapping the Massachusetts senator:

Warren is a nationally known figure. That’s not unimportant, as it's hard to sell the country on a little-known politician with no experience in the searing media spotlight.

Warren would be a snarling attack dog against Trump, saying mean things that the nominee can’t or should not say.

She might be able to bring in disaffected Bernie supporters, since her anti-Wall Street populism gets the party’s left wing excited.

But there are problems.

Some point to the fact that Warren and Clinton barely know each other, and Elizabeth once zinged her record on a banking bill. The talk is that Hillary wants someone she is comfortable with as a governing partner. I don’t know, given the history of Kennedy/Johnson, Dole/Kemp and Reagan/Bush, I’d imagine they could find time to do some sisterly bonding. Doesn’t sound like a dealbreaker.

What about a Republican governor filling her seat? That would probably be temporary, but is still a concern for Democrats hoping to recapture the Senate.

Does an all-woman ticket bring anything? Hillary would already be breaking the glass ceiling. And while a CNN poll found that 80 percent of Americans are ready for a female president, that means a fifth of the country isn’t.

No, the real question is whether Warren, running with a nominee who’ll be 69, is ready for the top job.

The essence of Clinton’s candidacy is that she brings ample government experience and Trump brings none. She knows the Senate, she’s the former secretary of State, she was in the Situation Room when crises erupted.

Wasn’t that part of the problem for John McCain when he tapped Sarah Palin?

Ed Rendell, Pennsylvania’s former Democratic governor, told WPHT radio that while Warren is bright and passionate, she “has no experience in foreign affairs and not in any way, shape or form ready to be commander-in-chief.”

The debate would quickly turn to Warren’s views on Iran, Iraq, Syria and ISIS. Sunday's horrible terror attack by a Muslim shooter in a gay Orlando nightclub will ensure that terrorism remains high on the campaign agenda.

Maybe Warren, if she indeed gets the nod, will survive the scrutiny with flying colors. But the tone is certain to be different from the effusive chatter of the veepstakes game.