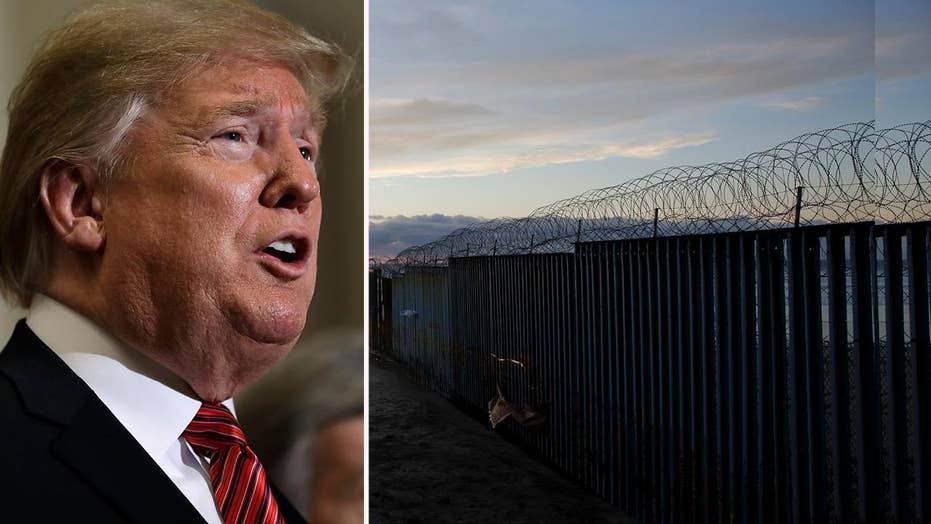 Asylum claims in the U.S. have increased 17,000 percent since 2010; reaction from Katrina Pierson, senior adviser for the Trump 2020 campaign, and Jason Nichols, Democratic political analyst.

News outlets readily described a “crisis” at the border under then-President Barack Obama when he sought funding to deal with a surge of migrants, many of them women and children -- but now that President Trump is in the White House, the mainstream media seem far more reluctant to use the word.

Back in the summer of 2014, the headlines and stories referring to the C-word were plentiful as the border surge was taken seriously along the Acela corridor.

The Washington Post wrote in 2014, “White House requests $3.7 billion in emergency funds for border crisis,” while CNN published a feature, “Daniel's journey: How thousands of children are creating a crisis in America.” It described a problem of "epic proportions."

Around the same time, the Huffington Post declared that “photos of the humanitarian crisis” along the southern border were “shocking,” and ABC News reported that Obama requested “$3.7 billion to cope with the humanitarian crisis on the border and the spike in illegal crossings by unaccompanied minors from Central America.”

AS TRUMP HEADS TO BORDER, DEMS DOUBLE DOWN ON ‘MANUFACTURED CRISIS’ CLAIM

Many of these articles were highlighted in an email blast from the Republican National Committee, which is actively backing Trump's bid to draw attention to the surging migration flow along the border as the president seeks funding for a border wall -- with the government partially shut down amid the impasse. The RNC argued the media are challenging Trump's descriptions, and Democrats outright call it a "manufactured" crisis, at a time when the problem has only grown worse, by some measures.

Concha said much of America’s political media “is pre-conditioned to oppose anything the president supports,” with the coverage of the immigration fight the latest example.

“For years, we heard about how horrible it was for U.S. troops to be in places like Syria or Afghanistan. Trump proposes pulling them out, and suddenly they're for keeping them there,” Concha said. “Same thing with the border.”

Forbes was brief and to the point on Thursday, publishing a headline: “There is no border crisis.”

Vox wrote, “The real crisis is that Trump has no idea what he’s doing," while Houston's ABC affiliate declared that border communities are not willing to accept Trump's "crisis" label.

The Washington Post’s political correspondent Dan Balz penned an analysis headlined, “Trump used the Oval Office to try to create a border crisis.” The New York Times tweeted, “President Trump is set to travel to Texas to address a crisis on the Mexican border that Democrats say does not exist.”

House Speaker Nancy Pelosi and Senate Minority Leader Chuck Schumer said on Tuesday that Trump is working to “manufacture a crisis, stoke fear and divert attention from the turmoil in his administration."

"Democrats, with the aid of a duplicitous mainstream media, now call the very positions they held as recently as a couple of years ago ‘racist’ or ‘bigoted’ or ‘xenophobic,’" conservative strategist Chris Barron told Fox News. "They accuse the president of acting like a tyrant and a fascist for the exact same policies Obama carried out. They deny a crisis at the border after they themselves claimed there was one."

Trump has repeatedly pointed out that Democrats used to support border security measures, including projects that included barriers -- though Obama did not push for an expansive and comprehensive border wall as Trump is. In making his case Thursday, he tweeted a clip of Obama's immigration warnings.

“Sen. Schumer advocated for five times the funding for border security that included wall expansion less than five years ago. Not a peep from the media. Today, Schumer does a 180 and gets a get-out-of-jail free card,” Concha said.