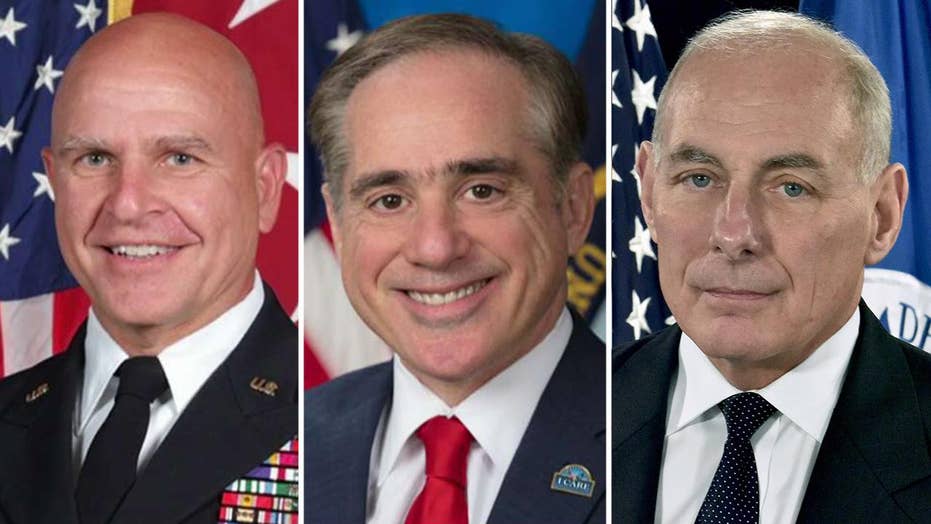 President Trump could be making more changes to his Cabinet this week in the wake of Secretary of State Rex Tillerson's firing, multiple sources told Fox News on Wednesday evening.

The potential changes include the departure of National Security Adviser H.R. McMaster and his replacement by John Bolton, a former U.S. ambassador to the United Nations.

Other departures from the administration would include Department of Veterans Affairs Secretary David Shulkin and Chief of Staff John Kelly.

The sources have cautioned that Trump will make the ultimate decision about all staff changes. However, the departure of McMaster has been described by multiple sources as "imminent."

Kelly would be replaced as chief of staff by Office of Management and Budget Director Mick Mulvaney, the sources said, with Energy Secretary Rick Perry replacing Shulkin at the VA. Ray Washburne, the chairman of the Overseas Private Investment Corporation, would replace Perry as energy secretary.

"I've gotten to know a lot of people very well over the last year," Trump told reporters at the White House, "and I'm really at a point where we're getting very close to having the Cabinet and other things that I want."

Trump has had a turbulent relationship with many members of his Cabinet. Last summer he began publicly bashing Attorney General Jeff Sessions, a former close adviser who was the first senator to back his campaign.

Trump has used the words "beleaguered" and "disgraceful" to describe Sessions, who only recently stood up to the president and defended his decision to recuse himself from the inquiry into Russian influence in the 2016 presidential election. Earlier Wednesday, Vanity Fair reported that Trump has discussed firing Sessions and replacing him with EPA Administrator Scott Pruitt.

Tillerson also frequently clashed with Trump, who never forgave the outgoing secretary of state for reportedly calling him "a moron" last summer after grumbling that the president had no grasp of foreign affairs.

Trump's esteem for the Cabinet has faded in recent months, The AP reported, citing two White House officials and two outside advisers. He also told confidants that he was in the midst of making changes to improve personnel and, according to one person who spoke with him, "get rid of the dead weight" — which could put a number of embattled Cabinet secretaries on notice.

Interior Secretary Ryan Zinke underwent questioning Tuesday by Senate Democrats, who accused him of spending tens of thousands of dollars on office renovations and private flights while proposing deep cuts to conservation programs. Zinke pushed back, saying he "never took a private jet anywhere" — because all three flights he had taken on private planes as secretary were on aircraft with propellers, not jet engines.

Shulkin's days at the VA may be numbered after a bruising internal report found ethics violations in connection with his trip to Europe with his wife last summer, according to senior administration officials. He also has faced a potential mutiny from his own staff: A political adviser installed by Trump at the Department of Veterans Affairs has openly mused to other VA staff about ousting the former Obama administration official.

Perry, after a Senate hearing Wednesday, said he was not interested in changing jobs, adding "I am energy secretary from now until the forseeable future. Happily."