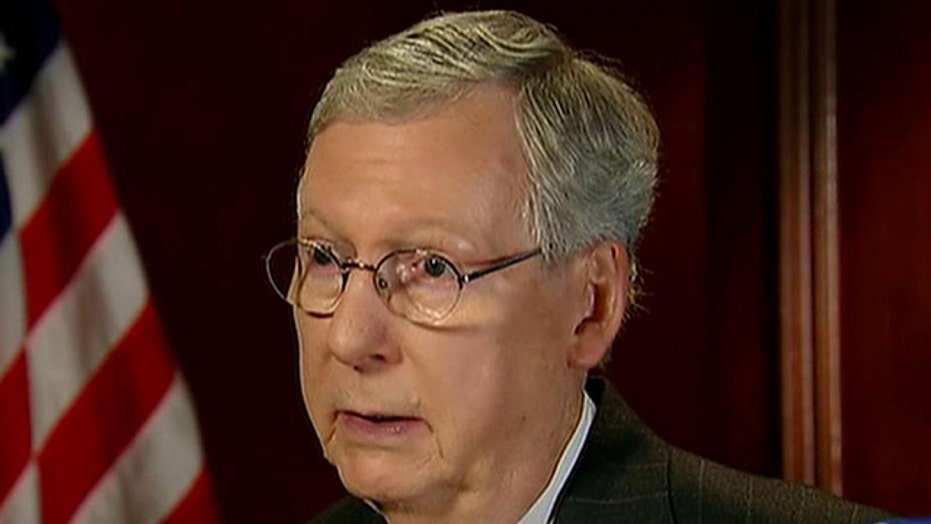 McConnell: 'We became dysfunctional ... nothing happened'

Exclusive: The soon-to-be Senate Majority leader on what it will mean to bring normalcy back to the Senate, Sen. Harry Reid's political miscalculation, how a government shutdown will be avoided and future battles over ObamaCare

Incoming Senate Majority Leader Mitch McConnell told Fox News’ Greta Van Susteren Thursday that he plans to get the Senate back to work after what he called years of dysfunction, saying it has become “a place where nothing happened.”

McConnell, R-Ky., said on “On the Record” that it is clear after the midterm elections the American people are tired of the status quo in the Senate, which he blamed on President Obama.

He said his goal is to return the Senate to “normal.”

“The Senate, sort of, frequently didn’t vote anymore for the last four years,” he said. “And the reason for that was the president figured he got all the legislation he wanted the first two years and after that he wanted to be left alone. And Harry Reid and the Democratic majority guaranteed he never got anything that even made him think twice. So we became dysfunctional, a place where nothing happened.”

McConnell said that soon after he won his re-election, against Democratic candidate Alison Lundergan Grimes, he received calls from some Senate Democrats.

Although, he said, they were not happy he had won, they were hopeful the Senate would be more productive under his leadership.

“I think what they were happy about was they thought I would run the Senate differently, respect the views of members regardless of party, give them the opportunity to vote on amendments that they offer, their ideas, and were pretty excited about the fact that we intend to get the Senate back to the way it operated for a very long time before the past four years.”

McConnell also discussed his Wednesday meeting with the president, with whom he said he rarely meets.

McConnell said they “tried to focus on things that there might be some agreement on,” rather than what they disagreed on. He cited the corporate tax rate, trade agreements and infrastructure improvement as possible areas of agreement.

However, McConnell criticized Obama’s recent executive actions on immigration, calling them “not helpful.”

“In fact almost everything said since the election makes it look like he was totally unaffected by the outcome of the election,” he said.