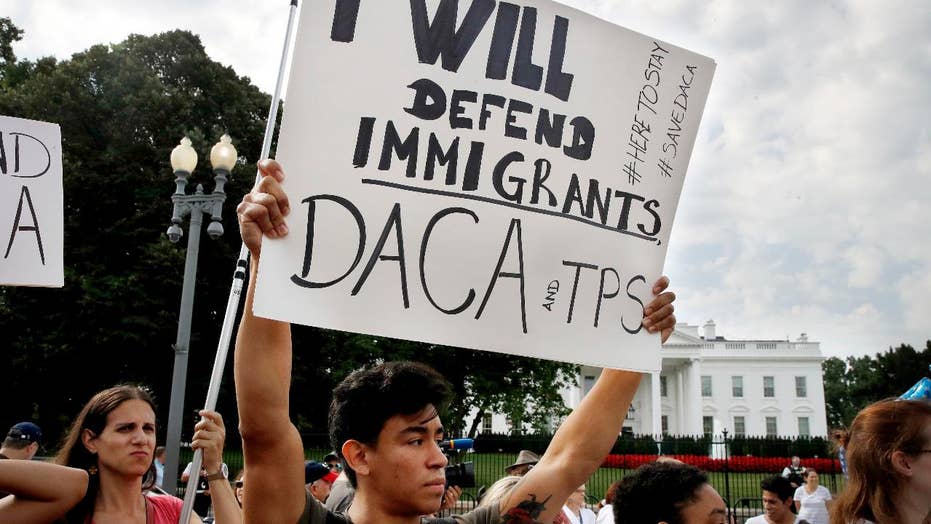 Day One of a government shutdown, filled with increasingly angry finger pointing from both Democrats and Republicans, appeared to produce little Saturday in terms of a potential solution for the impasse on how to fund the government.

But Senate Majority Leader Mitch McConnell insisted that a vote to break a Democratic filibuster on a short-term spending bill to reopen the government would happen by 1 a.m. Monday.

"I asked for consent to move up a vote on this bipartisan solution and end this craziness. The Democrats objected," McConnell said late Saturday, Roll Call reported. "That won't work forever. If they continue to object, we cannot proceed to a cloture vote until 1 a.m. Monday.

"But I assure you," McConnell added, "we will have the vote at 1 a.m. Monday, unless there is a desire to have it sooner."

The shutdown kicked in late Friday into Saturday after Senate Democrats blocked a 28-day resolution to keep the government open. The bill would have funded the government, and included a six-year extension of funding for the Children’s Health Insurance Program (CHIP). But Democrats rejected it, as it did not include a legislative fix for the Deferred Action for Childhood Arrivals (DACA) program.

'Happy anniversary, Mr. President. You wanted a shutdown. The shutdown is all yours.'

That Obama-era program, which offered protection for illegal immigrants brought to the U.S. as children, was repealed by President Donald Trump in September, with a March deadline for Congress to come up with a fix. While separate bipartisan immigration talks had been underway, Democrats demanded a DACA fix as part of the continuing resolution (CR) -- requiring Republicans to try in vain to cobble together the 60 votes needed to overcome a filibuster.

On Saturday, although both the House and the Senate were in session, both sides seemed more focused on pushing their respective narratives about who was to blame for the crisis.

When McConnell, R-Ky, addressed lawmakers Saturday evening, he urged his Democratic counterpart, Sen. Chuck Schumer of New York, to withdraw his filibuster so that members could pass the short-term spending bill and reopen the government.

McConnell said the shutdown was not a crisis, but rather a “manufactured crisis” by the Senate Democrats.

Through Day One, Democrats pointed fingers at Republicans, arguing that they could not blame Democrats for the shutdown at a time when the GOP has control of the House, the Senate and the White House.

House Democratic Leader Nancy Pelosi, D-Calif., took aim at Trump, saying he had earned an F for "failure in leadership." She said Republicans are "so incompetent and negligent that they couldn't get it together to keep the government open."

“Happy anniversary, Mr. President,” Pelosi said. “You wanted a shutdown. The shutdown is all yours.”

Schumer said on the Senate floor that in a White House meeting Friday, he offered Trump funding for a border wall with Mexico in exchange for a DACA fix. He claimed that Trump seemed open to a deal but that the president made further demands hours later that Schumer said were "off the table."

“Republican leadership can't get its tumultuous president on board with anything,” Schumer said. “The breakdown of compromise is poisoning this Congress and it all comes down to President Trump.”

Republicans, for their part, blasted Democrats for what they saw as holding the government “hostage” over illegal immigration. White House Legislative Affairs Director Marc Short accused Democrats of having a “2-year-old temper tantrum.” 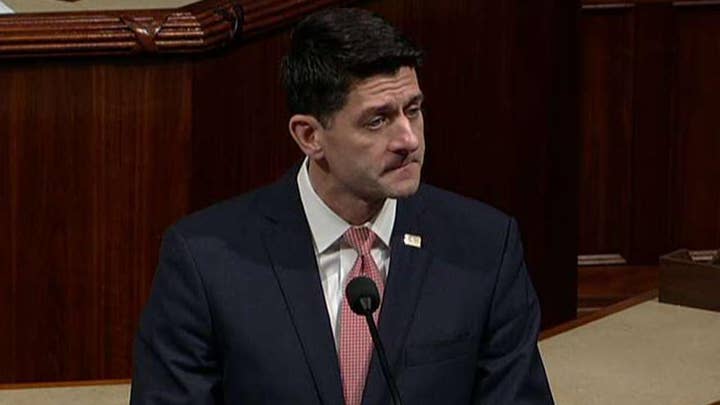 Trump accused the Democrats of “holding our Military hostage” over their desire for “unchecked illegal immigration.”

What's more, the White House pushed back against Schumer's account of the Trump meeting. Office of Management and Budget Director Mick Mulvaney said at a briefing that Schumer had in fact offered only $1.8 billion in funding for the wall, far short of the roughly $20 billion Trump wanted. Mulvaney said Schumer still told Trump that he was giving him everything he wanted.

“Does it even become profitable to work with someone like that?” Mulvaney asked reporters.

A sign of the bitterness of the blame game came from the White House comments line, where a voicemail blamed Democrats for users being unable to use the line.

“Thank you for calling the White House, unfortunately, we cannot answer your call today because congressional Democrats are withholding government funding, including funding for our troops and other national security priorities, hostage to an unrelated immigration debate. Due to this obstruction, our government is shut down,” the voicemail said.

As evening rolled around, there seemed to be little sign of a break. Fox News was told that a Senate Democratic caucus meeting resulted in a caucus more unified and locked in, with Democrats only willing to support a CR that would fund the government for a few days.

On the Republican side, Fox News was told that there was a good chance McConnell would try a vote on a CR that would fund the government to Feb. 8 -- less time than the initial 28-day CR.

The White House also buckled in, saying it would not negotiate on DACA until the government was funded.

“The White House position remains the same, that we will not negotiate the status of 690,000 unlawful immigrants while hundreds of millions of taxpaying Americans, including hundreds of thousands of our troops in uniform and border agents protecting our country, are held hostage by Senate Democrats,” Short said.