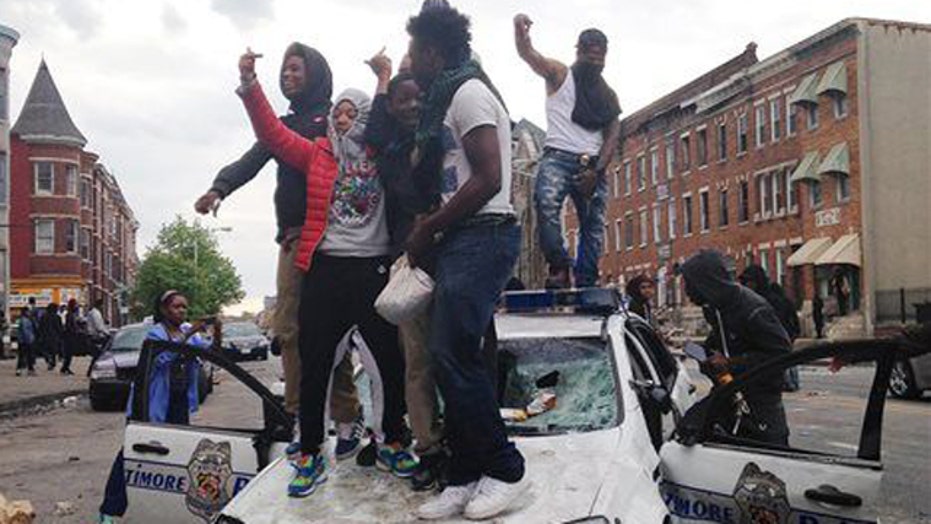 Could more have been done to prevent Baltimore riots?

Many were baffled at police stand by as looters sets cars on fire, hurled bricks at onlookers. Was enough done by law enforcement? Were their hands tied? #BaltimoreRiots

The governor of Maryland promised Tuesday to put the appropriate assets in place to prevent further looting that was seen in Baltimore in the past 24 hours in reaction to the funeral of Freddie Gray, a young black man who died while in police custody.

Gov. Larry Hogan, a Republican, said officials in his cabinet have been meeting with city leaders to better prepare for any new unrest. Hogan said he would not point fingers about the city's response under Mayor Stephanie Rawlings-Blake.

Rawlings-Blake was under intense pressure to defend her response to the violence that has ripped apart her city following Gray's funeral, particularly her remarks in which she suggested those who "wished to destroy" need their space.

With more than a dozen officers injured in clashes with rioters and looters, some -- including Hogan-- are questioning whether Rawlings-Blake should have acted sooner and taken a tougher tone to prevent the demonstrations from getting out of control.

"When the mayor called me, which quite frankly we were glad that she finally did, instantly we signed the executive order," Hogan said earlier. "We [had] our entire team prepared. ... We were trying to get in touch with the mayor for quite some time. She finally made that call and we immediately took action."

Since that call was made, 500 National Guard members have deployed, and a spokesman told Fox News they are building to 2,000. There have been reports of looting on Tuesday morning.

The mayor, for her part, has also announced a 10 p.m. ET curfew starting Tuesday night, as the city and state try to restore order in the troubled city.

But over the weekend, Rawlings-Blake made what some saw as inflammatory remarks as she described how she had instructed police to give residents protesting the death of Freddie Gray while in police custody the opportunity to exercise their right to free speech.

She seemed to take that notion a step further: "It's a very delicate balancing act, because, while we tried to make sure that they were protected from the cars and the other things that were going on, we also gave those who wished to destroy space to do that as well.

"And we worked very hard to keep that balance and to put ourselves in the best position to deescalate, and that's what you saw."

As her "destroy" remarks faced a buzzsaw of criticism amid the riots Monday, the mayor initially tried to deny she said them.

"I never said nor would I ever say that we are giving people space to destroy our city, so my words should not be twisted," the mayor said Monday.

In a press conference, she accused critics of a "blatant mischaracterization."

But her office eventually released a written statement acknowledging she said those words -- while attempting to explain them.

Howard Libit, director of strategic planning and policy, said: "What she is saying within this statement was that there was an effort to give the peaceful demonstrators room to conduct their peaceful protests on Saturday. Unfortunately, as a result of providing the peaceful demonstrators with the space to share their message, that also meant that those seeking to incite violence also had the space to operate. ...

"The mayor is not saying that she asked police to give space to people who sought to create violence. Any suggestion otherwise would be a misinterpretation of her statement."

Rioters threw bricks at police officers, stomped on cars and looted stores Monday after what had been peaceful protests following the death of Freddie Gray.

"It's very clear that she was trying to give all these protesters-slash-rioters a chance to blow off steam and then stop. It didn't happen," he said.

He accused Rawlings-Blake of not taking a "leadership role."

In a statement released Monday night, Lynch said, "I condemn the senseless acts of violence by some individuals in Baltimore that have resulted in harm to law enforcement officers, destruction of property and a shattering of the peace in the city of Baltimore...The Department of Justice stands ready to provide any assistance that might be helpful."