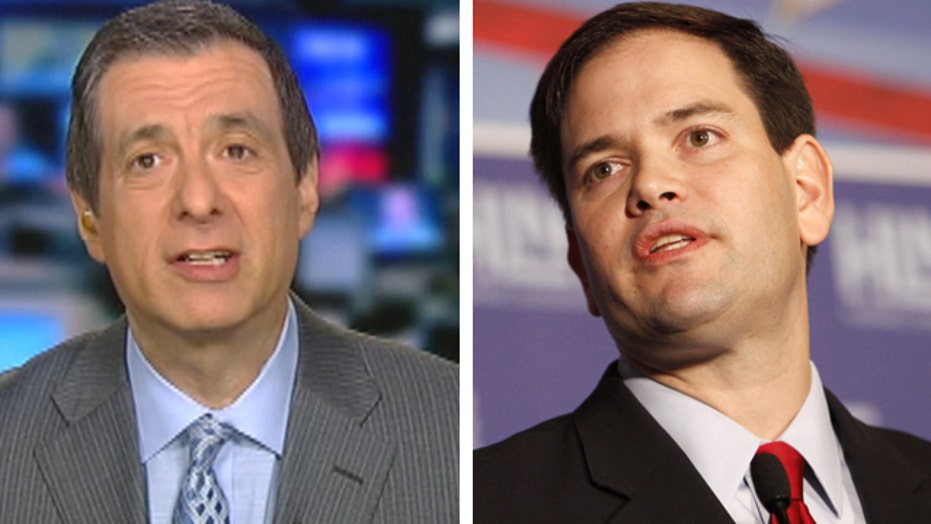 It’s been fascinating to watch the media “discover” Marco Rubio as the GOP’s new front-runner.

His stock has been undervalued for some time, and I expected him to break into the top tier in the coming months. But Rubio himself is dismissing the latest polls as much ado about a fleeting snapshot.

First, the numbers: Rubio is suddenly leading the field in a Fox News poll with a less-than-overwhelming 13 percent, just a tick ahead of Scott Walker (12), Rand Paul (10), Jeb Bush and Mike Huckabee (9), and Ted Cruz (8).

Not bad for a freshman senator, until you realize that the poll’s margin of error is 5 percent. Meaning that, in theory, Cruz could be first and Rubio could be sixth.

The media are fairly amazing in their ability to hyperventilate over a single percentage point.

Still, Rubio is also leading in a Quinnipiac poll. And there’s obviously been some movement since a Fox survey in late March, when Rubio lagged at 8 percent and Walker was leading with 15 percent.

More important than fleeting polls are Rubio’s obvious strengths: he’s young, a gifted communicator, the son of Cuban immigrants, and happens to hail from the crucial swing state of Florida.

The bump (if it is a bump) may just reflect the publicity from Rubio officially jumping into the race, despite the conventional wisdom that he had been overshadowed by Hillary Clinton’s video announcement the day before.

Jeb Bush, Rubio’s onetime mentor, has gotten far more media attention, even for the Paleo diet that has helped him drop 30 pounds. In fact, one of the most popular Rubio story lines involves the evolution and possible strain on the Jeb-and-Marco friendship.

What’s missing from the coverage is Rubio’s depth in talking about issues. He has, for instance, a pretty detailed tax reform plan that has generated almost no headlines.

Rubio gets angry that Republicans are portrayed as the party of the rich and believes party leaders need to talk more about working Americans. But he also knows that brand will be difficult to change.

He also knows that he alienated part of the GOP base by working with Democrats to push immigration reform through the Senate, only to see it die in the House. Rubio now believes a sweeping bill cannot pass and that border security must come first. But he still supports a path to citizenship for illegal immigrants already in this country, although that could take a decade or more—a more moderate stance than, say, Mitt Romney’s self-deportation idea.

The press is starting to revisit that episode now that Rubio seems to be more of a 2016 factor. In a front-page piece over the weekend, the Washington Post said:

“Instead of a triumph, Rubio’s involvement with the immigration bill became a cautionary tale about a gifted freshman who had miscalculated his capability.”

Rubio’s biggest liability is that (like Cruz and Paul) he’s a first-term senator in a party that has been assailing the election of the last first-time senator in 2008. He contends that his experience is very different from Barack Obama’s—he was speaker of the Florida House, for instance—but may have a tough sales job on that score.

The good news for Rubio is that he’s now the nominal front-runner. That’s also the bad news. Tougher media scrutiny can’t be far behind, and how he handles it will be a major test of his fledgling candidacy.