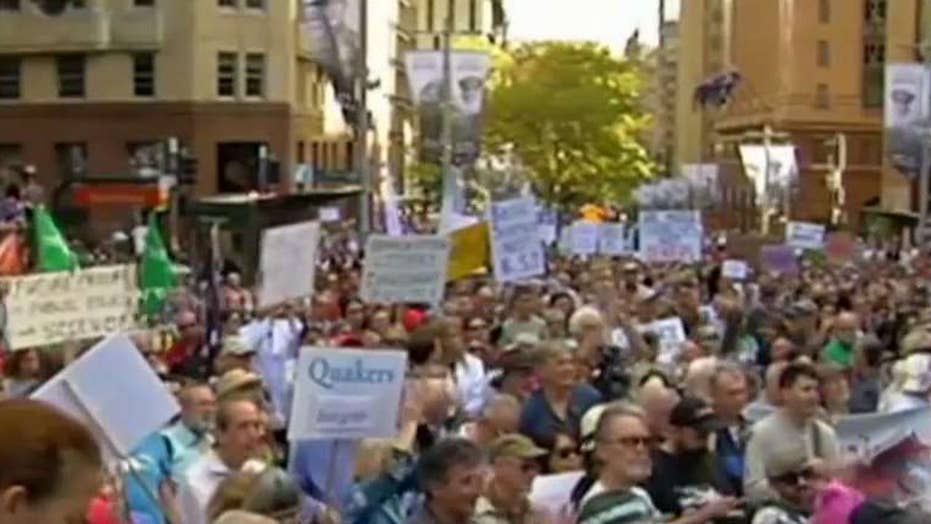 'Marches for Science' planned in cities around the world

March for Science rallies were held across the country Saturday in response to what organizers and attendees see as increasing attacks on science and concerns about looming cuts in government spending.

“When scientists were told on January 25 to be silent, this rally was conceived,” poet Jane Hirshfield told a rain-soaked crowd at a rally near the Washington Monument, footsteps from the White House that President Trump took over on January 20.

Hirshfield was preceded on stage by New Wave star Thomas Dolby, who sang his 1982, techo-influenced hit “She Blinded Me with Science.”

Trump critics say they are concerned about the president’s proposed cutbacks for the Environmental Protection Agency and the National Institutes of Health, his administration’s skepticism about the cause of climate change and other science-related issues.

However, organizers say the march was political but not partisan -- to in fact promote the understanding of science and defending it from attacks, including a proposed 20 percent cutback at the NIH.

"It's not about the current administration,” said co-organizer and public health researcher Caroline Weinberg. “The truth is we should have been marching for science 30 years ago, 20 years, 10 years ago. … The current (political) situation took us from kind of ignoring science to blatantly attacking it. And that seems to be galvanizing people in a way it never has before.”

The rallies, coinciding with Earth Day, were held in more than 500 cities worldwide including New York, Chicago and Geneva.

Marchers in Geneva carried signs that read, "Science -- A Candle in the Dark" and "Science is the Answer."

“We are marching today to remind people, especially our lawmakers, about the significance of science,” Bill Nye, a TV science educator, said at the Washington rally.

"Rigorous science is critical to my administration's efforts to achieve the twin goals of economic growth and environmental protection,” Trump said in a statement as the rallies began.

“My administration is committed to advancing scientific research that leads to a better understanding of our environment and of environmental risks. As we do so, we should remember that rigorous science depends not on ideology, but on a spirit of honest inquiry and robust debate.”

In London, physicists, astronomers, biologists and celebrities gathered for a march past the city's most celebrated research institutions. Supporters carried signs showing images of a double helix and chemical symbols.

The protest was putting scientists, who generally shy away from advocacy and whose work depends on objective experimentation, into a more public position.

Signs and banners readied for the Washington rally reflected anger, humor and obscure scientific references, such as "No Taxation without Taxonomy."

Taxonomy is the science of classifying animals, plants and other organisms.

Scientists involved in the march said they were anxious about political and public rejection of established science such as climate change and the safety of vaccine immunizations.

"Scientists find it appalling that evidence has been crowded out by ideological assertions," said Rush Holt, a former physicist and Democratic congressman who runs the American Association for the Advancement of Science. "It is not just about Donald Trump, but there is also no question that marchers are saying 'when the shoe fits."