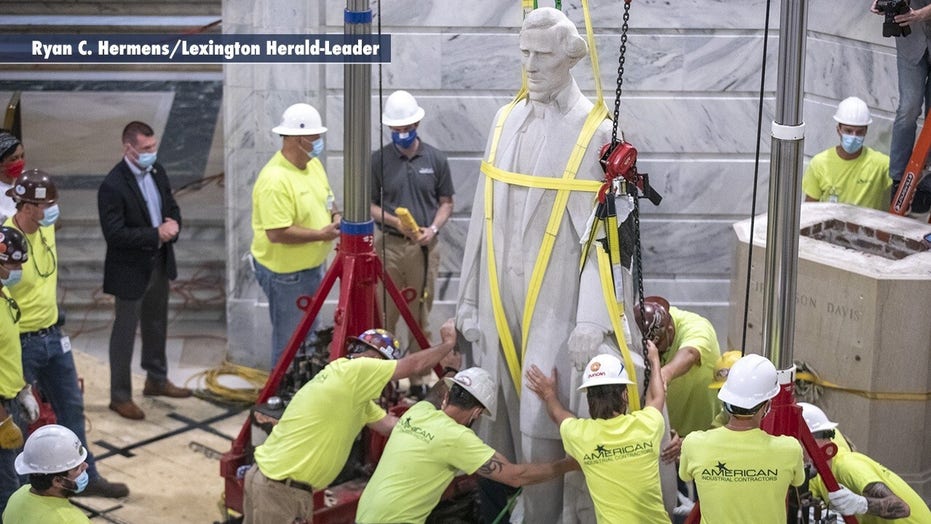 A majority of voters support removing Confederate statues from public spaces around the country, according to a new national poll.

But the Quinnipiac University survey released on Wednesday also indicates that voters are split over renaming U.S. military bases that were named after Confederate generals. And the poll shows an extremely wide partisan divide on the issue.

There’s long been a national debate over removing Confederate flags, statues and other symbols as the country continues to grapple with the legacy of the Civil War and those Southern figures who fought on the side of maintaining slavery.

But the debate has flared in recent weeks, as protests spread across the country sparked by the death of George Floyd, a 46-year-old black man who died after a white Minneapolis police officer put his knee on the handcuffed Floyd’s throat for nearly nine minutes.

According to the poll, voters support by a 52-44 percent margin removing Confederate statues from public spaces around the country. That’s up double digits from August 2017, when just 39 percent supported the removal of Confederate statues and 50 percent opposed. The earlier survey was conducted soon after violence at a ‘Unite the Right’ rally in Charlottesville, Va., attended by white supremacists and neo-Nazis grabbed national headlines.

Eight out of 10 Republicans questioned opposed removing Confederate statues, with 85 percent of Democrats favoring the removal. Independents, by a narrow 50-46 percent majority, supported the removal of the statues.

Voters questioned in the survey were split 47-47 percent over renaming military bases that were named after Confederate generals.

Eighty-six percent of Republicans opposed renaming the bases, with 81 percent of Democrats favoring renaming them. Independents, by a narrow 49-44 percent plurality, opposed the move.

Presumptive Democratic presidential nominee Joe Biden on Friday announced he’s backing a proposal to begin the process of removing the names. The plan is part of a larger defense appropriations bill passed by bipartisan support last week in the Senate Armed Services Committee.

“The names affixed to our military installations must honor the diverse heritage of leadership and sacrifice in our country’s history,” Biden said in a statement. He added that he backs the “bipartisan effort to form a commission to rename Defense Department facilities named after Confederate leaders in the next three years, and look forward to implementing the commission’s work as president.”

The statements by Biden are at odds with President Trump who tweeted last week that his “Administration will not even consider the renaming of these Magnificent and Fabled Military Installations.”