Louisiana Gov. John Bel Edwards reportedly signaled he would sign his state's "heartbeat" legislation -- effectively banning abortions after just weeks of pregnancy -- as his party faced questions over whether it should be more inclusive of pro-life voices.

“When I ran for governor, I said I was pro-life and so that’s something that’s consistent," he reportedly said when asked about the bill on Thursday.

The bill, which awaited a vote from the Louisiana House of Representatives, would make the state one of the strictest on abortion access -- following a slew of other states that passed restrictions in an apparent attempt to make the Supreme Court reconsider major precedent on the issue.

Pro-life advocates have heralded measures like "heartbeat" legislation while groups like Planned Parenthood have challenged them in a series of legal battles. Louisiana's bill could face a lawsuit from the same group -- the American Civil Liberties Union -- that sued Ohio over its own "heartbeat" legislation.

“My position hasn’t changed. In eight years in the Legislature, I was a pro-life legislator,” Edwards said. Edwards attributed his pro-life stance to his faith but it also appeared to hold personal significance. Nearly three decades ago, he and his wife decided to have his daughter, diagnosed as a baby with spina bifida, against the doctor's advice to abort.

During his monthly radio show, the governor seemed to acknowledge his break with Democrats, who have continually denounced state-level legislation like Louisiana's. 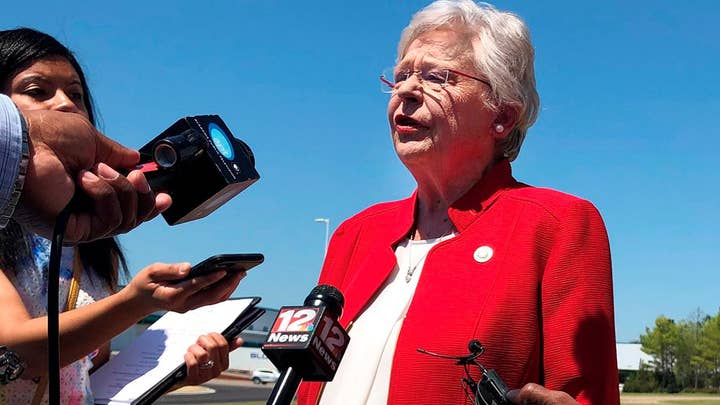 “I know that for many in the national party, on the national scene, that’s not a good fit. But I will tell you, here in Louisiana, I speak and meet with Democrats who are pro-life every single day," he said.

Democrats like Edwards were in a tough spot politically as the Supreme Court acquired an apparent conservative majority and members of their own party pushed more controversial forms of abortion.

In 2016, former Democratic presidential nominee Hillary Clinton lost after a fiery confrontation with then-candidate Donald Trump who spotlighted her support for late-term abortion during a debate. It also appeared to prompt media questions as to whether the party should expand its tent to be more welcoming to pro-life voters.

“Every Democrat, like every American, should support a woman’s right to make her own choices about her body and her health,” Democratic National Committee Chairman Tom Perez previously said.

According to a Marist poll from 2019, Democrats varied in their opinion on abortion restrictions. But a strong majority -- 60 percent -- said they favored limiting abortion to the first trimester, unsual circumstances (rape, incest, life of the mother), or not permitting it at all. Another poll from May showed that overall, registered voters thought heartbeat bills were either "just right" or "too lenient." That contrasted with 45 percent who said they were "too restrictive."

Democrats for Life, which voiced support for "heartbeat" legislation, has challenged the party on this point in particular -- calling for things like more inclusive language from party leadership and a Democratic Pro-Life Political Action Committee.

Congressional Democrats have acknowledged that being pro-life and Democrat was possible but, as Senate Minority Leader Chuck Schumer, D-N.Y., clarified, the party was "strongly pro-choice."

JOE SCARBOROUGH: GOP 'EXTREMISM' ON ABORTION IS 'SCARING THE HELL OUT OF A LOT OF AMERICANS'

Schumer, who blasted a "heartbeat" legislation passed on Friday in Missouri, has formed a unified front with House Speaker Nancy Pelosi, D-Calif., in vehemently opposing pro-life initiatives pushed by Trump and others.

Trump, whom pro-life leaders have praised, aroused Democratic fears in 2018 when he appointed Supreme Court Justice Brett Kavanaugh to a Court that seemed evenly divided along ideological lines on that issue. Kavanaugh could consider laws from Edwards' state and others if they reach the Supreme Court -- potentially ending protections established under Roe v. Wade or Planned Parenthood v. Casey.

Heading into the 2020 elections, Trump has tried to tie Democrats to late-term abortion. Democrats like New York Governor Andrew Cuomo, who pushed a bill allowing abortions up to the point of birth, have faced intense scrutiny over their support on the issue.

But as Democrats encountered accusations they supported "extreme" abortion proposals, Republicans did as well. The party appeared to wrestle with the issue after Alabama passed an abortion ban that excluded exceptions for rape and incest -- provisions that Ronna McDaniel, the party's chair, "personally" opposed.