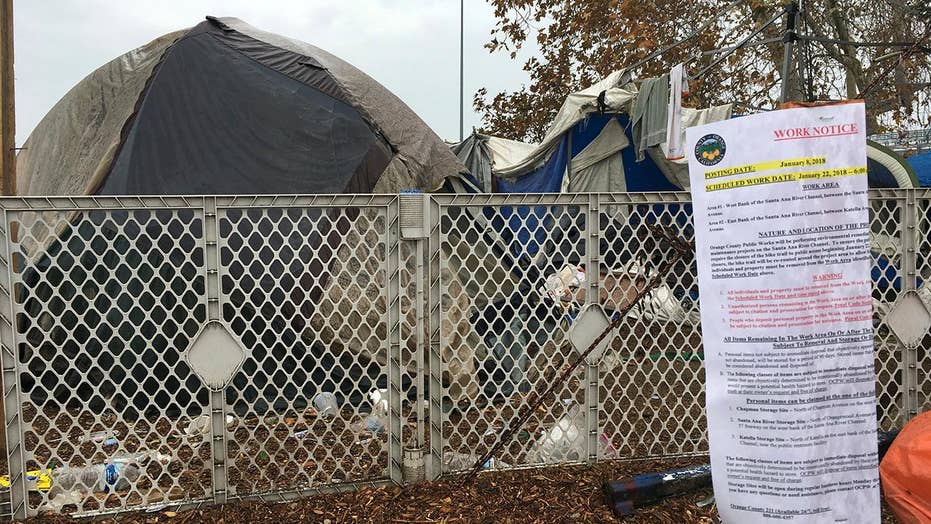 The explosion of homeless encampments alongside railroad tracks has contributed to a spike in delays for California's rocketing passenger ridership, an outbreak of accidental fires and deadly collisions, frustrating executives who call the impact on passengers "unacceptable."

In a recent note to passengers, the Capitol Corridor Joint Powers Authority said on-time performance on the route between Sacramento and the Bay Area has taken a hit in the past six months due to a combination of track signal problems, mechanical issues, bridge closures and trespasser incidents.

Capital Corridor trains ran between 92 and 95 percent on-time as of 3 years ago, but have recently slipped to an on-time rate of 90 percent, Managing Director David Kutrosky told Fox News on Tuesday.

"The Capitol Corridor’s service in the past year, and particularly over the past six months, has not been up to the levels you are used to and have come to expect from us," Kutrosky said in his note to riders.  "I know this is frustrating for you. It is frustrating, and unacceptable, for us as well."

A Capitol Corridor train rolls through Martinez, California in Feb. 2015. Officials say there has been an increase in the homeless population along the rail corridor recently that's impacting operations. (Reuters)

But it's the trespassing incidents, where individuals unlawfully walk on or near railroad tracks and sometimes are hit by an oncoming train, that Kutrosky told Fox News on Tuesday has "accelerated" in 2018.

Those incidents can prove to be the most disruptive because they require an investigation by authorities that can take hours to clear up, especially if someone is killed. That causes rippling delays along the corridor, which saw 1.56 million passengers in 2016.

"You cannot move the train without authorization of the coroner's office," Kutrosky told Fox News. "That's where there's issues with train service."

From 2016 to 2017, trespasser fatalities along the Capitol Corridor went down from 22 to 16, but injuries rose from two to four, according to a yearly report by the agency.

"It bears repeating, being on or alongside railroad tracks is not only unwise, but it is also illegal because technically that area, also called the 'right of way,' is owned by UP(Union Pacific)," Kutrosky said in his note to riders.

Even if no one is struck by a train, rail officials say that incidents along the railroad right-of-way, such as fires on adjacent properties or debris on the tracks, may require service to be disrupted while authorities investigate.

Irvine, California residents are concerned about plans to house the homeless in their city after moving encampments from the Santa Ana River.

If a person is on the tracks, or appears like they may step in front of a train, Kutrosky told the Sacramento Bee that engineers will have to go into "emergency braking applications" that may take 10 minutes to reset the train's engine once it comes to a stop.

Union Pacific spokesman Justin Jacobs told Fox News on Monday that the topic of homeless encampments is not a new issue, but has been receiving more attention.

"Recently we have seen an uptick in the trend and location in the last couple of months, especially as West Coast weather becomes more favorable for that type of lifestyle," Jacobs said.

A homeless encampment in East Oakland, Calif., which crews removed in August 2017. (KTVU)

In California, the problem has been focused in the Bay Area, around Los Angeles, and the corridor between San Jose, Oakland, and Sacramento, according to Jacobs. The Pacific Northwest is also starting to become a "concern."

"Anytime you have people on or near the railroad right of way, we worry about collisions," he said.

Union Pacific, which has its own police department, works "very hard" with local authorities to touch base with the populations to educate them on safety hazards and try to partner organizations, including nonprofits, to work to assist people living in those areas. Last August, the railroad evicted people from a large encampment that was located in East Oakland, KTVU reported.

Besides the danger posed by people getting struck by trains, UP has also had to deal with trestle and bridge fires in the past year due to the homeless population, according to Jacobs. In November, 200-feet of a wooden train trestle located near a homeless encampment in San Jose was damaged by a fire, The Mercury News reported at the time.

"There are multiple layers to this whole thing," Jacobs said.

City officials have begun what they are calling a slow and methodical clean-up and removal of a large homeless encampment along the Santa Ana River Trail in Anaheim. (Reuters)

The impacts of striking a person is also felt on the emotional level by the railroad workers operating the train involved. Jacobs told Fox News that, in the event of a deadly trespass incident, UP has an internal program that an engineer and conductor go through to handle any trauma.

The CCJPA is now asking riders to report any encampments or large piles of trash that may be located along the tracks in an online feedback form. The rail authority said it will work with UP to get clean-up crews to respond to the scene.

“Frankly, we have a business to run, a service to the public. If people can’t depend on the train being on time, they will choose other options,” Capitol Corridor board chair Lucas Frerichs told the Sacramento Bee.

Store owners say they are tired of picking up needles left behind by the homeless addicts.

The Capitol Corridor authority said it recently received a state grant to discourage trespassing and encampments by installing "protective fencing along particularly vulnerable areas of the route" in addition to hiring a crew this month dedicated to regularly clearing vegetation and removing trash and other debris along the tracks.

Kutrosky said the abatement crew will go after "trouble spots" where encampments are located at spots along the right of way, in addition to adding fencing to deter people from nearing trackside areas. The agency will also begin compiling a database to keep track of where additional resources may be needed.

"This will be another element in our arsenal to keep the threats off the right of way, and focus on improving our service performance," he told Fox News.

For those who live in the encampments near the tracks, the space is considered a spot where no one bothers you.

“It's kind of out in the boonies,” Joe Stenman told the Bee.

Stenman, who is 62 and has been homeless for 20 years, said he was told to leave from another spot a few weeks ago but resettled in a spot between UP and light rail tracks.

“Some people walk along the side of the tracks,” he told the paper. “But people don't mess with the trains. Most people are smart enough to tell if there is a train coming, or not, you know.”