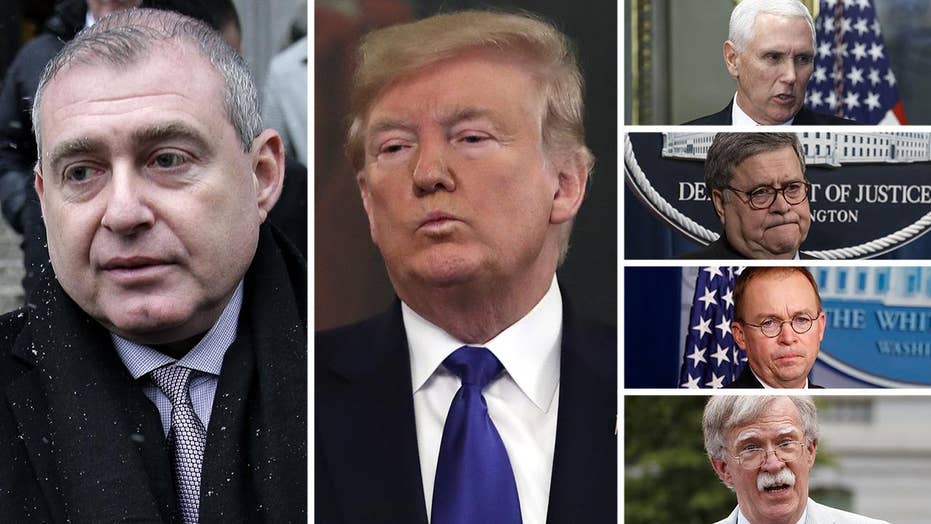 Lev Parnas, the indicted associate of President Trump's personal lawyer Rudy Giuliani, on Wednesday night undercut Democrats' explosive suggestion that the Trump team had former U.S. ambassador to Ukraine Marie Yovanovitch under surveillance, saying in a televised interview that text messages that seemingly suggested Yovanovitch was being secretly monitored were in reality just the ramblings of a "drunk."

Speaking to MSNBC's "The Rachel Maddow Show" a day after he provided a slew of new documents and text messages to House investigators, Parnas repeatedly said prominent Trump donor Robert F. Hyde wasn't being serious when he claimed in some of those communications to know Yovanovitch's whereabouts in Kiev. 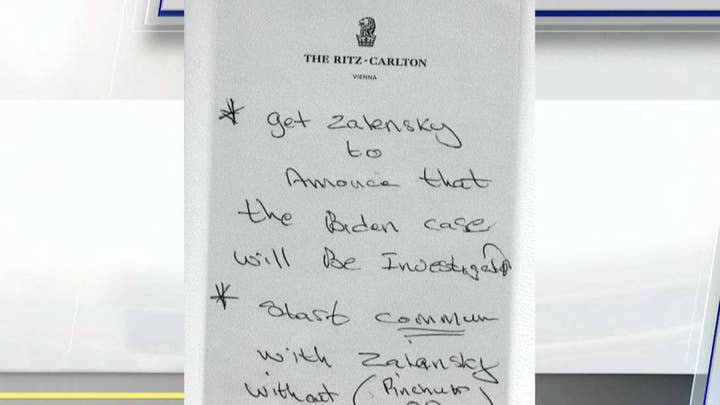 "I don't believe it was true, I think he was either drunk or was trying to make himself bigger than he was," Parnas told Rachel Maddow, adding that he was "disturbed" by the "crazy" text messages. "I didn't take him seriously. I didn't even respond to him most of the time. If I did, it was something like 'LOL' or 'Okay' or 'Great' or something like that."

"I think he got into something with Greg Pence, Mike Pence's brother, thinking that the Secret Service was after him and somebody wants to kill him," Parnas told Maddow. "Once he started texting me that, that was the end of our relationship."

Parnas, who laughed as soon as Maddow mentioned Hyde's name and called him a "weird individual," added: "Eventually, as you can see, I cut him off."

When Maddow pointed out that Hyde's texts went on for several days, and doubted that someone could be intoxicated for so long, Parnas quickly sought to disabuse her of that notion.

"He's drunk the whole time," Parnas responded. "He wakes up and he's drunk. He starts at 6. I've never seen him not drunk."

("She's talked to three people. Her phone is off. Computer is off," Hyde wrote to Parnas on March 25, 2019, according to the documents provided by Parnas released by Schiff. It was unclear how Hyde would know that Yovanovitch's computer was not on. "She's next to the embassy," he wrote in another message. "Not in the embassy. Private security. Been there since Thursday.")

At the same time, Parnas told Maddow that the Trump team had publicly accused Yovanovitch of corruption as part of an organized smear campaign because she stood in the way of the plot to get an investigation into former Vice President Joe Biden started.

"That was the only motivation," Parnas said.

However, The Washington Post has reported that Parnas told Trump privately in April 2018 that Yovanovitch was bad-mouthing the president, and that Trump responded by saying she should be fired -- contradicting Parnas' claims Wednesday that Trump directed her termination to get a probe of the Bidens. The Daily Caller's Chuck Ross first flagged the inconsistency in Parnas' claims.

And, in charging documents, prosecutors have said Parnas was acting in part at the direction of a Ukrainian official in seeking Yovanovitch's removal. The Trump administration has openly been trying to oust Yovanovitch since early 2018, with then-Attorney General Jeff Sessions even sending a letter to that effect to Secretary of State Mike Pompeo.

Maddow did not ask Parnas about his own pending federal criminal case for making false statements and falsifying records, his previous claims about Yovanovitch, or prosecutors' assertions that Ukrainian officials wanted the diplomat gone.

For his part, Giuliani has since acknowledged his role in Yovanovitch's ouster, calling her corrupt. In his infamous July 2019 call with Ukraine's president, Trump remarked: "She’s going to go through some things,” referring to Yovanovitch.

The show began Wednesday night with Maddow noting Parnas and his business partner Igor Fruman, both U.S. citizens who emigrated from the former Soviet bloc, have been indicted by federal prosecutors on charges of conspiracy, making false statements and falsification of records related to allegations that they made outsized campaign donations to Republican causes after receiving millions of dollars originating from Russia.

Additionally, Maddow pointed out, Parnas has sought to testify in the impeachment probe -- although Maddow did not mention the reports of a possible immunity deal to secure his appearance that could save Parnas from prison time.

Democrats were likely to cite the Parnas interview as another reason to have more witnesses testify at the upcoming Senate impeachment trial. But Republicans, already frustrated by the numerous debunked Russia-related stories that were widely reported over the past few years, have said Parnas simply has no credibility left.

Maine Republican Sen. Susan Collins, a moderate and key swing vote, told CNN earlier Wednesday that it was the House's job to find and question witnesses -- and that the new Parnas evidence apparently showed that the Democrats who led the impeachment inquiry in the House had done an "incomplete" job.

Separately, Parnas told Maddow that Trump was contemplating cutting all forms of financial assistance to Ukraine in exchange for an investigation into Joe Biden, not just military aid -- and, Parnas said, the plot had a clear political motivation. (Trump has raised concerns over Biden's recorded 2018 boast of having Ukraine's top prosecutor fired, as well as Hunter Biden's lucrative role on a Ukrainian company's board while his father was directing Ukraine policy as vice president.)

"Yeah, it was all about Joe Biden, Hunter Biden, and also Rudy had a personal thing with the [Paul] Manafort black ledger stuff," Parnas claimed. "But, it was never about corruption, it was strictly about Burisma, which included Hunter Biden and Joe Biden." The so-called "black ledger" purportedly showed millions of dollars from former Ukrainian President Viktor Yanukovych to Manafort, the former Trump campaign chairman.

Parnas said Giuliani told him to deliver a "harsh" message to Ukraine that "all aid" to the country would be halted unless "there was an announcement of the Biden investigation," among other demands.

Parnas added: "Why would President Zelenzkiy's inner circle, or Minister Avakov, or all these people, or President Poroshenko meet with me? Who am I? They were told to meet with me. And that's the secret that they're trying to keep. I was on the ground doing their work."

Parnas told Maddow that Giuliani had informed Ukrainian officials that he represented Trump and had his imprimatur.

"He's drunk the whole time. He wakes up and he's drunk. He starts at 6. I've never seen him not drunk."

Attorney General Bill Barr was "part of the team," and closely involved in Ukraine matters, Parnas said he had surmised, although he did not provide direct evidence. Parnas insisted that it would be impossible to imagine that Barr was not aware of the administration's plotting.

Department of Justice Spokeswoman Kerri Kupec told Fox News on Wednedsay night that the Maddow show had sent the following request for information: "Today, we interviewed Lev Parnas. He told us Attorney General Barr was basically on the same team and best of friends with Rudy Giuliani, Victoria Toensing and Joe DiGenova. He said AG Barr knew, through contact with Rudy Giuliani, about the effort to get the Ukrainians to announce an investigation of Vice President Joe Biden. We welcome any comment you have for us about this."

"A Department of Justice team led by U.S. Attorney John Durham is separately exploring the extent to which a number of countries, including Ukraine, played a role in the counterintelligence investigation directed at the Trump campaign during the 2016 election," the statement continued. "While the Attorney General has yet to contact Ukraine in connection with this investigation, certain Ukrainians who are not members of the government have volunteered information to Mr. Durham, which he is evaluating.”

Elsewhere in the interview, apparently his first on national television, Parnas was unequivocal that former national security adviser John Bolton was "in the loop" on Trump's alleged scheme to obtain the Biden investigation, "100 percent."

Bolton has been suggested as a possible witness in the upcoming Senate impeachment trial, and has said he would be willing to testify.

According to Schiff, Parnas' documents showed that on Oct. 2, 2019, Trump attorney Jay Sekulow told former Trump attorney John Dowd that he had discussed "the issue of representation" with Trump.

Trump responded that he "consents to allowing your representation of Mr. Parnas and Mr. [Igor] Fruman," according to the documents provided by Parnas.

Among the other records Parnas produced were "handwritten notes on stationary from the Ritz-Carlton Hotel in Vienna, Austria," Schiff wrote, including a note that read, "get [Ukrainian President Volodymyr] [Zelensky] to [announce] that the Biden case will Be Investigated; start commun[icating] with Zalensky [sic] without [Pinchuk or Kolomoisky]." An undated photograph of the note was included in the Democrats' documents.

Parnas told Maddow the notes were from a "phone conversation" with Giuliani, and the "main objective" was always to get Zelensky to announce the probe.

The note by itself did not provide a major new revelation, as Giuliani has long acknowledged heading to Ukraine to seek investigations of Joe Biden -- a 2020 presidential candidate -- and other possible corruption in the country. The Trump team strenuously has denied delaying military aid to Ukraine in order to obtain an investigation of Biden specifically, although the White House has argued that endemic corruption is logically and historically considered to be a valid reason to withhold aid.

Later on in the broadcast, Parnas claimed that House Intelligence Committee ranking member Devin Nunes, R-Calif., was "involved" in efforts to get dirt on Biden. Parnas said he had incredulously texted his attorney in disbelief that Nunes was leading the GOP's defense of the president in the House.

Additionally, Parnas claimed to implicate Vice President Mike Pence, saying that Pence wouldn't show up to Zelensky's inauguration unless an investigation was announced.

"The announcement was the key at that time because of the inauguration and I told him Pence would not show up, nobody would show up to his inauguration," Parnas told Maddow. "It was particularly Vice President Mike Pence."

Pence ultimately didn't attend the inauguration because of the dispute over the investigation, Parnas claimed.

At the close of her show Wednesday night, Maddow read aloud a response from Giuliani to Parnas' interview, in which he simply called Parnas a "sad situation."