Lawrence Jones gets an inside look at border security efforts in Laredo, Texas

Fox News contributor Lawrence Jones recently took some flak from critics on social media after posting a photo of himself wearing a bulletproof vest while reporting from the U.S.-Mexico border.

On Thursday night, Jones responded to those critics during an appearance on Fox News' "Hannity."

“They don’t know that the Border Patrol agent that’s standing right here and keeping us safe told me to put it on to keep us safe here,” Jones told host Sean Hannity, referring to the critics. “What people don’t understand is we control this side of the border, but the cartel controls the other side of the border. So there’s been gunfights. I’m going in danger with these Border Patrol agents to report on this story.

"The public doesn’t know," Jones continued, "that over the last two-and-a-half years, there has been an uptick, over 200 percent of violence against these agents. And so in order to do my job, in order for the border agents to do their jobs, I have to come with this vest that they supply.”

Jones reported that the Border Patrol agents he followed caught two Chinese nationals who allegedly paid a drug cartel $15,000 to $20,000 to make the trip toward the border. He added that the agents typically work without backup support, potentially placing themselves at risk if a gunfight breaks out.

“This is why we need the border wall system," Jones said, referring to President Trump's security proposal. "Not only the wall but funding for the technology as well as more boots on the ground in order to help these guys." 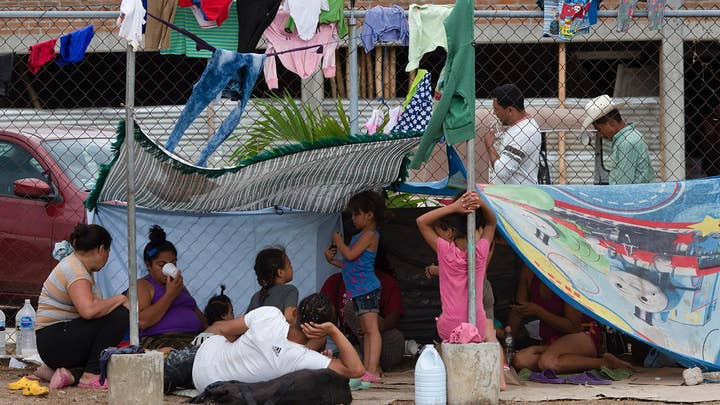 Also part of the panel discussion on "Hannity" was U.S. Rep. Dan Crenshaw, R-Texas, who called on Congress to reform the nation's asylum laws, through which foreign nationals can request entry to the U.S. by claiming political persecution or another form of hardship.

“We should not be accepting asylum in between ports of entry because it’s clearly being taken advantage of," Crenshaw said. "This is the step we have to take on this.

"This would have dramatic effect, by the way," Crenshaw continued. "Drug cartels have complete operational control of the Mexican side of the southern border. They’re making a killing off of this. They ask that people running across pay them money. Those people should not have to pay them money. They should go to the port of entry and actually claim [asylum].”