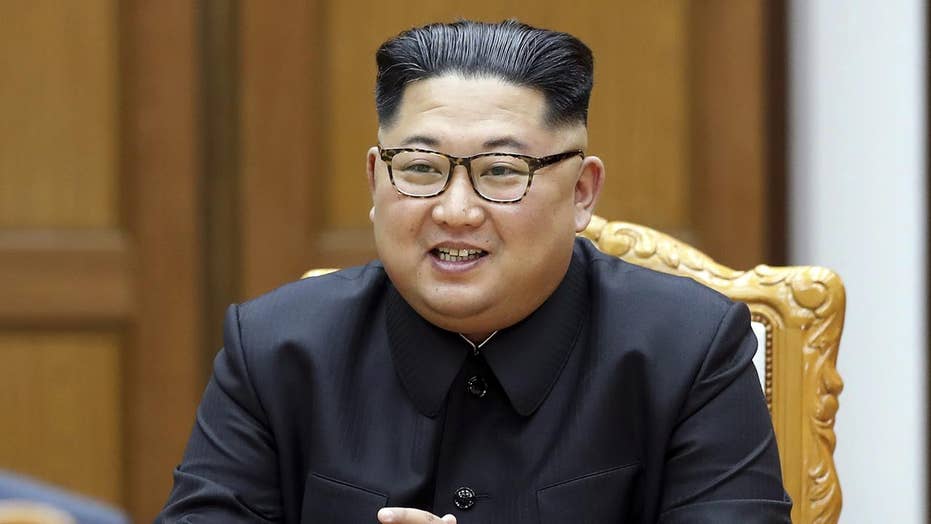 Why is the media attacking Trump's caution with Kim Jong Un?

North Korea is holding up to 120,000 political prisoners in "horrific conditions" in camps across the country, according to estimates from a newly released State Department report.

The findings on North Korea come as the Trump administration is working to engage the isolated regime. The White House says the administration continues to "actively prepare" for a possible summit with Kim Jong Un.

The report, though, addressed the brutal conditions festering inside Kim's kingdom. It revealed 1,304 cases of alleged religious freedom violations in the country last year, while detailing the harsh treatment of political and religious prisoners -- and persecution of Christians.

“The government continued to deal harshly with those who engaged in almost any religious practices through executions, tortures, beatings and arrests,” the report read. “An estimated 80,000 to 120,000 political prisoners, some imprisoned for religious reasons, were believed to be held in the political prison camp system in remote areas under horrific conditions.”

According to the report, Christian Solidarity Worldwide said there was a “policy of guilt by association” applied in cases of detentions of Christians, meaning that the “relatives of Christians were also detained regardless of their beliefs.”

“Religious and human rights groups outside the country continued to provide numerous reports that members of underground churches were arrested, beaten, tortured, and killed because of their religious beliefs,” the report read. “International NGOs and North Korean defectors reported any religious activities conducted outside of those that were state-sanctioned, including praying, singing hymns, and reading the Bible, could lead to severe punishment, including imprisonment in political prison camps.”

The report was released by Secretary of State Mike Pompeo, who underscored the Trump administration’s commitment to “promoting religious freedom around the world.”

“Religious freedom is in the American bloodstream,” Pompeo said at the State Department Tuesday. “The release of the report is critical to our mission to defend religious liberty, and brings to light the state of religious freedom all over the world.”

It's unclear whether the North Korea findings will affect talks over a potential summit between President Trump and Kim Jong Un. Trump last week sent a letter to Kim cancelling a June 12 summit in Singapore following hostile rhetoric from North Korea, but has since re-opened the door to a potential meeting.

This week, Kim dispatched his infamous right-hand man, Kim Yong Chol, to the U.S. amid a diplomatic flurry aimed at salvaging the U.S.-North Korea summit.

Kim Yong Chol is a longtime spy chief and vice chairman of the ruling Workers’ Party, and traveled to New York to meet with officials.

“We have put a great team together for our talks with North Korea. Meetings are currently taking place concerning Summit, and more. Kim Young Chol the Vice Chairman of North Korea, heading now to New York. Solid response to my letter, thank you!” Trump tweeted early Tuesday.

The State Department report also noted that North Korea has “detained foreigners allegedly engaging in religious work within its borders.”

Tony Kim was detained at Pyongyang's airport in April 2017 and accused of unspecified "hostile acts" against the regime. He taught accounting at the Pyongyang University of Science and Technology. In a statement, Kim's family thanked "all of those who have worked toward and contributed to his return home."

Kim Hak Song, an ethnic Korean born in China, was detained in May 2017 for "hostile acts." He worked in agricultural development at an experimental farm run by the Pyongyang University of Science and Technology, which was founded in 2010 with donations from Christian groups.

But another American detainee, Otto Warmbier, died in June 2017 -- just days after he was brought back to the U.S. with severe brain damage. He had been arrested in January 2016, accused of stealing a propaganda poster, and was sentenced to 15 years in prison with hard labor.

Despite the Trump administration's diplomatic efforts toward a denuclearization agreement, the report stated clearly that the U.S. government "does not have diplomatic relations with the DPRK and has no official presence in the country."

The report said that officials used "other mechanisms" to address religious freedom concerns in North Korea.

"The United States cosponsored resolutions adopted by the UN General Assembly and Human Rights Council in March and December that condemned the country’s 'systematic, widespread and gross human rights violations,'" the report said. "The resolutions further expressed grave concern over the country’s denial of the right to freedom of thought, conscience, and religion, as well as of the rights to freedom of opinion, expression, and association, and urged the government to take immediate steps to ensure these rights."