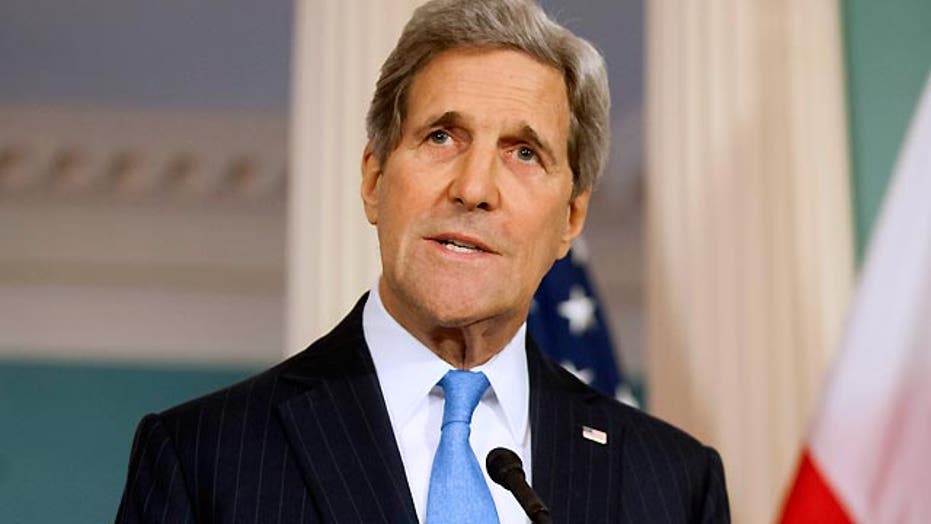 Was Kerry 'cut out of the loop' on Cuba shift?

Aides to Secretary of State John Kerry rejected speculation that America’s top diplomat had been cut out of the loop when the Obama administration negotiated last month’s historic policy shift on Cuba.

“This was a process the secretary was comfortable with,” State Department spokesperson Jen Psaki told reporters at a briefing on Thursday.

Psaki said the White House kept Kerry informed at every stage of the secret negotiations that were held over the course of a year-and-a-half between Cuban emissaries and key officials on the National Security Council. The talks climaxed in coordinated statements by the Castro regime and President Obama last month, announcing prisoner swaps and plans for each country to reopen embassies on the other’s soil, following normalization talks set to commence later this month in Havana.

Speculation that Kerry had been sidelined by back-channel diplomacy conducted directly by the White House first arose after senior administration officials confirmed that two National Security Council officials – deputy national adviser Ben Rhodes and Ricardo  Zuñiga, the NSC’s senior director for the Western Hemisphere – led the series of secret talks with Cuban officials that were held in Canada and at the Vatican, among other locales.

“The reality is that the way this whole thing was negotiated was not exactly out of a textbook,” said David Rothkopf, CEO and editor of the influential magazine and website Foreign Policy, and a supporter of the president’s policy shift. “And while the White House gets credit for keeping some of it secret, the way I understand it is a lot of it was secret from the State Department until just over a week before the deal.”

Sen. Marco Rubio, R-Fla., a Cuban-American lawmaker who sits on the Foreign Relations Committee and has been fiercely critical of the policy shift – arguing that the U.S. failed to extract significant concessions from the Castro regime on its abysmal human rights record – told Fox News the furtive means employed in the Cuba talks helped to produce what he sees as an unsatisfactory outcome.

“It wasn’t State Department officials, it wasn’t [Assistant Secretary of State for Western Hemisphere Affairs] Roberta Jacobson or John Kerry, it was NSC officials,” Rubio said. “You sent unqualified people to negotiate with hardened, brutal spies and representatives of tyrants...It was negotiated at a secretive level involving agencies under the complete control of the White House, as a political move….And that mismatch is apparent in this sort of deal that was made.”

Sen. Robert Menendez, D-N.J., also Cuban-American and until recently the chair of the Foreign Relations committee – and also a vocal critic of the policy shift – bristled at being kept in the dark about the NSC’s “clandestine” talks with Cuban officials. “Whenever I pursued [the subject], either in individual conversation or in questions before the full committee, no one alluded that there were any conversations going on with the Castro regime,” Menendez told Fox News this week.

“One would begin to wonder to what degree the State Department was engaged in all this. Certainly, as someone who is going to continue to have a leadership role on the committee on Senate Foreign Relations, it's going to create a doubt in my mind when State Department witnesses come before the committee. Are they either telling us the entire truth, or are they just shunned out of the process by the White House? Either way, it's going to create some real concerns (over) the veracity of what we're hearing in testimony, as we move forward.”

At the State Department, Psaki maintained that Kerry and his staff were hardly shut out of the back-channel diplomacy. Asked if Rhodes and the NSC had kept the Secretary of State apprised of developments  “at all points along the way in this secret process,” Psaki answered: “Yeah, there have been many discussions behind the scenes about these – the ongoing negotiations.

“It’s important to remember that the national security team works as a team, and there are negotiations the secretary leads, there are negotiations that sometimes the NSC has more of a role on. There are discussions that the Department of Defense leads on. We all work together and play different roles, and there are individuals who also span across different agencies. So this is – this was a process the secretary was comfortable with.”

State Department officials finalized January 21 and 22 as the dates of the first round of normalization talks between the U.S. and Cuba, to be held in Havana and led by Jacobson.

Psaki said it was be unrealistic to imagine that those talks would immediately produce the re-establishment of a U.S. Embassy in Havana. Rather, she made clear, at least another round of talks, if not several, would be required before that could happen.