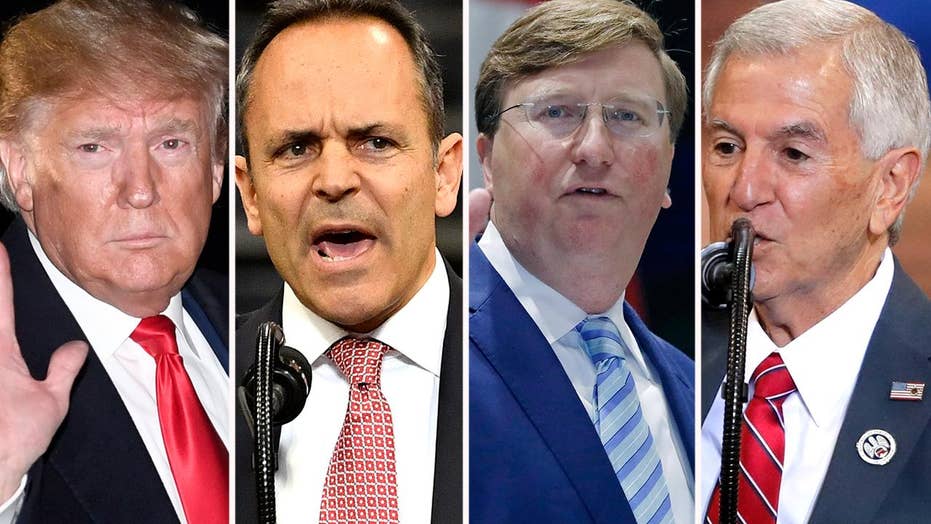 Will Trump influence governor's races in Mississippi, Kentucky and Louisiana?

Republican Daniel Cameron made history Tuesday with his victory over former Kentucky House Speaker Greg Stumbo, becoming the first African-American to be elected the state's attorney general -- and offering a silver lining to the GOP amid drama over the state's gubernatorial race.

Further, Cameron will be the first Republican attorney general in the state in more than 70 years, a significant achievement as GOP Gov. Matt Bevin trails Democrat Andy Beshear in a tight race in which Bevin has not conceded but Democrats have declared victory.

The Trump campaign highlighted Cameron’s win, however, even as it appeared to write off Bevin's chances of prevailing.

“President Trump’s rally helped five of six Kentucky Republicans win clear statewide victories, including Attorney General-elect Daniel Cameron, who will be the first black A.G. in Kentucky history and the first Republican to hold the office since 1948,” Trump campaign manager Brad Parscale said in a statement. “The President just about dragged Gov. Matt Bevin across the finish line, helping him run stronger than expected in what turned into a very close race at the end. A final outcome remains to be seen.”

The president himself supported Cameron, bestowing high praise at a Monday rally in Lexington.

Cameron, 33, has worked in private practice and was legal counsel to Senate Majority Leader Mitch McConnell. He grew up in Kentucky and played football for the University of Louisville.

In his victory speech, Cameron thanked McConnell, R-Ky., who supported his campaign. McConnell faces Democratic opposition in 2020, and one potential opponent, U.S. Marine veteran Amy McGrath, pointed to Beshear’s possible victory as a sign that the long-time senator’s days could be numbered.

“All I have to say is: Mitch, you’re next,” McGrath said in a statement.

Cameron’s win, however, indicates that votes for a Democrat in the Kentucky gubernatorial race do not necessarily mean the state will lean in that direction in other contests.

Trump expressed optimism for his party Wednesday morning, looking to the victories of Cameron and other Kentucky Republicans as a sign that McConnell could remain in office in 2020 and beyond.

"Based on the Kentucky results, Mitch McConnell @senatemajldr will win BIG in Kentucky next year," Trump said.