The New York Times publishes op-ed reportedly written by a senior Trump administration official who claims to be part of a 'resistance'; Kellyanne Conway reacts on 'The Ingraham Angle.'

White House counselor Kellyanne Conway made the rounds of the Sunday talk shows to go after the anonymous writer of an Op-Ed piece in the New York Times last week that slammed President Trump and his administration.

While Conway said she has no idea who is on the list the Trump administration is assembling of possible writers of the Op-Ed piece, she did say the White House has narrowed down the number of culprits and called on the writer to resign from the administration.

Conway’s appearances on the Sunday talk shows comes two days after Trump said he knows “four or five” people who could be the “senior official” behind the article.

“I could think of four or five, mostly people that either I don’t like or don’t respect,” Trump said in an interview with North Dakota television station KVLY on Friday. While he didn’t name names, he predicted that the identity would soon become public and said people think it’s “disgusting” the piece was published.

Citing "national security" as the reason Trump on Friday also called on Attorney General Jeff Sessions to open an investigation into who wrote the opinion piece. He also said he was exploring bringing legal action against the newspaper over publication of the essay two days earlier.

"Jeff should be investigating who the author of that piece was because I really believe it's national security," Trump said. If the person has a high-level security clearance, he said, "I don't want him in those meetings."

A White House official later said Trump's call for a government investigation was an expression of his frustration with the essay, not an order for federal prosecutors to take action.

The Op-Ed, published last Wednesday, describes moves inside the White House to protect the country from President Trump’s “misguided impulses" and said there were “early whispers” of possibly invoking the 25th Amendment to remove Trump from office. 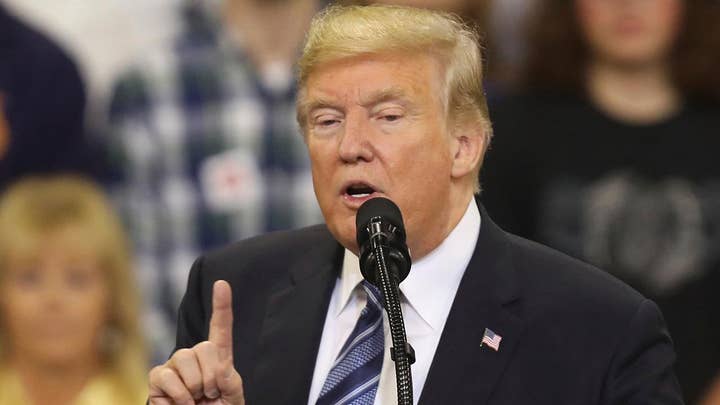 While the author acknowledged the “bright spots” in the administration’s agenda, including deregulation and “historic tax reform,” the piece said that those victories came despite Trump’s leadership style -- described as “impetuous, adversarial, petty and ineffective.”