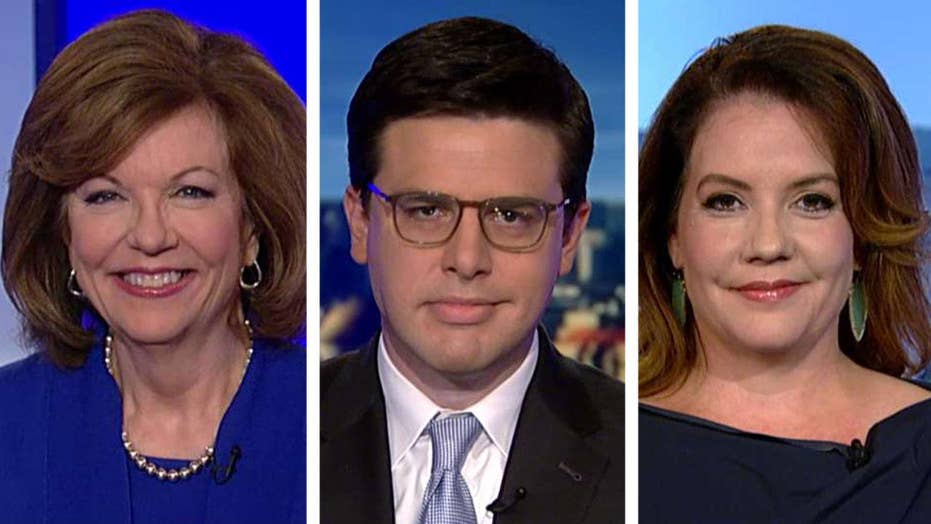 This is a rush transcript from "Special Report with Bret Baier," September 6, 2018. This copy may not be in its final form and may be updated.

VICE PRESIDENT MIKE PENCE: Anyone who would write an anonymous editorial smearing this president who has provided extraordinary leadership to this country, should not be working for this administration. They ought to do the honorable thing and they ought to resign.

SPEAKER OF THE HOUSE PAUL RYAN, R-WIS.: If you not interested in helping the president, you shouldn't work for the president as far as I'm concerned.

HOUSE MINORITY LEADER NANCY PELOSI, D-CALIF.: It probably won't take long for us to find out who wrote it, who has denied it already. I guess by a process of elimination we'll come down to the butler who probably has the most knowledge of the president in the White House. But it is a sad statement.

BRET BAIER, ANCHOR: It is the latest parlor game apparently in Washington, trying to figure out who wrote this anonymous op-ed in The New York Times criticizing the president, saying that they are working on the inside to prevent any bad things from happening. As a 5:30 p.m. this afternoon, 32 administration officials including the vice president put out official denials. We are told that they have been taking to the president to show him who has put out denials.

Did anyone ever really think it was the Federal Trade Commission chairman? Who knows? But we do know that the first lady put out a statement specifically saying, quote, "People with no names are writing our nation's history. Words are important and accusations can lead to severe consequences. If a person is bold enough to accuse people of negative actions, they have a responsibility to publicly stand by their words. And people have the right to be able to defend themselves. To the writer of the op-ed, you are not protecting this country. You are sabotaging it with your cowardly actions."

With that, let's bring back our panel. Mollie?

MOLLIE HEMINGWAY, THE FEDERALIST: This is really an interesting story and there have been a lot of people trying to figure out who is behind it. But at some level it doesn't really matter who wrote it, in part because it might be some midlevel official, but also because it just confirms that there is a never Trump movement within the administration to actively thwart the will of the electorate. When you are engaging in resistance against a president, that means you are engaging in resistance against the people who elected him.

And this is actually a threat to our constitutional republic. This is not how we do things. We believe in political accountability. And admitting on the pages of The New York Times that you have no transparency, no accountability, and you are working to thwart the will of the electorate is something that is the type of norm-breaking that I think a lot of American people don't like.

SUSAN PAGE, USA TODAY: We've never been in a situation where you wake up in the morning and the vice president feels obliged to put out a written statement that he was not the person who wrote the anonymous op-ed piece in The New York Times.

BAIER: And the first lady.

BAIER: Speaking of that, the deep state is a thing talked about all the time. You've heard a lot about it and it's mentioned. Take a listen.

JAMES COMEY, FORMER FBI DIRECTOR: I hear this term "deep state" all the time. There is no deep state. But there is a deep culture and a commitment to the rule of law.

SENATE MINORITY LEADER CHUCK SCHUMER, D-N.Y.: From deep state leaks to unmasking requests, the president and his allies don't quit with all these conspiracy theories, with all these ridiculous fomentations.

PRESIDENT DONALD TRUMP: I was never a deep state guy. Let me tell you, we have got some bad people that are doing bad things.

BAIER: I mean, from the president's point of view, he was right.

MATTHEW CONTINETTI, WASHINGTON FREE BEACON: Right, who are you going to believe, Jim Comey or The New York Times? I do want to speak in defense of the White House butler, though, Bret --

CONTINETTI: Nancy Pelosi just randomly accusing. I know the butlers on the staff, the White House professional staff are better than this.

BAIER: I don't think that qualifies as senior administration.

CONTINETTI: You never know. There is such resume inflation in Washington, D.C., as an editor, and as you know as an anchor, everyone who starts talking to the press on background suddenly becomes a senior administration official. And there are dozens of agencies that this author could work from.

BAIER: How about this, I asked John this earlier: New York Times reporters at the White House, are they trying to peg who this is?

CONTINETTI: That's the second point. The paper's own reporters in position of trying to uncover the identity of the source and the subjects are their own colleagues.

HEMINGWAY: But more than that, it was just a huge strategic blunder of people in the media and people in the resistance to think that this would go over well. You do not have to like Donald Trump to like our constitutional system of governance, and I think it is absolutely time for people to stop enabling and supporting this resistance and thinking about who they are resisting against.

BAIER: Or stand up and say there is a problem and we have to act or something.