While Brett Kavanaugh’s stances on issues like abortion and gun rights could dominate his confirmation hearing, the Supreme Court nominee’s decade-old call to shield presidents from criminal investigation has grabbed his critics' attention right out of the gate.

Kavanaugh, a judge for the federal appeals court in Washington, D.C., tackled the issue in a 2009 article in the Minnesota Law Review.

At the time, he wrote it is “vital that the President be able to focus on his never-ending tasks with as few distractions as possible” and suggested Congress enact a law deferring all civil and criminal suits against a president while in office.

“Congress might consider a law exempting a President—while in office—from criminal prosecution and investigation, including from questioning by criminal prosecutors or defense counsel,” Kavanaugh wrote in the journal. “The indictment and trial of a sitting President, moreover, would cripple the federal government, rendering it unable to function with credibility in either the international or domestic arenas.”

These words have gained new relevance amid the special counsel investigation into Russian meddling and potential collusion with President Trump's 2016 campaign. While the president has denied wrongdoing and blasted the probe all along as a "witch hunt," Democrats seized on the article as another reason to oppose Trump's nominee to replace Justice Anthony Kennedy.

“He has said the president shouldn’t be investigated,” Senate Minority Leader Chuck Schumer, D-N.Y., said of Kavanaugh on MSNBC. “How is he going to react if [Special Counsel Robert] Mueller needs a subpoena, if Mueller needs some other action?”

Sen. Elizabeth Warren, D-Mass., also voiced concern about Kavanaugh’s writing in a tweet Monday night, saying the judge “thinks Presidents like Trump are above the law.” 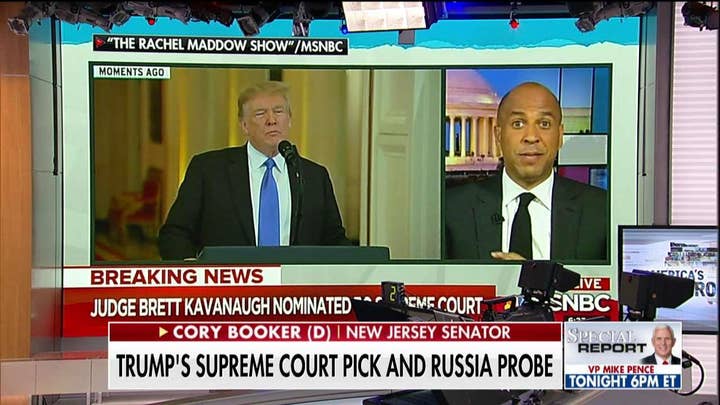 In the article, Kavanaugh did hedge a little by saying that no one in the U.S. is above the law, but added that the Constitution already provides a solution for dealing with a president who breaks the law.

“If the President does something dastardly, the impeachment process is available,” he wrote. “In short, the Constitution establishes a clear mechanism to deter executive malfeasance; we should not burden a sitting President with civil suits, criminal investigations, or criminal prosecutions.”

Earlier in his career in Washington, Kavanaugh joined independent counsel Kenneth Starr's team in investigating President Bill Clinton and co-wrote the report that served as the basis for Clinton’s impeachment. But he later suggested the criminal investigations Clinton faced were bad for the country.

The Trump administration, meanwhile, pushed back on the criticism of Kavanaugh's 2009 article.

A senior administration official said Kavanaugh was merely backing the idea of legislation -- stressing the difference between a legislative opinion and a constitutional opinion. The official said it's fair for senators to ask questions about such things, but it should not be used as a "disqualifier."

Trump lawyer Rudy Giuliani has already said that Mueller has assured Trump's legal team that he will follow longstanding DOJ guidance holding that a U.S. president is off limits for indictment.

This apparently refers to guidance from nearly two decades ago, when the Clinton administration's Justice Department reviewed 1973 guidance that “the indictment and criminal prosecution of a sitting President would unduly interfere” with executive branch duties.

“Judge Kavanaugh is an exceptionally-qualified jurist who will be a fair and impartial arbiter of the law and will not legislate from the bench,” Cornyn said in a statement. “Throughout his tenure, Judge Kavanaugh has served with a high moral standard and demonstrated a clear commitment to faithfully interpreting the Constitution.”