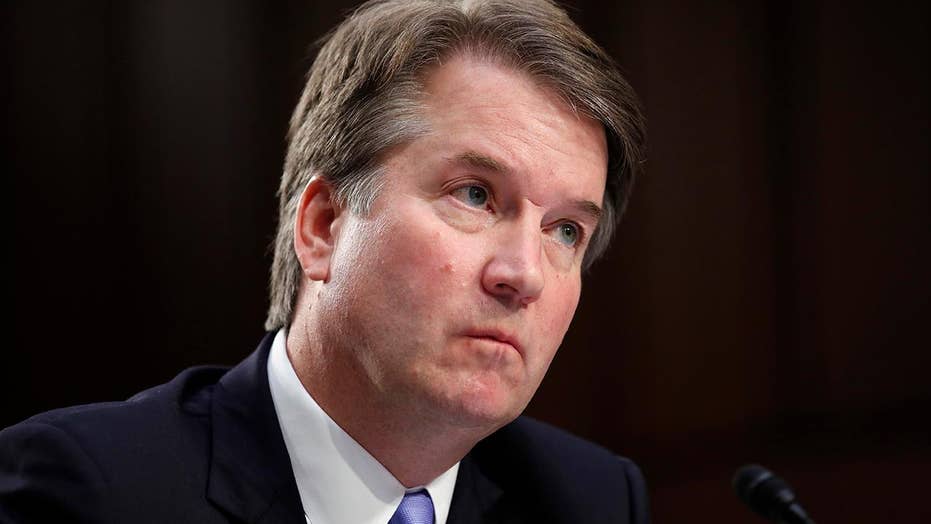 Supreme Court nominee Brett Kavanaugh testifies at his Senate confirmation hearing that he has never given any 'hints, forecasts, previews, winks' about his view of special counsel Robert Mueller's investigation.

Supreme Court nominee Brett Kavanaugh stressed he has not had “inappropriate conversations” with anyone – including those at a law firm founded by one of President Trump’s former personal attorneys – about the ongoing Russia investigation.

Kavanaugh, who was appointed by Trump to fill the vacancy on the Supreme Court earlier this year, got into a particularly combative discussion with Sen. Kamala Harris, D-Calif., late Wednesday night before the end of the second day of his confirmation hearing. Harris asked Kavanaugh whether he had discussed the Russia probe, spearheaded by Special Counsel Robert Mueller, with anyone at the New York law firm Kasowitz Benson Torres.

The firm was founded by Marc Kasowitz, one of Trump’s former personal attorneys.

Kavanaugh told Harris, seen as a potential 2020 presidential contender, he could not specifically recall anyone who works at the firm and said, “I’d like to know the person you’re thinking of.”

“I think you’re thinking of someone and you don’t want to tell us,” Harris retorted.

Republican Sen. Orrin Hatch of Utah brought up the exchange Thursday, asking Kavanaugh to again respond to the questions.

“I haven’t had any inappropriate conversations about that investigation with anyone. I’ve never given anyone any hints, forecasts, previews, winks, nothing about my view as a judge or how I would rule as a judge on that or anything related to that,” Kavanaugh added.

Fox News’ Alex Pappas and Gregg Re contributed to this report.