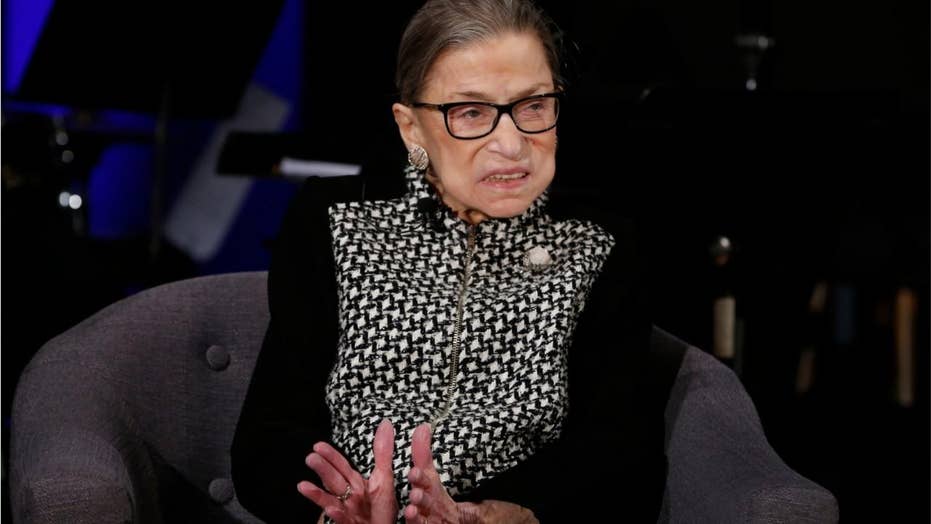 As the highly polarized impeachment trial of President Trump rages on in the Senate, Supreme Court Justice Ruth Bader Ginsburg panned the "dysfunction" and "polarization" at an award ceremony in Washingon.

Though she did not mention impeachment specifically, Ginsburg spoke about the lack of cooperation between the two parties in recent years and reflected on how the collaboration between Republicans and Democrats was much more common when she was confirmed onto the Supreme Court.

"Now we've seen the high degree of polarization in recent years," Ginsburg said at a LBJ Foundation event Thursday. "Yes, that's true… My hope is that someday there will be patriots on both sides of the aisle who are determined to stop the dysfunction we are now experiencing and will decide that their institutional government should work for the benefit of all of the people."

When asked what her fears for the U.S. over the next decade were, she continued: "That is the fear that this polarization will continue, and my greatest hope is that it will end. So you think back to how it was in '93, the person who was my biggest supporter on the Senate Judiciary Committee was not the then-chairman, although the chairman was certainly in my corner; it was then-Senator Biden. But my greatest supporter was Orrin Hatch of Utah. And, Strom Thurmond gave me a supply of Strom Thurmond key chains, which has lasted until last year."

Ginsburg's comments came on the same day that Sen. Elizabeth Warren, D-Mass. seemingly undermined her colleague Chief Justice John Roberts in a question she submitted for him to read during the impeachment trial.

"At a time when large majorities of Americans have lost faith in government, does the fact that the chief justice is presiding over an impeachment trial in which Republican senators have thus far refused to allow witnesses or evidence contribute to the loss of legitimacy of the chief justice, the Supreme Court, and the Constitution?" Roberts read from the card handed to him by the clerk before shooting a visibly irritated look in what appeared to be Warren's direction.

In contrast to the partisan votes and charged rhetoric from both sides in the impeachment trial, Ginsburg described the "civility" on the Supreme Court.

"It is the most collegial place I have ever worked. One symbol of it is every day before we sit to hear cases, and every day before we confer on cases, we go around the conference room, each justice shakes hands with every other," she said. "And that's the way of saying ‘Yes, you circulated a pretty spicy dissent yesterday' ... but we're all in this together and we know that the institution we serve is ever so much more important than our individual egos. So to make it work, we have to not just tolerate but genuinely appreciate each other."

Ginsburg has made similar comments in the past. Last year, for example, she defended the two most junior justices of the Supreme Court, Trump-appointees Brett Kavanaugh and Neil Gorsuch, at a forum hosted by Duke Law School.

‘Yes, you circulated a pretty spicy dissent yesterday ... but we're all in this together and we know that the institution we serve is ever so much more important than our individual egos. So to make it work, we have to not just tolerate but genuinely appreciate each other'

At an hourlong question-and-answer session, Duke Law professor Neil Siegel lamented that "nominees for the Supreme Court are not chosen primarily anymore for independence, legal ability, personal decency, and I wonder if that’s a loss for all of us."

Ginsburg shot back, "My two newest colleagues are very decent, very smart individuals." The exchange was first reported by The National Review.