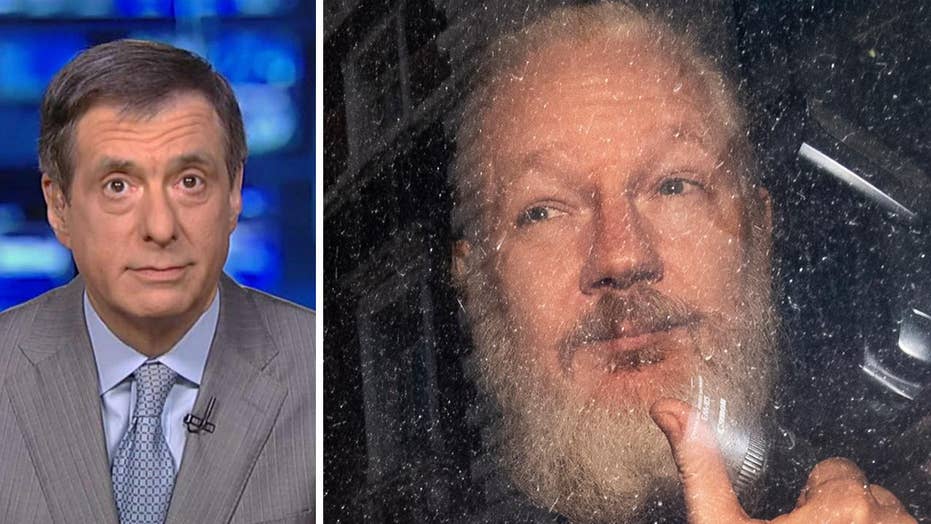 Howard Kurtz: How right and left shifted their views of the WikiLeaks founder

The images were stunning as we saw Julian Assange led away from his sanctuary of nearly seven years, looking haggard and disoriented with a Santa Claus beard.

And moments after British police took him from the Ecuadorean embassy, the media debate erupted.

Is this a fugitive from justice, a man who damaged America, which he detests, by releasing classified files about our troops?

Trump offers no opinion on WikiLeaks or Julian Assange

Or is this a man functioning as a digital-age journalist, as his lawyers contend, who was blowing the whistle under the banner of press freedom?

I don't know how the legal case will shake out, or even whether U.K. authorities will extradite Assange to the U.S. But I do know this: Conservatives and liberals, at different times, have embraced Assange depending on his targets.

His abrupt arrest, once Ecuador got fed up with harboring him, was tied to a sealed indictment brought last year by the Trump Justice Department.

That was rooted in the document dump that the Wikileaks founder orchestrated back in 2010. The group teamed up with an Army private, Bradley Manning (now Chelsea Manning), who was sentenced to 35 years for leaking classified files.

Prosecutors say Assange agreed to help Manning solve a password on a Pentagon computer that allowed access to classified documents, and encouraged Manning to keep digging for information.

WHERE'S THE CAT ASSANGE KEPT AT ECUADORAN EMBASSY IN LONDON?

The leaks exposed abuse of detainees by the Iraqi military and higher-than-reported civilian death tolls in Iraq, as well as 250,000 diplomatic cables from U.S. embassies that included sensitive talks that embarrassed the country. A military judge convicted Manning of aiding the enemy.

When Barack Obama, overruling his Pentagon chief, commuted Manning's sentence after nearly seven years — this following a couple of suicide attempts — many liberal commentators approved of the move. But Paul Ryan called it "outrageous," and John McCain said Manning had engaged in "espionage" and put American troops at risk. (As president, Trump retweeted a message slamming Obama for "pardoning a traitor.")

But Republican attitudes toward Wikileaks flipped during 2016, when the group, accused by U.S. officials of working with Russia, hacked into a treasure trove of Democratic emails.

While Nancy Pelosi called the hacking an "electronic Watergate," candidate Trump at various times said: "Wikileaks has provided things that are unbelievable" about Hillary Clinton. "Boy, that Wikileaks has done a job on her, hasn't it?" "Wikileaks, some new stuff, some brutal stuff." And: "I love Wikileaks."

The president was a bit less effusive yesterday. He deflected reporters' questions on the arrest, saying, "I know nothing about Wikileaks. It's not my thing."

So Assange, once hated by the right and defended by the left, went through a metamorphosis when he was damaging the Hillary campaign — an all-too-vivid example of Washington's fickle loyalties.

Assange's lawyer played the media card yesterday, telling reporters that "this precedent means that any journalist can be extradited for prosecution in the United States for having published truthful information about the United States ... Publishing of documents, of videos of killings of innocent civilians, exposure of war crimes — this is journalism."

While the case might have legal implications for legitimate reporters who publish classified material — and typically withhold documents that could endanger lives, sources and methods — Assange is an activist who cares nothing for American national security. Instead, he is using journalism as a fig leaf for his reckless conduct.