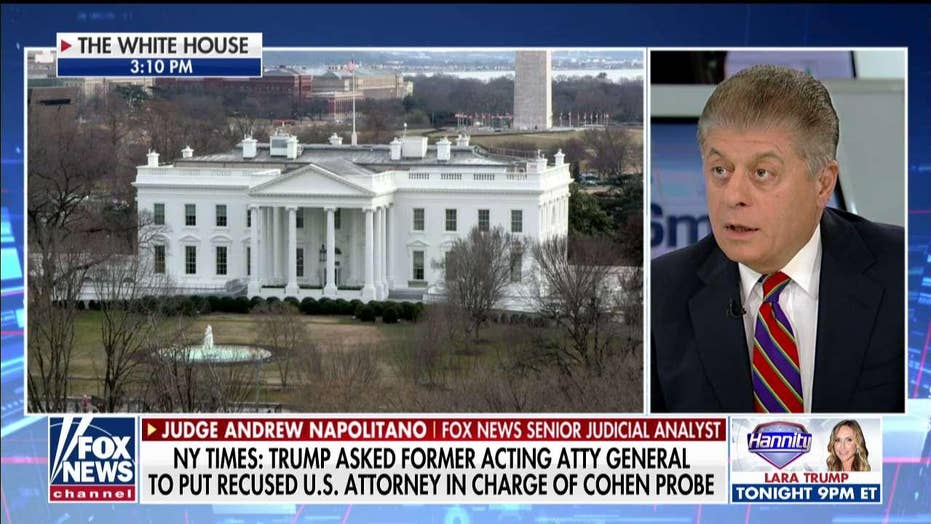 Fox News judicial analyst Judge Andrew Napolitano on Tuesday considered a New York Times report that claimed President Trump tried to interfere in an investigation into his former personal attorney Michael Cohen, and the analyst said if the report is accurate Trump could be implicated in attempted obstruction.

The New York Times report claims that Trump called Acting Attorney General Matthew Whitaker last year to ask if Geoffrey S. Berman, the United States attorney for the Southern District of New York and a Trump ally, could be put in charge of the investigation into Cohen.

Berman, who was appointed by Trump, has recused himself from the Cohen investigation. In December, Cohen was sentenced to three years in prison after pleading guilty to numerous crimes while cooperating with federal prosecutors.

"If the Times reporting is accurate, the phone call would be evidence of what?" Fox News anchor Shepard Smith asked.

"Corrupt intent," Napolitano replied. "That is an effort to use the levers of power of the government for a corrupt purpose: to deflect an investigation into himself or his allies."

Rudy Giuliani, Trump's lawyer, told Fox News in a statement, "The President said today he had no such conversation with the Acting AG and I believe Mr. Whitaker issued a statement to the same effect. The rest of the piece is just a regurgitation of previously refuted obstruction theories. They all fail as obstruction because as Professor Dershowitz’s recent book and many other authorities make clear all of the alleged actions were within the President’s sole discretion under Article II of the US Constitution."

“If you try to interfere with a criminal prosecution that may knock at your own door by putting your ally in there, that is clearly an attempt to obstruct justice," Napolitano said. “Where it goes from here, I don’t know. But I tell you who is reading it as we speak: Bob Mueller and team.”