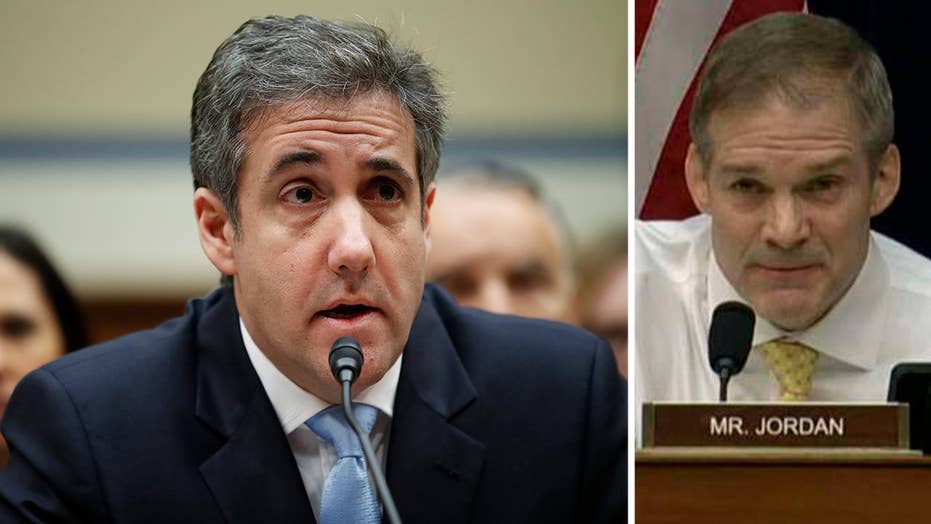 Rep. Jim Jordan, the top Republican on the House Oversight Committee, blasted Michael Cohen as an “admitted liar” on Thursday over new revelations that raised questions about the veracity of last week's testimony to Congress -- and challenged committee Chairman Elijah Cummings to back calls for a Justice Department review of the former Trump attorney’s statements.

Jordan, R-Ohio, who last week sent a referral to Attorney General William Barr seeking a probe of Cohen’s testimony, urged Cummings, D-Md., to support the efforts after Cohen’s lawyer admitted he once “directed his attorney” to ask about a possible presidential pardon last year -- despite testifying he never sought a pardon.

He added: “It is my hope and expectation that the Chairman will join our call for the Justice Department to look into the veracity of several of Mr. Cohen’s statements.”

On Thursday, during a separate committee hearing, Jordan also challenged Cummings to conduct a review of the transcript of Cohen’s testimony.

Cummings responded that he is a “deliberate” person and would go through the transcript. A spokesperson for Cummings did not immediately respond to Fox News’ request for comment on when that review would take place.

"I have never asked for, nor would I accept, a pardon from Mr. Trump," Cohen said, under oath, last week.

But Cohen's lawyer Lanny Davis acknowledged in a statement that his client, early on, "was open to the ongoing 'dangling' of a possible pardon by Trump representatives privately and in the media."

The statement went on: "During that time period, he directed his attorney to explore possibilities of a pardon at one point with Trump lawyer Rudy Giuliani as well as other lawyers advising President Trump. But after July 2, 2018, Mr. Cohen authorized me as a new lawyer to say publicly Mr. Cohen would never accept a pardon from President Trump even if offered. That continues to be the case. And his statement at the Oversight Hearing was true — and consistent with his post joint defense agreement commitment to tell the truth.”

Cohen pleaded guilty to making false statements to Congress during a Senate committee appearance in August 2017. He is going to jail for a range of offenses, including the false statements charge.

“We write to refer significant evidence that Michael D. Cohen committed perjury and knowingly made false statements during his testimony before an Oversight and Reform Committee hearing,” they wrote to Barr. “While testifying under oath, Mr. Cohen made what appear to be numerous willfully and intentionally false statements of material fact contradicted by the record established by the Justice Department in United States v. Cohen.”

Davis, though, has defended his client for testifying “truthfully” before the committee.

It is unclear whether the Justice Department has started a review of Cohen’s testimony.