FDNY firefighters on Jon Stewart 9/11 hearing on The Story

FDNY firefighters on Jon Stewart 9/11 hearing on The Story

A hero firefighter who responded to the World Trade Center on 9/11 pushed back on concerns over the fiscal impact of funding victims' compensation.

Firefighter Frank Licata praised comedian Jon Stewart's statements before a House subcommittee and told Martha MacCallum on "The Story" any distress over budgetary impacts is unfounded.

"The other thing we heard, unfortunately, yesterday was the dollar amount - that we have a $22 trillion deficit at this time and going forward, 'who pays for it?' and 'how will they pay for it?'," Licata said.

He and the other first responders joining MacCallum Wednesday agreed with retired FDNY firefighter Patrick Heffernan, who said Stewart "did a great job." 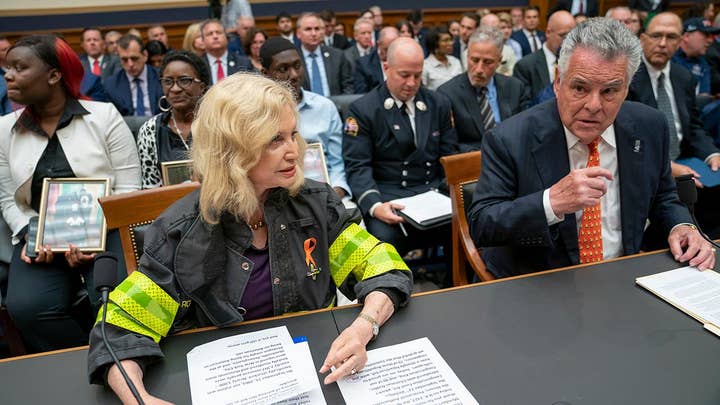 Stewart blasted lawmakers who skipped the hearing, calling the event, "an embarrassment to the country and it is a stain on this institution" of Congress.

Licata added concerns about fraud within the program are also unfounded.

He pointed to his own father, who worked in Lower Manhattan and was diagnosed with several forms of cancer in the years following the terror attack.

The firefighter said his father delayed applying to the fund, but encountered many safeguards against fraud during the application process.

"He never felt like he should have been a part of it because he always felt as me being a first responder it was for me," Licata said.

"The hoops that he had to jump through, and deservedly so, to verify everything that he has gone through. So I think people worrying about fraud is misleading because it's so difficult. You would have to have so many moving parts involved to make fraudulent claims."