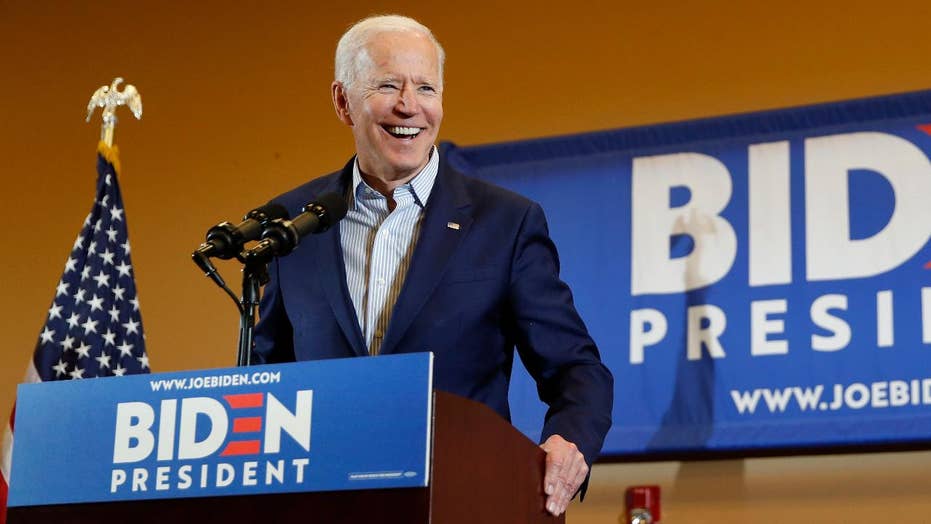 Supporter to Biden: You can hug and kiss me anytime

Former Vice President Joe Biden responds to a supporter shouting that he can hug and kiss her anytime while speaking at a campaign rally in Nevada.

Former Vice President Joe Biden on Tuesday was seemingly embarrassed after a rallygoer joked about some of his most recent controversies.

Speaking at a campaign rally in Nevada, a supporter shouted at Biden: "You can hug and kiss me anytime, Joe!"

JILL BIDEN: JOE HAS CHANGED, KNOWS TO 'BACK OFF AND GIVE PEOPLE SPACE'

The 2020 contender smiled and looked out into the crowd, before laughing. Biden then did the sign of the cross and said, "That's very nice, thank you."

The supporter's remark came shortly after he took the stage to applause. Biden told the crowd they should expect him to work hard as he vies for the Democratic presidential nomination.

Multiple women in recent months have accused the former vice president of touching them inappropriately at events.

Writer D.J. Hill alleged that at a 2012 fundraising event in Minneapolis, Biden put his hand on her shoulder, then dropped it down her back in a way that made her "very uncomfortable" while Hill and her husband posed for pictures with him.

In another incident, former college student Caitlyn Caruso claimed Biden put his hand on her thigh and hugged her for "just a little bit too long" at an event on sexual assault at the University of Nevada at Las Vegas.

Biden responded to the allegations of misconduct in a video posted to social media. He said that "social norms are changing," and he's "heard what these women are saying."

"Politics to me has always been about making connections, but I will be more mindful about respecting personal space in the future," Biden said. "That's my responsibility and I will meet it."