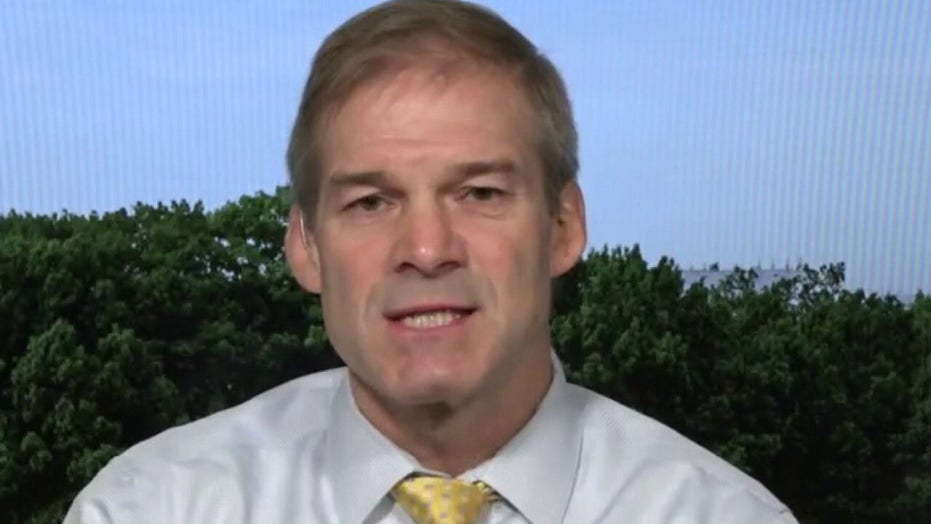 Rep. Jordan sounds off on Democrats' treatment of AG Barr at House hearing

Rep. Jim Jordan, the top Republican on the House Judiciary Committee, said on "Fox & Friends" Wednesday morning that Democrats cut off a video he showed during his opening statement at a Tuesday hearing with Attorney General William Barr before it ended.

"They pulled the plug on the video?" host Steve Doocy asked.

"Yeah, it wasn't all the way through. We had more to show. They wouldn't let him answer the questions. And there was a point where they weren't even going to let him take a restroom break," Jordan responded.

The House Judiciary GOP posted the full video on its Twitter account Tuesday after the opening statement by Jordan. A comparison between the video posted by the Judiciary Committee Republicans and the tape from the hearing shows that the 10-minute video was cut off about two minutes before its conclusion.

In that time, the video shows a woman holding a sign that says, "Good Cops Quit" while rioters smash the windows of an Amazon store in the background, then a person yelling at the individual filming to "put your phone down!" It then shows a cardboard police officer wearing a Klan hood being burned in effigy while a person holds a "Black Lives Matter" sign nearby and others loudly cheer the burning.

There is also film of a 7-Eleven being looted, fires being burning and other stores being looted for big-ticket items, including an 85-inch Sony television.

The video, according to House Judiciary Committee Chairman Jerrold Nadler, D-N.Y., was out of order. He said they had not provided adequate notice that they were going to play it and criticized its length.

"I hope that Mr. Jordan will never complain about the length of my opening statement," Nadler said after Jordan's video was cut off. "I am going to insert the committee's audio-visual policy into the record of this hearing. And note that the minority did not give the committee the 48-hour notice required by that policy."

BARR DINGS NADLER AFTER SPARRING OVER WHETHER TO TAKE HEARING BREAK

As racially charged protests have swept the nation in recent months following the death of George Floyd in the custody of the Minneapolis Police Department, for which one officer was charged with murder and three others charged as accessories, the Trump administration's handling of such protests has come under scrutiny. Democrats, including Nadler himself, challenged Barr Tuesday on how his department has dealt with the protests, many of which have turned into violent riots, especially those outside of a federal courthouse in Portland that has essentially been under siege for months.

"[U]nder your leadership, the department has endangered Americans and violated their constitutional rights by flooding federal law enforcement into the streets of American cities, against the wishes of the state and local leaders of those cities, to forcefully and unconstitutionally suppress dissent," Nadler said in his opening statement. In Portland specifically, the city banned its police from working with federal law enforcement.

But Barr, later in the hearing, responded to the criticism of the use of federal law enforcement to defend the Portland courthouse.

"Federal courts are under attack. Since when is it OK to burn down a federal court?" Barr said.

He continued: "If someone went down the street to the Prettyman Court here, that beautiful courthouse we have right at the bottom of the hill and started breaking windows and firing industrial-grade fireworks in to start a fire, throw kerosene balloons in and start fires in the court, is that OK? Is that OK now? No, the U.S. Marshals have a duty to stop that and defend the courthouse, and that’s what we are doing in Portland. We are at the courthouse, defending the courthouse."