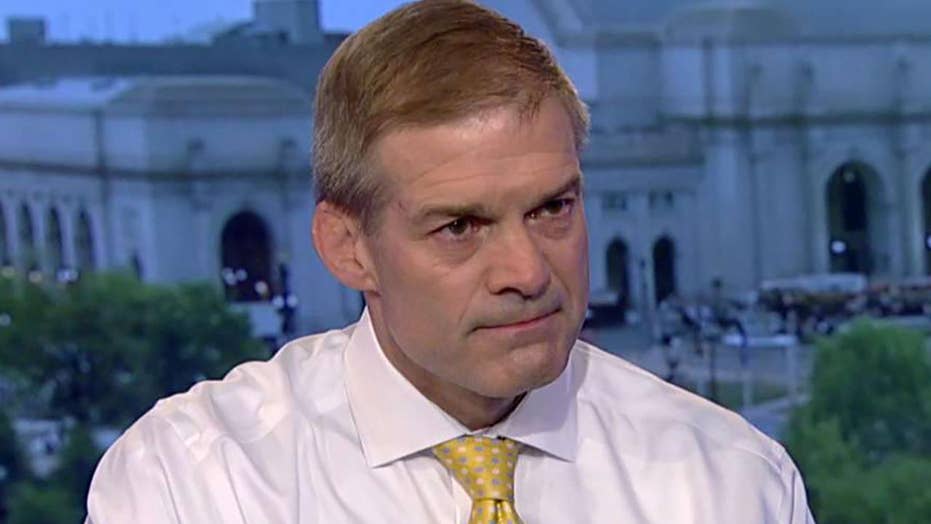 Republican congressman denies knowledge of alleged sexual abuse by Ohio State University's former wrestling team doctor when he was an assistant coach and says he would have acted if claims had been brought to his attention.

Rep. Jim Jordan, R-Ohio, hit back Friday against claims he ignored sexual abuse while he coached wrestling at Ohio State University, telling Fox News that the allegations are “bogus.”

Speaking with Brett Baier in an exclusive interview on “Special Report,” Jordan said the claims were untrue. “I never saw, never heard of, never told of any kind of abuse," he maintained. "We would’ve dealt with it if we knew of anything that happened.”

Male athletes from 14 sports at Ohio State have reported alleged sexual misconduct by Richard Strauss, who was on the faculty and medical staff and published a variety of research. Strauss died in 2005, in what was ruled a suicide.

Jordan was the assistant wrestling coach at Ohio State between 1986 and 1994. Strauss worked as the team doctor from the mid-1970s to the late 1990s.

Accusers say Rep. Jim Jordan turned a blind eye to allegations of sexual abuse by the team doctor while he was an assistant wrestling coach at Ohio State University more than 20 years ago; chief congressional correspondent Mike Emanuel reports from Washington.

Jordan, a notable wrestler at the University of Wisconsin before becoming a coach at Ohio State, knew when he was at the university that Strauss was groping male wrestlers, said ex-wrestlers Mike DiSabato and Dunyasha Yetts. At least five wrestlers, in total, have made similar claims.

Ohio State has not released details about the claims but said more than 150 former students and witnesses have been interviewed so far. The university has urged anyone with information about Strauss to contact the independent investigators from Seattle-based law firm Perkins Coie.

The law firm has claimed it sent numerous emails to Jordan but never received a reply. Jordan denied receiving the emails and, according to his spokesperson, they were sent to a nonexistent address.

"Congressman Jordan never saw any abuse, never heard about any abuse, and never had any abuse reported to him during his time as a coach at Ohio State," spokesman Ian Fury told Fox News earlier this week.

But DiSabato told Fox News that Jordan's response to his claims has been "disappointing.”

“The position he took was staggering at best,” DiSabato said. “He chose to double down. Triple down.”

U.S. Capitol Police are reviewing emails sent to Jordan by DiSabato, some of which date back to March. Sources tell Fox News that Jordan previously forwarded the emails to Chief of Staff Kevin Eichinger and Jordan's attorney. However, an email sent from DiSabato at 4:30 a.m. Wednesday was "the last straw" and prompted Jordan to alert Capitol Police.

One of the emails, obtained by Fox News, refers to Jordan as "Reverend James – the 'squeaky clean' US Congressman from Urbana, who does not recall systemic sex abuse and has never heard agent orange tell a lie and wants to be speaker of the house despite his apparent lack of knowledge of the systemic sex abuse…."

On Friday evening, Jordan continued to defend himself.

“I know they know what they’re saying is not accurate," he insisted. "It’s just not accurate. There never was abuse reported to me and if there was I would’ve dealt with it.”

A founder of the conservative Freedom Caucus, Jordan is one of the most powerful Republicans in Congress and a potential contender for House speaker after Paul Ryan steps down from the position.

He's taken leading roles in fighting the Affordable Care Act, and in pushing back against the government's investigation of Russian meddling in the 2016 elections, most recently by aggressively interrogating Deputy Attorney General Rod Rosenstein in committee.

That prominent position, the representative argued, could factor into the recent allegations.

“I think the timing is suspect when you think about how this whole story came together after the Rosenstein hearing and the speakers race,” he said. “But it is just not accurate.”

At times visibly upset during the Friday interview, Jordan said he'd had an emotional week following the marriage of one of his children and the death of his nephew in a car accident.

“What has been said about me is completely false," he continued. "We’re going to get the truth out. It’s been an emotional week. All types of Americans have to deal with tough things but this is wrong. It’s just wrong.”