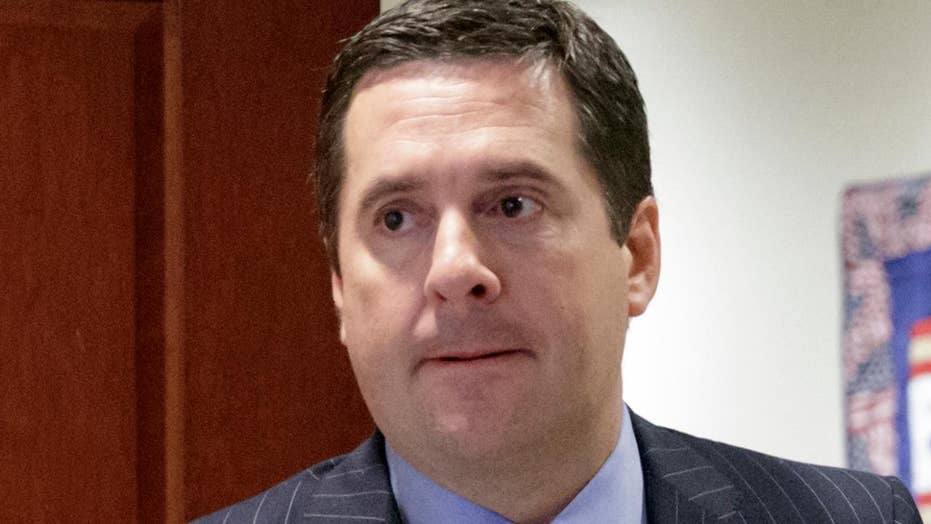 New details on the intel Nunes viewed at the White House

Adam Housley has the details

The U.S. intelligence official who “unmasked,” or exposed, the names of multiple private citizens affiliated with the Trump team is someone “very well known, very high up, very senior in the intelligence world,” a source told Fox News on Friday.

Intelligence and House sources with direct knowledge of the disclosure of classified names told Fox News that House Intelligence Committee Chairman Devin Nunes, R-Calif., now knows who is responsible -- and that person is not in the FBI.

For a private citizen to be “unmasked,” or named, in an intelligence report is extremely rare. Typically, the American is a suspect in a crime, is in danger or has to be named to explain the context of the report.

“The main issue in this case, is not only the unmasking of these names of private citizens, but the spreading of these names for political purposes that have nothing to do with national security or an investigation into Russia’s interference in the U.S. election,” a congressional source close to the investigation told Fox News.

The unmasking of Americans whose communications apparently were caught up in surveillance under the Obama administration is a key part of an investigation being led by Nunes, who has come under fire from Democrats for focusing on that aspect.

Nunes has known about the unmasking controversy since January, when two sources in the intelligence community approached him. The sources told Nunes who was responsible and at least one of the Trump team names that was unmasked. They also gave him serial numbers of reports that documented the activity.

This was long before Trump sent out his now-infamous March 4 tweets claiming then-President Barack Obama “wiretapped” Trump Tower during the 2016 election.

Nunes had asked intelligence agencies to see the reports in question, but was stonewalled.

He eventually was able to view them, but there was only one safe place to see the documents without compromising the sources’ identities -- the old executive office building on White House grounds, which has a Sensitive Compartmented Information Facility (SCIF) required to view classified or top secret reports. The White House did not tell Nunes about the existence of the intelligence reports, but did help him gain access to the documents at his request, the source said.

The White House, meanwhile, is urging Nunes and his colleagues to keep pursuing what improper surveillance and leaks may have occurred before Trump took office. They’ve been emboldened in the wake of March 2 comments from former Obama administration official Evelyn Farkas, who on MSNBC suggested her former colleagues tried to gather material on Trump team contacts with Russia.

White House Press Secretary Sean Spicer said Friday her comments and other reports raise “serious” concerns about whether there was an “organized and widespread effort by the Obama administration to use and leak highly sensitive intelligence information for political purposes.”

Farkas parted ways with the White House in 2015 and defended herself on Twitter, saying she didn’t personally “give anybody anything except advice” on Russia information and wanted Congress to ask for facts.

The communications collected from Trump team associates apparently were picked up during surveillance of foreign targets. But an intelligence source familiar with those targets said they were spied on long before Trump became the GOP presidential nominee in mid-July.

In addition, citizens affiliated with Trump’s team who were unmasked were not associated with any intelligence about Russia or other foreign intelligence, sources confirmed. The initial unmasking led to other surveillance, which led to other private citizens being wrongly unmasked, sources said.

"Unmasking is not unprecedented, but unmasking for political purposes ... specifically of Trump transition team members ... is highly suspect and questionable,” an intelligence source told Fox News. “Opposition by some in the intelligence agencies who were very connected to the Obama and Clinton teams was strong. After Trump was elected, they decided they were going to ruin his presidency by picking them off one by one."

Nunes first revealed on March 22 in a press conference that the U.S. intelligence community “incidentally collected” information on Trump’s transition team, putting the information and names into various intelligence reports. His committee had been investigating whether Russia interfered in the U.S. election as well as how names of private citizens from these reports were leaked.

House Intelligence Ranking Member Adam Schiff, D-Calif., criticized Nunes for his handling of the investigation, claiming he should never have briefed Trump. Nunes apologized the following day, but said he briefed the president because the information he found was not related to Russia.

The minority members on the House Intelligence Committee were expected to visit a National Security Agency facility on Friday to view the same reports Nunes has seen, an intelligence source told Fox News.