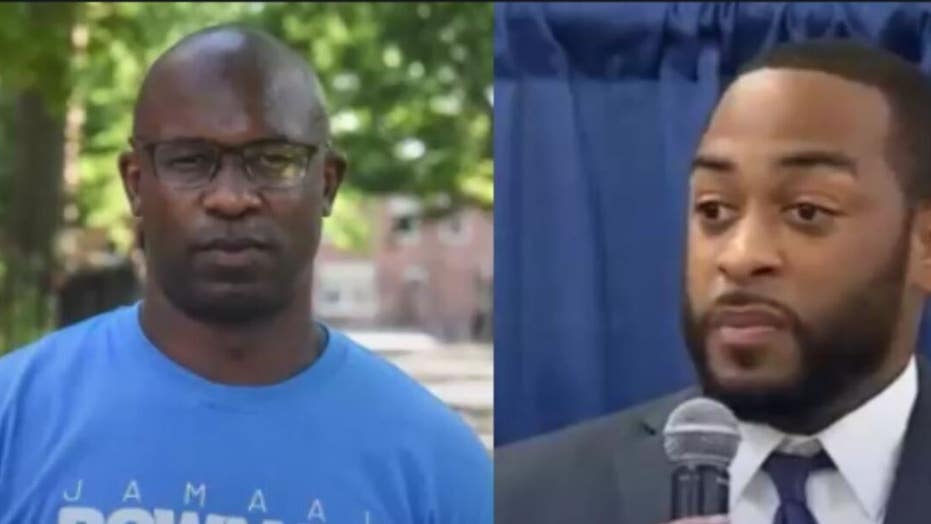 Jamaal Bowman and Charles Booker were boosted in recent weeks after landing endorsements from the biggest names on the left. Both are battling establisment-backed Democrats and have shots at an upset win.

The progressive wing of the Democratic Party hasn’t had much to celebrate at the ballot box since populist Sen. Bernie Sanders suspended his presidential campaign two-and-a-half months ago.

But the left appears to be storming back, giving more moderate Democratic candidates some serious competition in newly competitive primaries in Kentucky and New York, two of the states holding contests on Tuesday.

WHAT TO WATCH FOR IN THE JUNE 23 PRIMARIES

The premier showdowns grabbing the national spotlight are the Democratic Senate primary in Kentucky, where establishment-backed Amy McGrath – who had been the heavy favorite and enjoyed a massive fundraising advantage – is facing a serious threat from progressive candidate and state Rep. Charles Booker.

The other big contest is in New York, where longtime Democratic Rep. Eliot Engel is fighting for his political life against liberal challenger Jamaal Bowman.

Both Bowman and Booker were boosted in recent weeks after landing endorsements from the biggest names on the left – Sanders, Sen. Elizabeth Warren of Massachusetts, and first-term Rep. Alexandria Ocasio-Cortez of New York. Fox News confirmed that Sanders has raised $750,000 for Booker, Bowman and the other progressive candidates he’s backing in Tuesday’s primaries.

And the surge for both candidates – who are black and facing white opponents– comes amid a time of nationwide protests over police brutality against minorities and systemic racism.

Here are the key races to watch:

National Democrats have long looked to McGrath as their best hope to finally topple Senate Majority Leader Mitch McConnell, who’s up for re-election this year.

The former U.S. Marine fighter pilot hauled in a whopping $11.3 million the past three months, outraising McConnell in the second quarter of fundraising. And with a massive campaign war chest of $19 million as of the start of June, she topped the top Senate Republican when it comes to cash on hand.

But McGrath’s no longer the sure bet to win her own party’s primary, as Booker’s soared at just the right time.

“Let’s bring it home. From the Hood to the Holler. It’s time for the PEOPLE to win,” Booker tweeted as the polls in Kentucky opened.

The nationwide unrest sparked by George Floyd’s death – as well as the death of Breonna Taylor, a 26-year-old African-American emergency medical technician who was fatally shot by Louisville Metro Police Department officers in March – has shined a light on Booker, who lives in Louisville.

“With everything that’s gripped the country the past few weeks, it could be turning things on its head,” said Jessica Taylor of the Cook Report, a leading nonpartisan political handicapper.

While McGrath enjoys a large fundraising and structural advantage, Taylor noted that the current climate “seems tailor-made to a candidate like Booker. … He has been able to seize the moment and speak to the moment.”

Democratic strategist Michael Ceraso – a veteran of the 2016 Sanders campaign and Pete Buttigieg’s 2020 White House bid – highlighted that, “if Kentucky voters pick a progressive to challenge McConnell, it’s because the implications of a national movement, COVID, and President Trump swayed them. A candidate is best served when they can turn an endorsement into campaign money that grabs media and grassroots attention on and offline.”

Voting stations are set up for the primary election at the Kentucky Exposition Center, Monday, June 22, 2020, in Louisville, Ky. (AP Photo/Piper Blackburn)

Turnout could end up being the crucial factor in the primary – which was originally scheduled for May but postponed due to health concerns over in-person voting amid the coronavirus pandemic. With all voters eligible to vote by absentee ballot, extensive early voting by mail may mean that Booker’s last-minute surge comes too late to make a difference at the ballot box.

There are also concerns over in-person turnout because there are fewer than 200 polling stations open statewide on Tuesday – including just one in the Louisville area, the state’s largest city and Booker’s base.

The left is hoping Tuesday’s the end of the line for Engel, who's served in Congress for more than three decades and currently represents New York’s 16th Congressional District, which encompasses parts of the New York City borough of the Bronx and portions of neighboring southern Westchester County.

Engel – the powerful chairman of the House Foreign Relations Committee – has come under attack for spending more time at his home in Potomac, Md., than at his apartment in the Bronx. And recently he was put on the defensive after he was captured on a live microphone suggesting that “if I didn’t have a primary, I wouldn’t care” about speaking at an event.

Bowman, a former middle school principal, is surging in the polls thanks to the attention and support he’s received in recent weeks.

“Let’s make history,” he tweeted as he headed out to vote on Tuesday morning.

If he succeeds, his victory will be compared to Ocasio-Cortez’s ousting of Crowley.

But Engel's getting a helping hand as he fights for re-election, landing endorsements from former senator from New York and 2016 Democratic presidential nominee Hillary Clinton, some top House Democrats, and the political wing of the Congressional Black Caucus.

Other opportunities for progressives

Jones is being backed by the progressive group Democracy for America, which also endorsed Bowman and Booker.

“Progressives have already won by simply being in contention in all these races and we’ll be ecstatic if we get a straight out victory in any one of them,” noted Democracy for American communications director Neil Sroka.

He added that “winning all three would be like finding out you’d won the lottery, while you nabbed a royal flush on the river card just after hitting the jackpot on the slots.”

Wins on Tuesday would give the left a big boost. While they’ve enjoyed a handful of successes in primaries so far this year – think Marie Newman toppling conservative Democratic Rep. Dan Lipinski in Illinois and Kara Eastman’s primary win in Nebraska’s 2nd Congressional District – they’ve come up short in many other races.

Democratic Reps. Yvette Clarke and Carolyn Maloney are both facing primary challenges. But the New York City congresswoman who’s grabbing the most headlines is Ocasio-Cortez.

Challenger and former CNBC anchor Michelle Caruso-Cabrera has raised over $2 million for her bid to unseat Ocasio-Cortez, thanks in part to help from the U.S. Chamber of Commerce and other pro-business groups. But in the race for campaign cash, she remains far behind Ocasio-Cortez, who’s built a massive war chest thanks to grassroots progressive support.

GOP state Sen. Chris Jacobs is favored over Democrat Nate McMurray – who came within 1,100 votes of toppling Collins in 2018. But the Buffalo-area district was won by President Trump by a whopping 25 percentage points four years ago.

And in North Carolina, there’s a Republican primary runoff in the race to succeed White House Chief of Staff Mark Meadows in the state's 11th Congressional District. Trump-endorsed Lynda Bennett is facing off against Madison Cawthorn, a charismatic former Meadows staffer. Bennett earned 23 percent of the vote in the March 3 Republican primary. Cawthorn came in a close second with 20 percent, sending the contest to a runoff because no candidate got 30 percent of the initial primary vote.