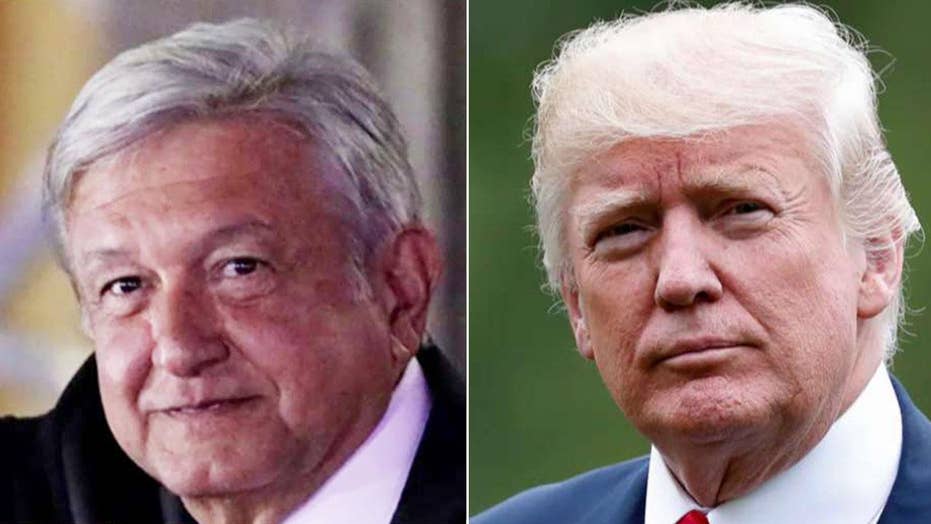 Reports on Saturday said the Trump administration had struck a tentative deal with Mexico’s incoming government to require all asylum-seekers from south of the border to wait in Mexico while their asylum claims go through court.

But by early evening, the picture grew more complex, as the incoming Mexican government said there was "no agreement of any sort."

The Washington Post, citing Mexican officials and senior members of president-elect Andrés Manuel López Obrador’s transition team, reported early Saturday that the Remain in Mexico plan would require asylum applicants to stay in Mexico, therefore ending the “catch-and-release” practice whereby those seeking asylum are allowed to stay in the U.S. while their claims are being processed. This is one of several options the Trump administration has been pursuing in negotiations for months.

Implementation of such a policy would mark a significant victory for President Trump, whose tough immigration stance -- including his promises to end catch-and-release and build a wall -- has formed a central part of his political platform both before and after his election.

The Wall Street Journal, in its own report on the agreement, said it strives to control how many migrants are allowed to stay on the American side of the border during the asylum process.

The White House did not comment on the reported deal on Saturday. “President Trump has developed a strong relationship with the incoming Obrador Administration, and we look forward to working with them on a wide range of issues,” Deputy Press Secretary Hogan Gidley told Fox News.

Trump did turn to Twitter on Saturday evening to discuss the migrant matter, vowing that those at the U.S.-Mexico border wouldn't be permitted into America "until their claims are individually approved in court."

"We only will allow those who come into our Country legally. Other than that our very strong policy is Catch and Detain. No 'Releasing' into the U.S," he tweeted. "All will stay in Mexico. If for any reason it becomes necessary, we will CLOSE our Southern Border. There is no way that the United States will, after decades of abuse, put up with this costly and dangerous situation anymore!"

But according to The Associated Press, the new Mexican leadership was telling a somewhat different story.

"There is no agreement of any sort between the incoming Mexican government and the U.S. government," future Interior Minister Olga Sanchez said in a statement. That ran contrary to The Post's account of the agreement with the incoming administration of Andres Manuel Lopez Obrador, who takes office Dec. 1.

The Post had also quoted Sanchez as saying, "For now, we have agreed to this policy of Remain in Mexico."

Sanchez, in her statement to AP, did not explain why The Post had quoted her affirming the existence of an agreement.

Stephanie Leutert, director of the Mexico Security Initiative at the University of Texas at Austin, told AP the Remain in Mexico plan is part of a strategy to take away the ability of migrants to live and work in the U.S. while cases are processed. "The hope is that asylum seekers will not want to live in (Mexico) for months/years and won't come," Leutert said via Twitter.

Trump has been battling with international pressure, a tight control of the Senate, and significant judicial pushback over a number of his immigration policies.

This week a federal judge in San Francisco barred the administration from refusing asylum to those who cross the southern border illegally, after the White House said that anyone crossing illegally would be declared ineligible for asylum.

The deal appeared to be coming at a time when Trump has set his sights on the latest migrant caravan to travel through Honduras and Guatemala toward the U.S. southern border. He has expressed determination to stop the caravan from reaching the U.S., deploying troops to the border and warning of consequences should countries assist the caravan in its journey.

It was not clear at press time what the policy implications of this latest disagreement on an asylum-seeker deal might be.