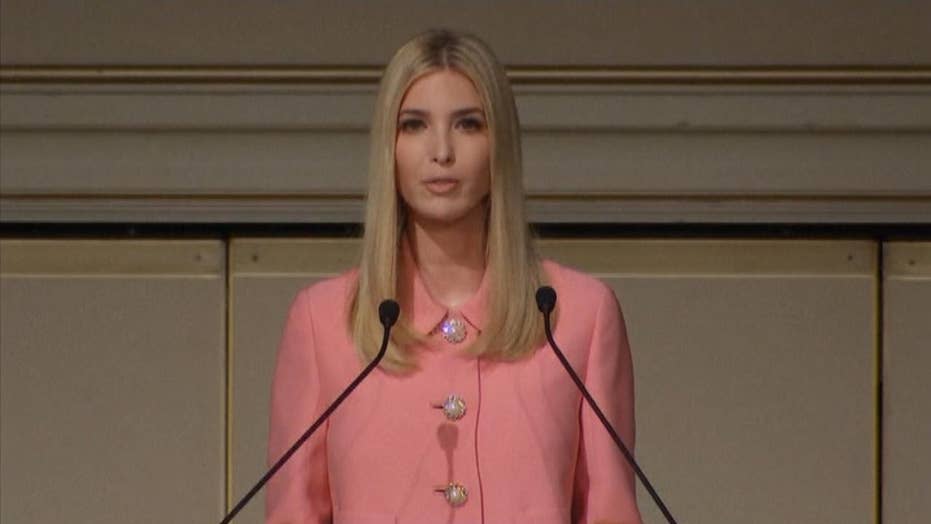 Ahead of President Trump’s trip to Asia, Ivanka Trump delivered remarks at the World Assembly for Women Summit in Tokyo. She addressed the need to empower women, spoke out against sexual harassment and stressed the importance of family care.

Advocating for women has been a signature project for Ivanka Trump since President Donald Trump took office more than nine months ago.

On Friday in Tokyo -- ahead of her father's upcoming Asia trip -- that meant advocating for women and minorities in the working world and speaking out against sexual harassment.

The first daughter used her appearance at the World Assembly for Women summit to champion female and minority contributions in the fields of science, technology, engineering and math (STEM).

“Female and minority participation in STEM fields is moving in the wrong direction," Ivanka Trump said, according to Reuters. "We must create equal participation in these traditionally male-dominated sectors of our economy."

But she also addressed the torrent of sexual harassment and misconduct allegations back home, involving figures from business, media, entertainment and government.

"All too often, our workplace culture fails to treat women with appropriate respect," she told her Japanese audience about American society, Agence France-Presse reported. "This takes many forms, including harassment, which can never be tolerated."

Ivanka's speech came just days before President Trump and first lady Melania Trump were scheduled to arrive in Japan for a three-day visit beginning Sunday. The tour also will include stops in South Korea, China, Vietnam and the Philippines.

In her speech, Ivanka also touted her father’s push at home for tax reform, Reuters reported.

“We are seeking to simplify the tax code, lower rates, expand the child tax credit, eliminate the marriage penalty, and put more money back in the pockets of hard-working Americans,” she said.

Ivanka's Tokyo appearance put significant distance between herself and a report by Newsweek that she had used a private email account to communicate with the U.S. Treasury Department while employed by the White House.

The magazine cited information obtained via a Freedom of Information Act (FOIA) request made by nonprofit organization American Oversight.

During the 2016 presidential campaign, Donald Trump consistently criticized opponent Hillary Clinton’s use of a private email server while she was U.S. secretary of state with the Obama administration.