Freshman Rep. Ilhan Omar faced a bipartisan wave of criticism this week, including a remarkable rebuke from House Democratic leadership, for weekend tweets deemed anti-Semitic – but this is hardly the first time she's made controversial comments about Israel.

The uproar that gripped Capitol Hill Monday began after she suggested pro-Israel members of Congress are simply motivated by funding from the American Israel Public Affairs Committee (AIPAC). House Speaker Nancy Pelosi and other leaders urged Omar to apologize for using “anti-Semitic tropes and prejudicial accusations about Israel's supporters.” Omar eventually apologized but reiterated “the problematic role of lobbyists in our politics.”

But while the AIPAC comments generated the most headlines, Omar has made numerous controversial comments ever since she got involved in activism and politics.

Prior to becoming a congresswoman, Omar was a local Somali-American activist in Minnesota. Unrestrained by the decorum of any elected office, she previously lashed out against Israel using what many regard as an anti-Semitic trope.

“Israel has hypnotized the world, may Allah awaken the people and help them see the evil doings of Israel,” she tweeted in 2012.

Only last month, seven years after she wrote the tweet, Omar addressed the comment, saying, “Those unfortunate words were the only words I could think about expressing at that moment,” referring to Israel’s November 2012 operation against Hamas in Gaza.

Omar came under fire once again last year for doing a flip-flop after her election victory on whether she supports the BDS (Boycott, Divestment, Sanctions) movement against the Jewish state.

During the campaign, she told a group of Jewish voters in her home state that the boycott of Israel was “counteractive” and “not helpful in getting that two-state solution” – an indication she was against the BDS movement at the time.

Shortly after her election victory, she came out unequivocally in support of the boycott movement. “Ilhan believes in and supports the BDS movement, and has fought to make sure people’s right to support it isn’t criminalized,” her campaign told MuslimGirl publication. 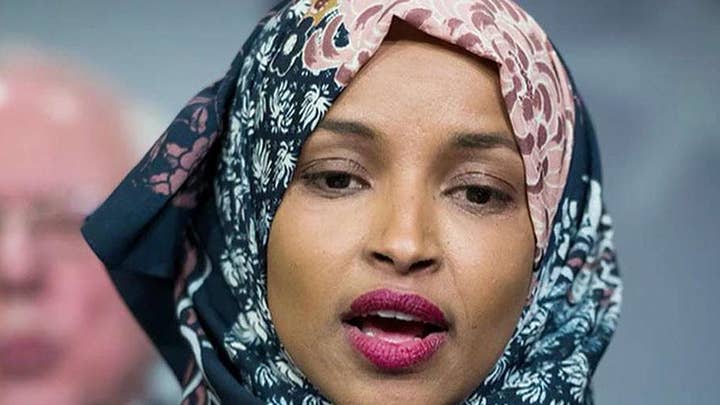 More recently, she compared Israel to Iran and said she “almost chuckle[s]” when the Jewish state is described as a democracy.

“I mean just our relationship with the Israeli government and the Israeli state. And so when I see Israel institute laws that recognize it as a Jewish state and does not recognize the other religions that are living in it,” she said during an interview, when asked to explain her comments claiming the Israelis are prioritized by the U.S.

Following the backlash to her comments, she doubled down on her remarks and retweeted another commentator who wrote online that current-day Israel is much like the U.S. South was during segregation.

In 2013, Omar described acts of terrorism as a reaction to “our involvement in other people’s affairs,” in the wake of the brutal al-Shabab attack on a Kenyan shopping mall that killed nearly 70 people and wounded another 200.

She added: “Usually most people want to not look internal and see what [about] their actions that makes another react. For us, it’s always ‘I must have not done anything. Why is it happening to me?’ Nobody wants to take accountability of how these are byproducts of the actions of our involvement in other people’s affairs.”

Fast forward to 2016, Omar – then a Minnesota state representative – went on to ask a judge to show leniency toward a group of Minnesota men accused of trying to join the Islamic State terror group.

“Incarcerating 20-year-old men for 30 or 40 years is essentially a life sentence. Society will have no expectations of the to-be 50- or 60-year-old released prisoners; it will view them with distrust and revulsion.”

One of the accused men, Abdirahman Yasin Daud, was facing over 30 years in prison for trying to join the terrorist group. He admitted in court that he wasn’t trying to enter Syria on humanitarian grounds, but rather to participate in the activities of ISIS.

Daud went on to be sentenced to 30 years in prison after he was found guilty of trying to provide material support to ISIS and conspiring to commit murder overseas.

The condemnation came after she tweeted that Graham was “compromised.” Omar was responding to a video that suggested Graham pivoted from being a Trump critic to one of the president's biggest supporters in the Senate.

Harmeet K. Dhillon, a national committeewoman for the Republican National Committee, slammed Omar’s comment: “Breathtaking bigotry, homophobia from a member of Congress. It's not funny, and puzzling why Dems get away with outdated stereotypes and dumb conspiracy theories like this.”

Less than a week later, Omar came under fire again – this time for piling on the Covington Catholic High School students, even as video footage already challenged accusations that the students harassed a Native American elder.

“The boys were protesting a woman's right to choose & yelled 'it's not rape if you enjoy it' ... They were taunting 5 Black men before they surrounded Phillips and led racist chants ... Sandmann's family hired a right wing PR firm to write his non-apology,” Omar wrote, before deleting the tweet after the uproar.

Many other social media users pointed out that the “5 Black men” Omar claimed were taunted by the students were actually members of the notorious Black Hebrew Israelite group that made multiple anti-white and anti-LGBT comments toward students.

While Republicans are calling to strip Omar of her seat at the House Foreign Affairs Committee due to anti-Israel remarks, Omar also raised eyebrows after comments on the socialist regime of Venezuela.

She accused President Trump of backing a “coup” in the socialist-led country of Venezuela even as Nicolas Maduro’s government lost legitimacy in the eyes of the international community.

“A US backed coup in Venezuela is not a solution to the dire issues they face,” Omar tweeted. “Trump’s efforts to install a far right opposition will only incite violence and further destabilize the region. We Must support Mexico, Uruguay, & the Vatican’s efforts to facilitate a peaceful dialogue.”

Her comments came as the U.S. and other countries recognized Juan Guaido, the opposition head of the National Assembly, as the interim president of Venezuela. Maduro was elected last year in a vote widely seen as fraudulent.