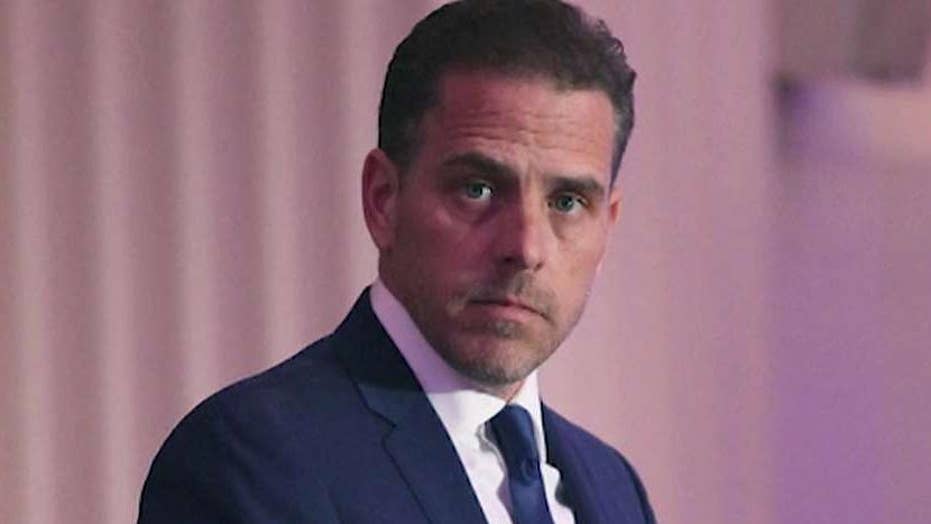 Could President Trump could make a scandal out of Hunter Biden's Ukraine connection in the same way he did with Hillary Clinton's emails; reaction from Fox News politics editor Chris Stirewalt.

Hunter Biden, the son of presidential candidate Joe Biden, is the "biological and legal father" of a child he fathered with an ex-stripper, an Arkansas judge ruled Tuesday, contradicting the younger Biden's previous denials that he had any role in the pregnancy.

In an order establishing paternity, Independence County, Ark., Circuit Judge Holly Meyer noted that the results of DNA tests indicated Biden was the father "with near scientific certainty," and instructed the Arkansas Department of Health to issue a birth certificate listing Biden as the father of 29-year-old Lunden Alexis Roberts' child.

Roberts, who The New York Post reported was a stripper at a Washington, D.C., club that Biden patronized, received "primary physical and legal custody" of the child. In previous filings, Roberts told the court that Hunter Biden "had no involvement in the child's life since the child's birth, never interacted with the child, never parented the child," and "could not identify the child out of a photo lineup."

Biden “shall have visitation with the child as agreed between the parties,” Judge Meyer ruled.

The next hearing in the case is now set for Jan. 29 at 9:30 a.m. ET, to address "temporary child support for the minor child and other matters," the judge wrote, adding that the parties have until Jan. 16 to comply with all "pending discovery" which is currently "past due." Another hearing is set for the morning of March 13 to handle any remaining discovery issues, with a final hearing on May 13 to set "permanent child support for the minor child."

In a separate order, Meyer also dismissed attempts by a private investigation firm D&A Investigations to join the case, saying the company's pleadings were frivolous and that future attempts might incur a contempt citation.

D&A claimed Biden was the subject of multiple criminal investigations and had been involved in a $156 million counterfeiting scheme, which Biden's legal team said were transparently false attempts to get media attention. Additionally, D&A said it had linked Biden to an identity-theft scheme, but provided no evidence -- and, the firm didn't explain why its filings were relevant to the paternity case.

Still, the paternity disputed has presented headaches for the elder Biden ever since a court filing showed that DNA results indicated he was now a grandfather. Joe Biden tangled with a Fox News reporter on camera when asked about that development in November.

Hunter Biden's personal indiscretions, including his past drug use, have taken center stage in recent months. Republicans have argued the younger Biden was a drug-addicted, irresponsible playboy, and that he secured his lucrative overseas business roles not because of his own competence, but because he could sell access to his father.

Hunter Biden reportedly is expecting a child with his wife, Melissa Cohen Biden, whom he married this past May.