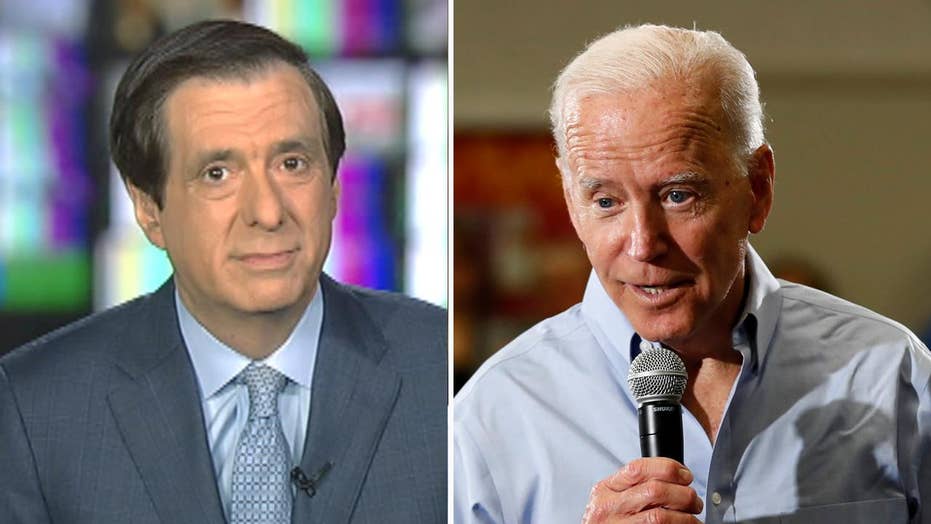 Howard Kurtz: Eventual Democratic nominee will be battered and bruised by election

'MediaBuzz' host Howard Kurtz weighs in on the new Quinnipiac Poll that puts President Trump losing to many of the Democratic candidates in a national election match.

The media, which are always enamored of polls, are really loving them right now.

That's because they show President Trump getting his butt kicked.

And while the latest numbers certainly aren't good for the president, I'm going to flash a giant yellow warning light here.

It's early, as everyone knows, but the problems run deeper than that.

The pundits are agog over a new Quinnipiac University survey that shows Joe Biden clobbering Trump, 53 to 40 percent.

The Q poll is widely respected, but here's the thing:

If Joe or Bernie or Kamala or one of the others is up against Trump in November of 2020, he or she is not going to be seen by the public as the same person as during the current campaign spring training period.

The eventual nominee will have endured a year and a half of denunciations by Trump, his campaign, his allies, and his surrogates. That's along with millions of dollars in negative advertising by pro-Trump and independent groups and constant attacks from conservatives in the media.

In short, the person on the ballot will be fairly battered and bloodied.

And the Republicans have no monopoly on this. The Obama camp, the Democrats and liberals in the media pounded Mitt Romney, long before he became the nominee, as a heartless executive, flip-flopper and goofball.

Now by this logic, Trump will also be more scuffed up by the fall of 2020 than he is now. But that will be nothing new. He's been pounded by the press and his opponents since the last campaign, and while he'll have to defend his record, all the personal controversies — his business record, women, hush money — are pretty well known.

By contrast, no Democrat running, including Biden, has been through the searing scrutiny of running at the top of the ticket. So the race will tighten. Nobody is going to win by 13 points.

Meanwhile, Trump tried to push back hard on a New York Times piece which said: "After being briefed on a devastating 17-state poll conducted by his campaign pollster, Tony Fabrizio, Mr. Trump told aides to deny that his internal polling showed him trailing Mr. Biden in many of the states he needs to win."

Politico had reported earlier that the polling showed Biden ahead of Trump in Pennsylvania, Michigan and Wisconsin.

The president never explicitly denied the Times account. But when asked by a reporter yesterday, he said "there were some fake polls" put out by "the corrupt media ... We have some internal polling, very little, and it's very strong."

Was he denying that the Fabrizio polls were "devastating"?

Or was he going after other surveys, such as the much-touted Quinnipiac poll? It wasn't clear.

If it's the latter, the university said that it stands by its numbers after 25 years of independent polling.

"We're used to this," Quinnipiac said. "Whoever is on the wrong side in a poll attacks the poll."

Counselor to the president Kellyanne Conway gives an update on 'Fox &amp; Friends' on the crisis at the border and reacts to House Democrats holding hearings on Trump obstruction and collusion claims.

"When the president says we have some of the best numbers we ever had," the White House counselor said, "he means among Republicans and he also means among some of the individuals who voted for him last time."

Obviously, it will take more than just winning Republicans for Trump to get to 270.

Conway added that when "the president says he has the best numbers ever, he is also talking about the unemployment numbers, growth numbers, the optimism numbers."

For all the back and forth, it's clear that an incumbent president who's not higher than 42 percent has his work cut out for him.

But the latest polls are more than ephemeral. They reflect a political landscape that may be radically changed once people start voting.