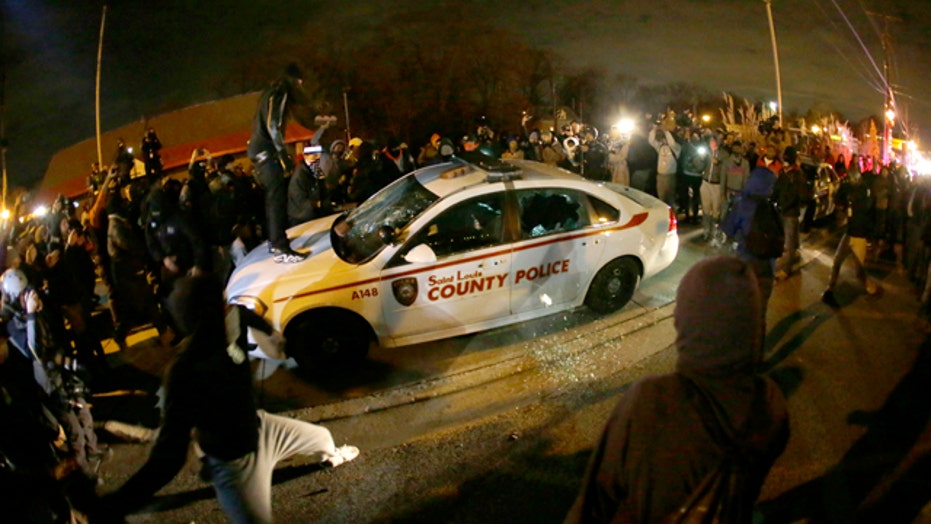 Media to blame for violence in Ferguson?

A look at the narrative of situation

It was a split-screen spectacle, the president of the United States appealing for calm while Ferguson was starting to erupt in flames.

As Obama was saying “there is inevitably going to be some negative reaction, and it will make for good TV,” the images of tear gas and looting were competing for attention.

I don’t know that anything the president said at that point could have deterred the protestors and agitators after no indictment was returned, and here’s why: They were reacting to a media narrative that hardened into cement soon after the tragedy. And we now know that narrative was filled with misinformation.

We now know that some eyewitnesses changed their stories, or admitted they never actually saw the shooting.

But their accounts echoed across the media landscape, that Darren Wilson shot Michael Brown in the back, that Brown had his hands up, that he was trying to surrender.

“The most significant challenge encountered in this  investigation has been the 24 hour news cycle, and its insatiable appetite for something for anything to talk about,” he said. “Following closely behind were non-stop rumors on social media.”

Now the media faced a major handicap in what became a one-sided story. Brown’s parents, understandably grief-stricken, were talking to sympathetic interviewers. Brown’s friends and allies were supporting him. And we had nothing from Wilson or the Ferguson Police Department.

For reasons I still don’t understand, they never put out even a rudimentary statement describing Wilson’s version of events.

The media didn’t know, until word leaked fairly late in the process, that Brown had scuffled with Wilson while the officer was in his police car, that two shots were fired, and that Wilson’s face was swollen from the confrontation. (The Washington Post and FoxNews.com erroneously reported that Wilson’s eye socket had been fractured.)

Without that information, with alleged eyewitnesses saying things that hadn’t been tested before a grand jury, the media had a fragmentary picture at best. We didn’t even know that Wilson had fired 12 shots during the tragic encounter.

But something else was at work as well. A white officer killing an unarmed black kid, a majority white police force deemed insensitive to a minority community, these are racially charged themes that the mainstream media often embrace. And while these are longstanding problems in America, it doesn't mean that every officer in every such situation is guilty.

At the same time, the initial riots in Ferguson boosted the story into a stratosphere even beyond that of Trayvon Martin. The media paratroopers invaded the Missouri suburb for the nightly clashes, their cameras drawing outside troublemakers, exacerbating the tensions and, of course, lifting ratings. (Monday’s rioting, which saw correspondents facing tear gas and rocks, is a reminder that covering such tinderbox events is risky business.)

Finally, we’ve learned the grand jury findings, that the preponderance of shows Wilson didn’t shoot Brown in the back and that he was afraid of the much bigger man he said looked like a "demon." Wilson told ABC’s George Stephanopoulos that he wouldn’t have done anything differently and was worried Brown "would kill me." That doesn’t make him a hero, and I still wonder why he couldn’t have ended the confrontation without killing the man.

But it’s also clear that some commentators could not care less about the grand jury evidence, that they consider anything less than an indictment to be a miscarriage of justice. They are clinging to the original media narrative, which turns out to have been badly flawed.