EXCLUSIVE: House Republicans are requesting that FBI Director Christopher Wray hold a briefing on Rep. Eric Swalwell’s, D-Calif., past ties to an alleged Chinese spy -- asking that lawmakers be informed of the "full extent" of Chinese targeting members of Congress.

"As our nation faces a growing security threat from the Chinese Communist Party’s (CCP) attempts to infiltrate and undermine the United States Government, we write to request a full briefing regarding counterintelligence threats to Members of Congress, including information related to Rep. Eric Swalwell’s ties to a suspected Chinese intelligence operative," says the letter from 14 House Republicans, including Rep. Dan Bishop, R-N.C. and Homeland Security Committee Ranking Member John Katko, R-N.Y.

The concern about Swalwell originated in December, when Axios reported that a Chinese national named Fang Fang or Christine Fang had targeted up-and-coming local politicians, including those who had the potential to become national figures.

As part of that effort, Fang reportedly took part in fundraising for Swalwell’s 2014 reelection campaign -- although she did not make donations nor was there evidence of illegal contributions.

Fang’s earliest known engagement with Swalwell occurred through the Chinese Student Association, Axios reported, and by 2014, she had developed "close ties" to Swalwell’s office. Fang is also reported to have placed at least one intern in Swalwell’s office and interacted with him at multiple events over several years.

According to the outlet, investigators became so alarmed by Fang’s behavior and activities that they alerted Swalwell in 2015 to their concerns, and gave him a "defensive briefing." Swalwell then cut off all ties with Fang and has not been accused of any wrongdoing, an official said.

In a statement to the outlet, Swalwell’s office said: "Rep. Swalwell, long ago, provided information about this person — whom he met more than eight years ago, and whom he hasn’t seen in nearly six years — to the FBI. To protect information that might be classified, he will not participate in your story."

"I’ve been a critic of the president. I’ve spoken out against him. I was on both committees that worked to impeach him," Swalwell said. "The timing feels like that should be looked at."

MCCARTHY: ANYONE WHO HEARD WHAT FBI TOLD ME 'WOULD NEVER ALLOW SWALWELL TO BE ON THE INTEL COMMITTEE'

"What it appears though that this person -- as the story reports -- was unsuccessful in whatever they were trying to do," he said. "But if intelligence officials are trying to weaponize someone’s cooperation, they are essentially seeking to do what this person was not able to do, which is to try and discredit someone."

But Republicans have continued to express concern about the connection. The lawmakers noted Swalwell’s position on committees such as the House Homeland Security Committee, where lawmakers are given access to classified information. 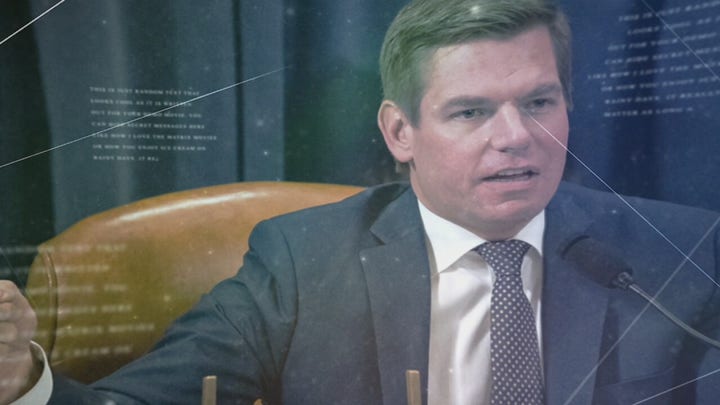 "This includes information classified as Top Secret, which by its very nature ‘could reasonably be expected to cause exceptionally grave damage to the national security’ if subject to unauthorized disclosure," they write.

They said a Dec. 18 classified briefing for Speaker Nancy Pelosi and House Minority Leader Kevin McCarthy on the subject raised additional questions "including how Rep. Swalwell could be re-appointed to the Committee on Homeland Security one month after this briefing."

"At this time, no information or justification for this assignment has been provided to the Committee on Homeland Security," the letter said. "Such a briefing is necessary because each Committee is responsible for protecting the classified information in its care."

It also notes past comments by Wray, who said China is engaged in a foreign influence campaign that includes "bribery, blackmail and overt deals."

"Given these injurious efforts to target a Member of the Committee, it is imperative that the House Committeee on Homeland Security receive a classified briefing detailing Rep. Swalwell’s relationship with Fang and any potential exposure of classified information," the lawmakers say.